Jihadism: The Radicalisation of Youth 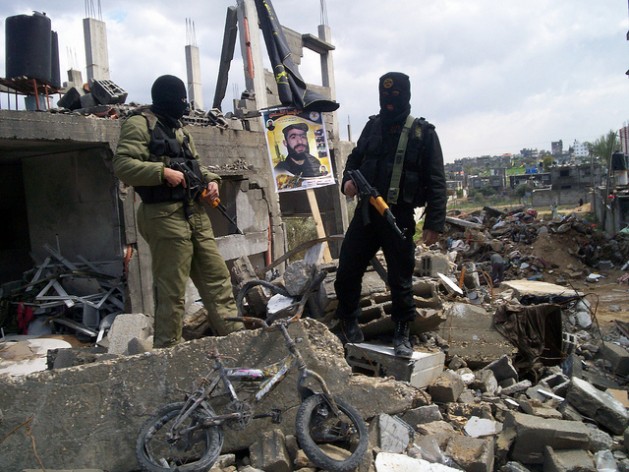 In light of ongoing terror attacks and the relentless recruitment of young fighters, "Jihadism" must be viewed as a critical global problem. Credit: Mel Frykberg/IPS

For a young influential student like Gauher, the professor’s pristine shalwar kameez (a traditional outfit originating in South Asia) , coupled with his regal demeanor, and further accentuated by exhilarating recounts of battle as a Mujahideen fighter in Afghanistan, is exactly what set the mark for Gauher’s future aspirations.

According to the influential professor, the boys in Gauher’s class all had one fundamental duty, that being; to fight all enemies of Islam. His energetic lectures focused more on the condemnation of non-Muslim religious denominations than on the academic syllabus.

Alarmingly, during these “academic” sermons, the professors call for violence was deafening. He legitimised it in the name of honour, otherwise known as “Jihad” which is defined as being a religious struggle against yourself or in society.

The message was clear, if Gauher and his companions did not comply with this age-old “code of violence” they would be deemed as unworthy of “Jihadism”.

Gauher recalls his professor stating that those who did not believe in forceful violence against “heretics” were no better than men who “wear mehendi on their feet and bangles on their wrists”.

“Mehendi” the art of applying temporary henna tattoos is believed to have been used by the prophet Muhammad to dye his beard, therefore, henna cannot be used on feet as a mark of respect to him.

Traditionally, “mehendi” is practiced in the Middle East and in South and South Asia by women for cosmetic purposes.

Given this background, these calculated verbal attacks on a young boys masculinity are what first ignites the fire to prove their manliness and fight in the name of religious “honour”.

Gauher claims that as a young boy the very thought of “Jihadism” was self-actualizing and granted him with a feeling of self-fulfilment.

What started off first as meagre donations to the Jihadi movement, “10 Rupees for Allah” (the equivalent to 15 US cents) that the professor claimed could purchase a bullet that would rip through an infidels chest, subsequently led to a fixation with the idea of martyrdom.

Due to the professor’s subtle forms of indoctrination, Gauher yearned for the opportunity to fight and wage war on the Islamic “enemy”.
Gauher’s story represents one of thousands of cases of young men being led astray by religious leaders.

Thankfully, divine intervention played its part and Gauher still lives to tell the tale of his dip into the world of “Jihadism”.

Now, he advocates for the widespread protection of youth against these indoctrinating “religious” forces.

Gauher lectures on extremism and the process of radicalization. In this sense, his life-changing experience can be viewed as a blessing in disguise. He has used it to inform others and to contribute to the reversal of the growing trend of “Jihadism”.

The key message he strives to disseminate is that the process of radicalization can happen to anyone and at any given moment.
As someone who led a privileged lifestyle, Gauher is fully aware that extremism knows no bounds.

Whether one is underprivileged and illiterate or affluent and worldly, religious Jihadi recruiters know where to strike a chord, leave you unnerved, and willing to succumb to their “pious” demands.

Ironically, the core meaning of “Jihad” has been distorted in recent years, particularly post 9/11 and the consequential war on terror. In reality, The Arabic word “jihad” is often translated as “holy war,” however, in purely linguistic terms, the word ” jihad” actually means struggling or striving.

In a religious sense, as described by the Quran “jihad” has many meanings. It can refer to internal as well as external efforts to be a devout believer, as well as a strong strive to inform people about the faith of Islam.

As a direct consequence of ongoing terror attacks, sensationalism, and anti-Islamic fear-mongering, the term “Jihad” has exploded across global media outlets.

For this reason, misunderstandings of what “Jihad” actually signifies have arisen. It has become associated with violence, brutality, and martyrdom.

It’s fundamental to note that military action only represents one form of “Jihad” which in itself is very rare. Religious extremists have corrupted the meaning of the term “Jihad”. Unfortunately, the media has fed off their distortion of religion.

Indeed, corruption and misinterpretation seem to be at the heart of the extremist movement. In a recent Ted Talk in Lahore, Pakistan, Gauher Aftab analysed the process of radicalization and how extremists target those most vulnerable and susceptible to indoctrination, in other words, children.

Gauher emphasises the fact that in many cases, children are open to radicalization even before they are approached by extremists. In a field study conducted in rural villages in Pakistan by the Paasban Project, 50% of both children and adults believed that violence was a justified means of enforcing one’s opinion. An additional 66% agreed that religious leaders could not lie or do harm.

In this sense, this radical belief system is ingrained into the collective psyche from a young age and the extremist’s work is already partly done.

Undoubtedly, the rise of “Jihadism” must not be seen as a uniquely “Islamic” problem. Non-Muslims are both equally accountable and responsible for the critical global crisis. In fact, 1 in 6 ISIS recruits are Western converts to Islam.

In many cases, Western citizens who feel disenfranchised, isolated and failed by society view extremist groups as their “call for revolution”.

In this way, the media’s scapegoating of the Muslim population in light of ongoing terror attacks is nothing short of a form of Islamophobic sensationalism.

However, in spite of the ongoing rise of terror attacks, there is a strong belief by activists that the growth of Jihadism is not irreversible.

Through a change of heart and mind and a strong advocacy for peace, we can put a stop the “kill and be killed” philosophy sweeping across our radicalised world.

With Open dialogue and a cry for the reform of radicalised education systems, we can steer thousands of young vulnerable men away from violent extremist groups.

Gauher and global peace activists encourage us all, as a united community, to stand our ground in the face of terror.

We must not view the eradication of extremist violence as an impossible task. It is now time to put an end to terror in the name of an “honour” that has led to nothing more than the corruption of youth and the mass killings of countless.