Felix Dodds is a Senior Fellow at the Global Research Institute, a Senior Affiliate at the Water Institute at the University of North Carolina and an Associate Fellow at the Tellus Institute. He has edited or written 14 books his latest (published Nov. 9) 'Negotiating the Sustainable Development Goals: A transformational agenda for an insecure world' was written with Ambassador David Donoghue and Jimena Leiva Roesch. 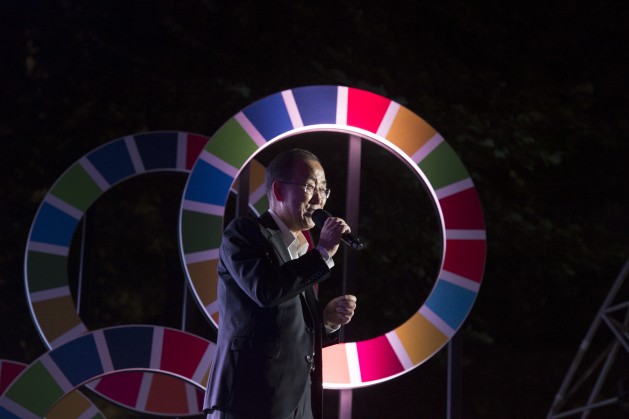 UNITED NATIONS, Aug 31 2016 (IPS) - It’s been almost one year since heads of state and government adopted ‘Transforming Our World: The 2030 Agenda for Sustainable Development’ – the ambitious agenda which contains 17 sustainable development goals (SDGs) and 169 targets during a special session of the UN General Assembly on 25 September 2015.

In fact, 2015 was one of the most important years for multilateral agreements. Not only did the governments sign up to SDGs, they also reached the Paris Climate Agreement and the Addis Ababa Action Agenda as the framework for funding the two policy agendas.

The SDGs were the culmination of four years of negotiations. Starting in July 2011, with the initial proposal by Paula Caballero from the government of Colombia, these negotiations became the most participatory process in UN history.

The vision reflected in the Heads of State Declaration expressed the aspirations of the agenda:

“We envisage a world in which every country enjoys sustained, inclusive and sustainable economic growth and decent work for all. A world in which consumption and production patterns and use of all natural resources – from air to land, from rivers, lakes and aquifers to oceans and seas – are sustainable. One in which democracy, good governance and the rule of law as well as an enabling environment at national and international levels, are essential for sustainable development, including sustained and inclusive economic growth, social development, environmental protection and the eradication of poverty and hunger.”

The Sustainable Development Solutions Network estimate that it will cost $2-3 trillion a year to deliver the SDGs.

However on major criticism levelled at the SDGs and their targets is that they are far too numerous. The reality is that the world of 2015 faced major crises in so many areas that it is difficult to imagine what could have been excluded. Those challenges were also identified to include:

“Global health threats, more frequent and intense natural disasters, spiraling conflict, violent extremism, terrorism and related humanitarian crises and forced displacement of people threaten to reverse much of the development progress made in recent decades. Natural resource depletion and adverse impacts of environmental degradation, including desertification, drought, land degradation, freshwater scarcity and loss of biodiversity, add to and exacerbate the list of challenges which humanity faces. Climate change is one of the greatest challenges of our time and its adverse impacts undermine the ability of all countries to achieve sustainable development.”

Compared to Agenda 21 the outcome from the 1992 Earth Summit, the new SDGs include a firm commitment to gender equity as a goal and targets that address the interlinkages between goals. They add energy, which was not an Agenda 21 chapter, and they focus on clean energy as the way forward. Agenda 21 did not deal with the issue of ‘good jobs and economic growth’ (SDG 8) and ‘resilient infrastructure, promote inclusive and sustainable industrialization and foster innovation’ (SDG 9) nor Goal 10 on ‘inequality’.

The Sustainable Development Solutions Network estimate that it will cost $2-3 trillion a year to deliver the SDGs. In 1992 it was estimated that Agenda 21 would cost $625 billion a year. Decades of inaction explain why the cost has increased so much.

The Addis agreement recognised that the private sector will play a significant role in helping to fund the SDG implementation. One of the criticisms of this is that there wasn’t a counter balance with more oversight of industry.

In part to address this and to be launched on September 21st the President of the UNGA Mogens Lykketoft of Denmark commissioned an expert report that identifies policy strategies designed to shift the flow of capital away from the unsustainable and toward areas of investment that can advance local, national and global efforts to achieve the SDGs, including the climate goal.

The report also addresses the question of how to mobilise financial, goods and services markets to support the SDGs and incorporate environmental, social and governance principles more systematically in to market activities. The expert report is written by Brookings with several informal feedback rounds by experts from within and outside the UN system.

It is vital to remember that the SDGs are a soft law agreement, meaning that governments are not legally required to deliver on the commitments.

One of the promising additions to the monitoring process has been the recognition that parliaments can play a monitoring role on their executives in fulfilling their commitments.

This could be through the use of parliamentary committees and perhaps an annual debate in countries’ parliaments on how national implementation is progressing.

The starting date for the SDGs was 1 January 2016 and even then the indicators for the targets had yet to be agreed and in some cases are still being negotiated. It is far too early to say how much of this agenda is being implemented. It will take until 2018 for official development assistance (ODA) to start to have an impact and so the real opportunity to take stock will be at the 2019 heads of state High Level Political Forum (HLPF).

July’s HLPF saw 22 countries presenting their national reports and a few of the countries – Colombia and Germany – had also started to develop their national strategies. All this should accelerate in the coming years and enable countries working with their stakeholders to create one strategy for this agenda and thus enable much more effective reporting.

Steering the course of global change to a just and sustainable future requires a concerted effort across all sectors. By providing a unifying agenda amidst enormous global diversity, the SDGs are providing the basis for potentially mounting a concerted movement for positive change. To achieve that outcome, the way in which major obstacles such as financing and accountability are overcome will make the difference in securing transformational change.