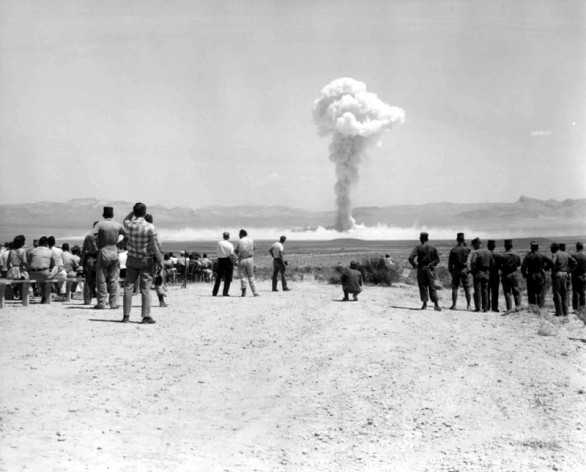 UNITED NATIONS, Aug 29 2016 (IPS) - As Ban Ki-moon readies to step down after completing his two term, 10-year tenure as UN Secretary-General on December 31, he regrets that one of his biggest single disappointments is the “lack of progress on eliminating nuclear weapons.”

A strong advocate of a “world without nuclear weapons,” Ban told a Security Council meeting on August 23 “the disarmament agenda has stalled in several areas,” including continued nuclear testing by North Korea and a proposed multi-billion dollar nuclear modernization programme in the United States.

It was disappointing that progress in eliminating nuclear weapons “had descended into a fractious deadlock, with the return of some of the discredited arguments used to justify nuclear weapons during the Cold War,” he complained.

Historically, the elimination of weapons of mass destruction (WMDs) was a founding principle of the United Nations, and the subject of the first General Assembly resolution over 70 years ago.

Still, the UN continues its relentless campaign against nuclear weapons, including proliferation and testing, spearheaded by the UN Office of Disarmament Affairs (UNODA).

On August 29, the world body commemorated its annual International Day Against Nuclear Tests, the result of a resolutioninitiated by the Republic of Kazakhstan to mark the voluntary closure of its Semipalatinsk Nuclear Test site on 29 August 1991.

The global verification system coordinated by the CTBT office (CTBTO) in Vienna has revolutionised warning systems for earthquakes and tsunami as well as detecting and identifying the very small underground tests.

“When the Comprehensive Test Ban Treaty (CTBT) was adopted by the UN and opened for signature in September 1996, it put a lid on over 2,000 nuclear tests.” said Dr Rebecca Johnson, author of “Unfinished Business”, the definitive analysis on the CTBT’s negotiations, published by the UN in 2009.

In many ways, she told IPS, the CTBT has been extremely successful, as only a handful of tests have occurred since, with India and Pakistan testing in May 1998 and North Korea conducting four tests since 2006.

Moreover the global verification system coordinated by the CTBT office (CTBTO) in Vienna has revolutionised warning systems for earthquakes and tsunami as well as detecting and identifying the very small underground tests by North Korea, said Dr. Johnson, who is also Director, Acronym Institute for Disarmament Diplomacy.

John Hallam, a UN Nuclear Disarmament Campaigner with the Human Survival Project and also People for Nuclear Disarmament, told IPS the provisions for the Entry into Force of the CTBT specify that the Treaty can only enter into force if 44 (named) governments including those of the US, India, Pakistan, and China ratify it. But even 20 years after its initial signing in 1996, it has yet to officially enter into force.

This is in spite of the fact that the powerful network of monitoring stations that the CTBT sets up for the verification of the norm against nuclear testing is in full or almost full operation, he said. It has proved its worth by picking up even the smallest of the tests of the DPRK, Democratic People’s Republic of Korea,(North Korea).

The US, though one of its original signers, has failed to ratify the CTBT because of Congressional opposition, largely from the Republican party, Hallam said.

China, as well as a number of other important countries, say they will ratify the CTBT as soon as the US does so, he added.

Hallam said a proposed UN Security Council resolution, to be initiated by the US, on banning nuclear tests has already provoked a furious reaction from Senate Republican  hardliners such as Senator Bob Corker (of Tennessee), who accuses the Obama administration of exceeding its powers and “going around the back” of the US Senate.

Corker also seems to believe that the 1999 US failure to ratify constitutes some kind of ‘unsigning’ of the CTBT, though it is nothing of the sort, he argued.

“As a signatory, the US continues to be bound by the CTBT’s provisions, and to benefit from the CTBT monitoring network,” Hallam noted.

Tariq Rauf, Director of the Disarmament, Arms Control and Non-Proliferation Programme at the Stockholm International Peace Research Institute (SIPRI) told IPS the first nuclear explosive device was detonated on 16 July 1945 at the Alamogordo Test Range in the desert of New Mexico (USA).

In the intervening seven decades, nine different States have carried out 2,061 nuclear explosions polluting the world’s oceans, the atmosphere and the land with devastating health effects on many millions of people and the environment.

Suffering from the radiological effects on human health and the environment, in 2009 Kazakhstan took the initiative in promoting the adoption of 29 August as the International Day Against Nuclear Tests by the United Nations General Assembly on 2 December 2009 through Resolution 64/35.

The Soviet Union had detonated 456 nuclear explosions at the Semipalatinsk Polygon nuclear test site in Kazakhstan, between 1949 and 1989, that led to lasting major genetic damage to the nearby population and contaminated thousands of hectares of land rendering it unusable for generations, said Rauf, who previously served as Expert Trainer at the CTBTO (2013) and Head of Verification and Security Policy Coordination the International Atomic Energy Agency (2002-2011).

Of the 2061 nuclear tests, 530 were detonated in the atmosphere resulting in the release of large quantities of radioactive materials, such as Iodine-131, Cesium-137 and Strontium-90.

North Korea is the only country to have carried out nuclear tests in this century. Before declaring unilateral testing moratoria, the last nuclear explosive tests carried out were: by the USSR in 1990, the UK in 1991, the USA in 1992, China and France in 1996, and India and Pakistan in 1998 – North Korea has not yet announced an end to its nuclear testing.

Dr Johnson told IPS the test ban treaty lacks the final stamp of legal force because of diplomatic mistakes made in 1996, which set the barrier to entry into force far higher than any comparable treaty in history.

Any other agreement with the CTBT’s record, signed by over 180 countries and ratified by over 160, would be considered very successful.

To all legal, political and diplomatic intents and purposes, nuclear tests are completely banned, she noted.

“In context, we see treaties as legal and normative steps, not 100 percent guarantees, and so they all require constant political vigilance,” said Dr Johnson, who is also the UK Green Party Spokesperson on Security, Peace and Defence.

“With or without the final entry into force, we have to fully implement and enforce that ban, which also means putting pressure on the US, China, India, Pakistan, North Korea, and a couple of other hold-outs to join and ratify the treaty,” she declared.

The CTBT was an important step, and it will be greatly reinforced now the majority of states are recommending that negotiations start in 2017 on a more comprehensive legal instrument to prohibit all nuclear weapons.

That’s the next step, building on the Non Proliferation Treaty (NPT) and CTBT, while also learning lessons from gaps left when those treaties were negotiated, Dr Johnson added.