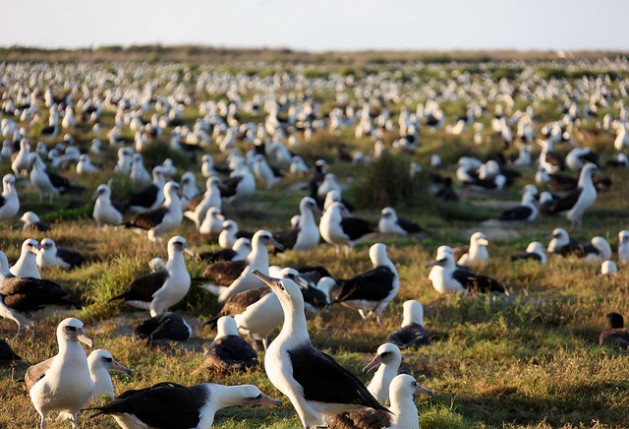 HONOLULU, Hawaii, Sep 2 2016 (IPS) - A congress billed as the world’s largest ever to focus on the environment has opened to warnings that our planet is at a “tipping point” but also with expressions of hope that governments, civil society and big business are learning to work together.

“The world must move from random acts of kindness to strategic conservation." -- Sally Jewell, U.S. Secretary of the Interior

“Ambitions for this conference are very high…It is the largest environmental gathering ever,” she said after the Sep. 1 opening ceremony.

The Swiss-based International Union for Conservation of Nature was founded in 1948 by British biologist Julian Huxley, and brings together its members – including governments, NGOs, scientists and the business community – in a congress every four years where motions and resolutions are put to a vote. Although they might not carry the weight of international law, the findings of the IUCN have gone on to form the basis of legislation in member states and international bodies.

Focused on the theme of “Planet at a crossroads”, speakers at the opening ceremony held in a Honolulu sports arena reminded participants that the main goal was to come up with concrete proposals and measures to help implement the two historic international agreements forged last year – the United Nations Sustainable Development Goals and the Paris Agreement on climate change.

IUCN president Zhang Xinsheng, a senior Chinese politician and former senior UN official, set the tone of collaboration by praising U.S. President Barack Obama for establishing the world’s largest nature sanctuary – more than half a million square miles – in the waters and islands of the northwest Hawaiian archipelago. “President Obama has set a high bar,” Zhang said. This congress, he added, was not just about “avoiding tragedy” but working together.

His comments followed remarks made by Obama at a meeting of Pacific leaders in Honolulu on Wednesday night, raising expectations that China and the US may soon announce they intend to formally join the Paris Agreement. China opens a meeting of the G20 industrialised nations on Friday.

With the IUCN venue being Hawaii – renowned for its rich biodiversity but also as the world’s “extinction capital” for the large numbers of its eradicated or dying species – there was also emphasis, reinforced by performances of traditional songs and dance, on the importance of the age-old practices and wisdom of indigenous peoples.

Palau’s President Tommy Remengesau was given rock star acclaim at the congress for his pioneering environmental policies proving that small nations can make a difference. Remengesau in turn praised Obama who on Thursday was meeting scientists at Midway Atoll in his newly expanded Papahanaumokuakea marine sanctuary. Former president George W. Bush first set up the reserve 10 years ago but Obama quadrupled its size by executive order last week, although the US military will continue to hold exercises in the waters.

“This cements his legacy as an ocean leader,” Remengesau said and challenged the U.S. to follow the example of Palau in the western Pacific by turning 80 percent of its maritime economic exclusion zone into protected waters. Noting that despite the vast size of Papahanaumokuakea only 2 percent of the world’s waters are designated as marine sanctuaries, Remengesau said Palau would put forward a motion to the IUCN congress that this figure be raised to 30 percent.

Erik Solheim, head of the UN Environment Programme, noted the warnings that mankind is destroying its only home but went on to dwell on the progress being made. Brazil, he said, had dramatically reduced its rate of deforestation while Costa Rica had doubled its tree cover.

He singled out French oil company Total for abandoning oil exploration plans in the Arctic and also praised Kellogg, Unilever and Nestle for “leading the politicians” on environmental policies. China, he added, was rapidly moving to “green” financing while Germany, on some days, was producing all its energy from renewables.

As for Obama and his marine reserve, Solheim simply said, “How much we will miss this president when he leaves office.”

Sally Jewell, U.S. Secretary of Interior, suggested that the Papahanaumokuakea example could be followed by similar initiatives for the territories of indigenous people’s on the U.S. mainland.

“The world must move from random acts of kindness to strategic conservation,” she added, noting research showing that a “football field” of natural areas disappears every two minutes in the U.S.

She and other speakers also stressed the need for the congress to come up with further measures to tackle what Jewell called the “scourge” of wildlife trafficking. “The U.S. is part of the problem and must be part of the solution,” she said.

Hawaiian Senator Brian Schatz appealed to scientists working in IUCN’s special commissions to help tackle the devastation by a mysterious fungus of Hawaii’s most established canopy tree, the ‘ohi’a. More than 34,000 acres are affected, earning the disease the name “rapid ‘ohi’a death”. Experts in Hawaii were facing “the fight of their professional lives”, he said, adding, “Every community has its own battles.”

On Sep. 4 the Congress will also unveil the updated IUCN Red List of Threatened Species, said to be the most comprehensive information source on the global conservation status of flora and fauna. An Ocean Warming report is to be launched on Sep. 5.