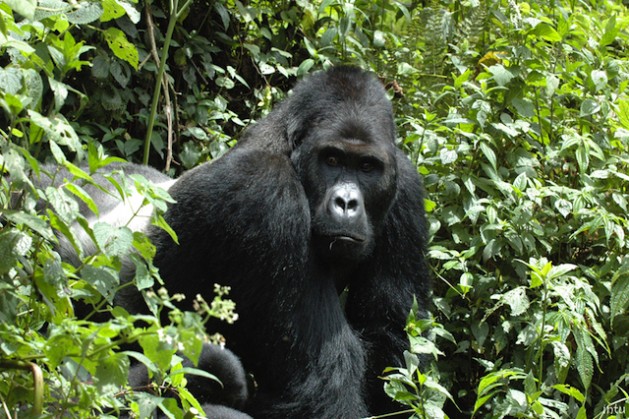 HONOLULU, Hawaii, Sep 4 2016 (IPS) - Our closest cousin in the animal world, the Eastern Gorilla, is sliding towards extinction because of illegal hunting, the IUCN announced today in the latest update of its Red List of Threatened Species.

“Today is a sad day as the Red List shows we are wiping out our closest relative,” Inger Andersen, director general of the International Union for Conservation of Nature, told a news conference in Honolulu where the IUCN is holding its World Conservation Congress.

“We are losing species at a faster pace than ever." -- Inger Andersen, director general of the International Union for Conservation of Nature

The Eastern Gorilla, the largest living primate found in the rainforests of Rwanda, Uganda and the Democratic Republic of Congo, was moved from Endangered into the Critically Endangered category – one step away from extinction.

The Eastern Gorilla, made up of two sub-species, has suffered a devastating population decline of more than 70 percent in two years and is now estimated to number fewer than 5,000, IUCN said. Its greatest threat is illegal hunting. Four out of six great ape species are now listed as Critically Endangered. The other two – chimpanzees and bonobo – are listed as Endangered.

The IUCN Red List, updated twice a year, now covers some 82,954 species on our planet, of which 23,928 are threatened with extinction. The target is to increase that coverage to 160,000 species by 2020. The list is seen as a “barometer of life” and is the world’s most comprehensive source of information on the global conservation status of plants, animal and fungi species. The list plays a major role in influencing government and civil society on conservation goals and policies.

“We are losing species at a faster pace than ever,” Andersen said. The latest findings made it imperative for governments, scientists and society at large to reverse the trend, she said.

The latest update did reveal some progress, however, particularly in China, thanks to the Chinese government’s efforts to stop illegal hunting and the degradation of habitats.

The Giant Panda, perhaps the conservation movement’s most iconic animal and the logo of WWF, was moved down one category to the status of Vulnerable from Endangered. The Tibetan Antelope, its hide prized in the international luxury shawl market, was classified as Near Threatened rather than Endangered.

IUCN said the Giant Panda population had grown due to effective forest protection and reforestation and a successful linking up of previously separated panda populations. Hunting was also reduced. However the IUCN warned that some scientific models predicted that climate change would eliminate more than 35 percent of the panda’s bamboo habitat over the next 80 years, reversing the gains made over the last two decades.

“The Chinese government’s plan to expand existing conservation policy for the species is a positive step and must be strongly supported to ensure its effective implementation,” IUCN said.

Developed countries with greater funding had a stronger record of protecting species and it was noteworthy that the Chinese government and people were having success, commented Simon Stuart, chair of the IUCN species survival commission.

Joseph Walston of the Wildlife Conservation Society which was involved with efforts to protect the Tibetan Antelope, noted that its population – which collapsed from around one million to some 70,000 in the 1980s and 1990s – had been threatened because of demand for its products in luxury markets outside China.

“China did something about it. This is an important precursor,” he said. He expressed the hope that China would now play a positive role in saving species of other countries that were threatened because of demand inside China. Just one notable example is the pangolin – an ant-eating creature whose meat is prized on the dinner table and its scales in medicine.

“China is a net consumer of the world’s wildlife at the moment,” Walston told IPS. “We all did it,” he added, noting how Britain and the United States had been huge destroyers of species during their period of industrialisation and rapid economic growth. He said the emergence of middle classes and a consciousness about the importance of nature and environment had been a critical factor in the west. “This process is starting in China, but too slowly,” he commented.

Carlo Rondinini, a biologist at Rome’s La Sapienza University working for the IUCN Red List, warned that the trend for mammals was still downward.

“We are the only species of Great Ape not threatened with extinction,” he said.

The latest update showed that the once abundant Plains Zebra, hunted for its meat and hide, had been reduced by about a quarter over the past 14 years to just over 500,000 animals. IUCN moved it to Near Threatened from Least Concern. Three species of antelope in Africa were also added to Near Threatened.

But one other success story in the animal world was Australia’s Greater Stick-nest Rat, a unique nest-building rodent whose resin is so strong that it can last for 1000 years if not exposed to water. A successful species recovery plan, involving reintroductions and some movements to predator-free areas, took the species from Vulnerable to Near Threatened. The Bridled Nailtail Wallaby also moved down a category, from Endangered to Vulnerable, after a successful but expensive translocation conservation programme.

IUCN experts noted that such programmes involved considerable funding and effort, underscoring the need for the world to put more financing into conservation.

Hawaii, which is hosting the congress, held every four years, is seeing a rapid loss of its biodiversity, especially in plant life because of the introduction of invasive species. The Red List update assessed 38 of Hawaii’s endemic plant species as extinct, with four others listed as Extinct in the Wild, meaning they only occur in cultivation.