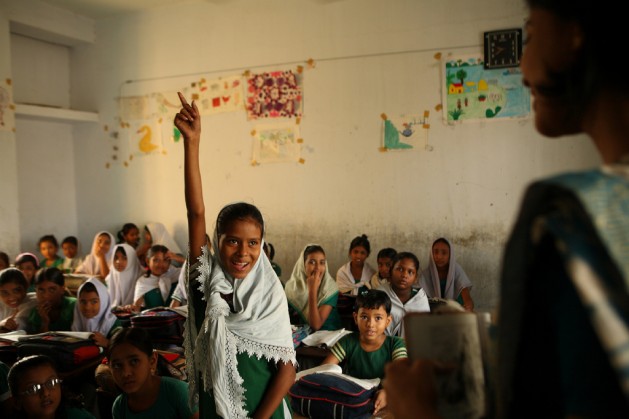 UNITED NATIONS, Sep 14 2016 (IPS) - The importance of education in the promotion of peace, sustainable development and human dignity, and the prevention of violent extremism, was the focus of a Global Citizenship Education Seminar at UN headquarters in New York on Friday September 9.

“Global citizenship is already happening, and what we need to do is learn from those examples and scale them up,” said Professor Fernando Reimers, Ford Foundation Professor of Practice in International Education, delivering the seminar’s keynote speech.

He spoke about the need to develop “a sense of self that is not threatened by the reality of globalization,” and of the importance of “coming into contact with people along many lines of difference”.

“All the barriers, all the boundaries we have invented to define our identities, are really in the end quite irrelevant,” Reimers urged.

“The heartbeat of citizenship is participation,” said Ravi Karkara, Senior Advisor to the Assistant Secretary-General and Deputy Executive Director at UN Women. The central building block of this participation was pithily defined by Reimers, saying: “I mean getting kids to engage in the business of reducing poverty.”

Karkara was especially clear on the importance of engaging not only young people, but young women, in the pursuit of educating and empowering global citizens. “I think we have to understand any conversation on counter-terrorism and extremism from a masculinity and toxic masculinity perspective,” he said. “Arms production companies are controlled by men; it is ISIS which is mostly men.”

“All the barriers, all the boundaries we have invented to define our identities, are really in the end quite irrelevant,” -- Fernando Reimers

Though collaborators were occasionally at variance with one another on certain of the conference’s key themes, participants concurred that global citizenship is above all about engaging young people.

“We should encourage and trust our young people in every society,” said Croatian Ambassador Vladimir Drobnjak. Many speakers drew attention to the importance of technology in reaching out to societies’ youth, but UN Women’s Karkara also emphasised the need to counterbalance the use of technology with offline methodologies: “it’s the most marginalised who don’t have access to mobile phones, who don’t have access to public transport,” he said.

A significant theme was the interconnection between action on local and global planes, and the significance of both together for the full participation of young people in the building of peace, a relationship that has often been coined ‘glocalising’.

“When you engage in local action to advance any of the SDGs you are also engaging in a global action,” said Reimers.

Contributing to this theme, Lyndal Rowlands, speaking on behalf of Inter Press Service as Chief of IPS’ UN Bureau, asked pertinent questions about the role the media has to play in the education of global citizens. “Many of us who consider ourselves informed global citizens are not having the conversations that we need to have,” she said, reminding audience members and participants alike that far from being a simple project, there are in fact “many people who are strongly saying they don’t want to be global citizens”.

The idea of a global citizen, a person who identifies more strongly with a global community and with universal values than with a particular nation or place, is a useful, though by no means settled or straightforward, means of navigating an ever-more globalised world – in which unprecedented migration, the sovereignty of multinational corporations, international political interventions and the multi-actor conflicts they address – are increasingly normal parts of citizens’ existence.

Global citizenship is enshrined in such value systems as universal human rights, a history which Reimers traced during the seminar. The concept of global citizenship was formalised in the UN Secretary-General Ban Ki-moon’s 2012 ‘Global Education First Initiative’, central to achieving Goal 4 of the Sustainable Development Goals.

As advocated by the talk’s convener, Oh Joon, Ambassador and Permanent Representative of Republic of Korea to the UN, global citizens identify more with the broad class of ‘humanity’ than with national peers, prioritising international cooperation and inclusion over national self-interests. All people must, Joon said, “think critically about our responsibilities both to our planet and ourselves. In many ways a paradigm shift is needed to guide our decisions.”

Jordanian Ambassador Sima Bahous, quoting Queen Rania, left the audience with a memorable call-to-action, saying: “whereas national citizenship is an accident of birth, global citizenship is an act of will… It requires that we take time to learn about the world beyond our borders – its merits, challenges and injustices – and our role and responsibility in it. It requires moral courage and a commitment to step up and make a difference.”