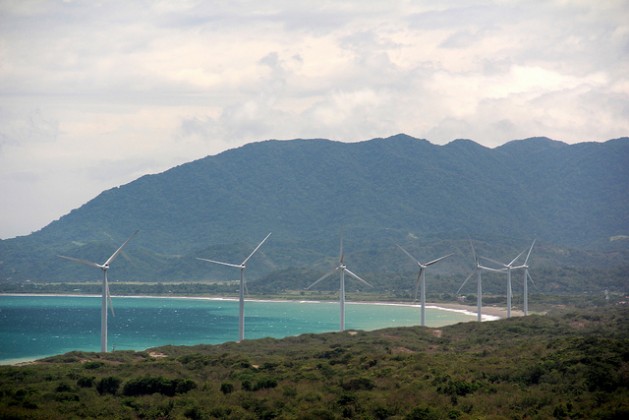 The Bangui Wind Farm located in the northern Philippines hosts 20 wind turbines with a capacity of 33 megawatts. Credit: Kara Santos/IPS.

UNITED NATIONS, Oct 12 2016 (IPS) - The world will need to more than double its current infrastructure stock over the next 15 years – a massive undertaking which could either contribute to or combat catastrophic climate change – according to a new report.

Two thirds of the 90 trillion dollar infrastructure investment needed will be in developing countries, the Global Commission on the Economy and Climate noted in the Sustainable Infrastructure Imperative Report.

“The types of infrastructure we build – coal power plants vs. wind farms and solar arrays, for example, or mega-highways vs. public transit systems – will determine whether we stay on a high-carbon growth path or move towards a climate-smart future,” the report said.

Despite the massive price tag, the commission of global experts said that much of the money could be easily accessed by ending incentives to build dirty infrastructure, from fossil fuels to urban sprawl.

The report’s authors, including economist Lord Nicholas Stern, also emphasised that investing in green infrastructure can contribute to economic growth.

“Economic growth and climate action are mutually compatible,” Stern who is co-Chair of the Commission told journalists. “We emphasise and demonstrated with solid economic evidence that we can do both.”

Additionally, the commission found that only a small additional investment is needed to ensure that the over $90 trillion worth of infrastructure which needs to be built over the next 15 years contributes to rather than undermines climate change efforts.

“Developing countries, such as those in Asia and Africa, need infrastructure to improve access to basic services, drive development and meet the needs of rapidly-urbanising populations and an expanding middle class,” the report said.

Lal Kidwai said that the good news is that developing countries can “leap frog” a lot of the problems encountered by developed countries who built their infrastructure with older technologies and designs.

“A lot of the investment can be designed to be a lot more new age than we have seen in the past,” she said.

Developing countries may be able to use climate financing – funds committed by rich countries to help poorer countries fight climate change – to help make their infrastructure investments greener, however the report’s authors noted that this will not be the main source of funding.

“The hundred billion dollars in climate finance is absolutely essential and it is important for catalytic investments to really shift in the right direction,” Helen Mountford, Program Director of the New Climate Economy told IPS.

“What we’re focusing on here through the report of the global commission is that question of the trillions… “all of those investments need to go in a direction which help support growth, which help support, social and development goals and which support climate action.”

Some four to six trillion dollars of infrastructure investment is expected to come from China’s One Belt One Road initiative, the report noted. The initiative aims to build and connect infrastructure across Asia, Europe and Africa.

“China’s One Belt One Road initiative is a prime example of a major, yet nascent and untapped opportunity to deliver environmental and social sustainability alongside economic development,” the report said.