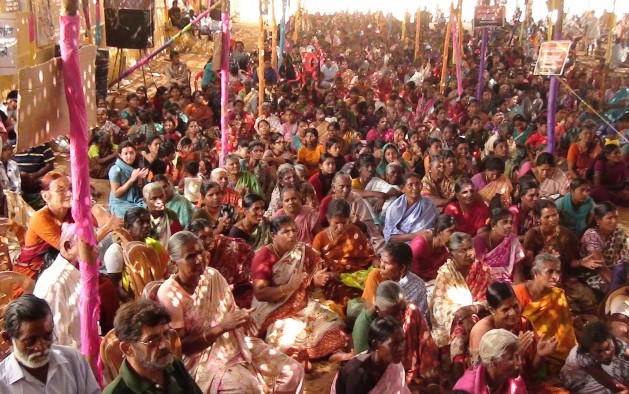 JOHANNESBURG, Oct 5 2016 (IPS) - Civil society has been described as the oxygen of democracy by no less than UN Secretary General, Ban Ki-moon. As the world’s largest democracy, India has a proud history of inspiring people’s movements and non-profit organisations looked up to by social change advocates across the globe.

Yet, recent incidents of vilification and harassment of civil society activists and their organisations have escalated to such an extent that the country’s international reputation as a successful multi-cultural democracy, able to accommodate diverse opinions is at stake.

And it need not – it should not – be so. Civil society has played a crucial role in India’s socio-political evolution in the pre and post-independence eras. In the nineteenth century, Jyotirao and Savitri Bai Phule led the movement for women’s empowerment and an end to caste based discrimination while Raja Rammohan Roy challenged child marriage and Sati. This tradition of social justice advocacy has continued in the 21st century. The 2005 Right to Information Act which draws from the best of international legislation grew out of a civil society led national campaign by anti-corruption activists. The 2006 Protection of Women from Domestic Violence Act, is another example of progressive legislation pioneered by civil society.

The Foreign Contributions Regulation Act has been condemned by no less than three UN experts as failing to comply with international human rights norms and standards.

On the international stage, India’s vibrant civil society often characterised as a barometer of the country’s democratic health has long been an important source of its soft power. When the UN Declaration of Human Rights was being drafted in 1948, Hansa Mehta drew on her social activism to ensure that the first clause expressly stated that all human beings rather than just ‘men’ are created equal in dignity and rights. In Mahatma Gandhi, India produced perhaps the most prominent civil society activist of the twentieth century. Many of today’s international civil society leaders come from the country.

The current head of Amnesty International is Indian. But that hasn’t protected the organisation from a situation of having to temporarily close its offices in the face of threats and dubious accusations of promoting sedition for highlighting human rights violations. Fueled by such increasingly regular incidents, several well-respected voices, both within and outside India, are condemning the climate of intolerance that now weighs heavily upon the country whose Bill of Rights has provided a human rights template for the constitutions of several other states.

On his recent visit to South Africa, Prime Minister Narendra Modi was presented with an open letter urging an end to the harassment of Lawyer’s Collective, an Indian non-profit organisation that has played a pioneering role in advancing women’s rights, rights of people living with HIV and access to affordable medicines. To fulfil its mandate, Lawyer’s Collective relies on international philanthropy much in the same way that corporate entities rely on foreign direct investment. Nevertheless, Lawyer’s Collective’s permission to receive international funding has been suspended under the infamous Foreign Contributions Regulation Act (FCRA) thereby crippling its work.

The FCRA has been condemned  by no less than three UN experts as failing to comply with international human rights norms and standards.  First conceived during the ‘Emergency’ of 1975-77 when democratic freedoms were suspended by Mrs Indira Gandhi’s Congress Party Government, the FCRA subjects non-profit organisations to a complex maze of bureaucratic requirements and arbitrary discretion to receive resources from international philanthropic institutions or development agencies. Its use of vague terms such as ‘security, strategic, scientific or economic interest of the state’ offers a convenient excuse to choke the funding of organisations uncovering inconvenient truths about high level corruption or rights violations.

Ironically, while several public spirited groups engaged in social justice initiatives are being harassed under the FCRA, senior government officials are courting foreign direct investment in the private sector through the ‘Make in India’ programme. The enhanced – and unfair – scrutiny of civil society for receiving international funds has fueled deceptive characterisations of activists as somehow working at the behest of outside forces; a misnomer in a country where to be employed by a multinational corporation is a popular middle class aspiration supported by the political class and the ruling Bharatiya Janata Party government.

As India’s political and economic influence increases globally, developments in the country are being closely followed by the international community. Arguably, India’s quest to play a critical role on the international stage would be better served by recourse to its historical commitment to innate democratic values and support for people’s struggles. Notably, in July this year, India’s diplomatic representatives voted in favour of a UN resolution urging states to create and maintain a safe and enabling environment for civil society but worryingly sought to disassociate the country from text urging civil society funding provisions to be in compliance with international human rights obligations.

A further rebuke to the international system was delivered on September 16 by the country’s security apparatus when Khurram Parvez, coordinator of the Jammu and Kashmir Civil Society Coalition was arbitrarily prevented from boarding a flight to attend the UN Human Rights Council session in Geneva. He was later arrested and detained under the notorious Public Safety Act which allows preventive detention without due process. Arguably, such petty behaviour weakens India’s standing in international forums. A mature democracy should not only be able to accommodate dissent but rather point to it as evidence of the robustness of its institutions.

With its inspiring constitution born out of its heroic freedom struggle, India should be championing not undermining civil society freedoms at home and abroad. After all, social and political pressures are best released by enabling constructive activism and engagement. In the end India’s democracy will be strengthened by diversity of opinion and allowing space for critical views.