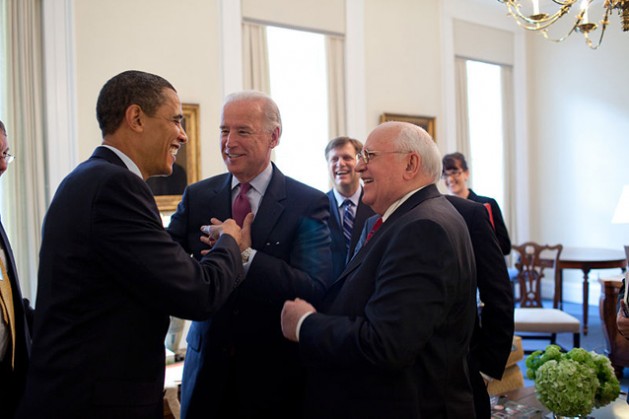 OSLO, Oct 28 2016 (IPS) - President Mikhail Gorbachev, former leader of the Soviet Union and recipient of the 1990 Nobel Peace Prize, has appealed to world leaders to reduce the dangerous tensions, which today threaten to plunge human civilization and the biosphere into an all-destroying nuclear war.

In an October 10 interview with RIA Novosti, Gorbachev said: “I think the world has reached a dangerous point, I don’t want to give any concrete prescriptions, but I do want to say that this needs to stop. We need to renew dialogue. Stopping it was the biggest mistake.”

“It is necessary to return to the main priorities. These are nuclear disarmament, the fight against terrorism, the prevention of an environmental disaster,” he continued. “Compared to these challenges, all the rest slips into the background.”

Later the same day, in Iceland, President Gorbachev said: “The worst thing that has happened in recent years is the collapse of trust in relations between major powers, The window to a nuclear weapon-free world…is being shut and sealed right before our eyes.”

“As long as nuclear weapons exist, there is a danger that someday they will be used as a result either of accident or technical failure or of evil intent of man, an insane person or terrorist,” Gorbachev said.

Alyn Ware, the International Co-ordinater of Parliamentarians for Nuclear Non-proliferation and Disarmament, commented:

“I would concur with the assessment of Gorbachev.”

“I have been at the UN General Assembly October sessions (Disarmament and International Security) every year since 1988. This year was the most acrimonious I have ever seen. The tensions between Russia and NATO/Ukraine/US spilled over into the deliberations with accusations and counter accusations flying in many of the sessions. And these were not the only tensions. Syria/Yemen/Middle East, India/Pakistan and North Korea v South Korea/Japan/USA were also vitriolic towards each other.”

“Tension reduction, confidence building and diplomacy are vital at this time”, Alyn Ware continued, “Without this, disarmament is unlikely to occur and further armed conflict is very likely.”

Hope that the current extremely dangerous tensions can be reduced comes from the appointment of former Portuguese Prime Minister Antonio Guterres as the new UN Secretary General. The Security Council was united in making this appointment, thus giving us hope for better cooperation in the future.

In an interview with the BBC, Mr. Guterres said that ending the conflict in Syria would be one of his greatest challenges. “I believe it is the international community’s first priority is to be able to end this conflict and use this momentum created by it to try to address all the other conflicts that are interlinked,”

“I hope people will understand that it’s better to put aside different opinions, different interests and to understand that there is a common, vital interest to put an end to these conflicts, because that is absolutely central if you want to live in a world where a minimum of securities are established, where people can live a normal life,” he said.

Nuclear War Would Be a Catastrophe

The environmental consequences of a massive exchange of nuclear weapons have been treated in a number of studies by meteorologists and other experts from both East and West.

They predict that a large-scale use of nuclear weapons would result in fire storms with very high winds and high temperatures, which would burn a large proportion of the wild land fuels in the affected nations.

The resulting smoke and dust would block out sunlight for a period of many months, at first only in the northern hemisphere but later also in the southern hemisphere.

Temperatures in many places would fall far below freezing, and much of the earths plant life would be killed. Animals and humans would then die of starvation.

Professor Bernard Lowen of the Harvard School of Public Health, one of the founders of the International Physicians for the Prevention of Nuclear War (IPPNW), said in a recent speech:

“…No public health hazard ever faced by humankind equals the threat of nuclear war. Never before has man possessed the destructive resources to make this planet uninhabitable… Modern medicine has nothing to offer, not even a token benefit, in the event of nuclear war…”

“We are but transient passengers on this planet Earth. It does not belong to us. We are not free to doom generations yet unborn. We are not at liberty to erase humanity’s past or dim its future. Social systems do not endure for eternity. Only life can lay claim to uninterrupted continuity. This continuity is sacred.”