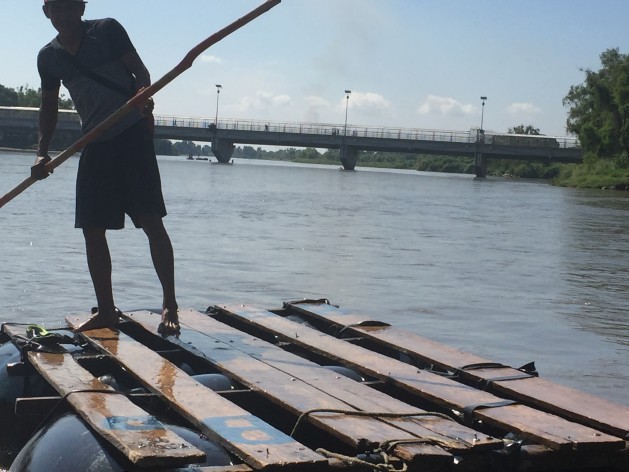 The Suchuiate River crossing between Mexico and Guatemala. Those with visas cross the bridge, and those without visas – including people fleeing violence from Central America – have to take a makeshift tyre raft. Credit: Madeleine Penman / Amnesty International.

MEXICO CITY, Nov 30 2016 (IPS) - Ten years ago I arrived in Mexico for the first time. A heavy backpack strapped around my waist, I toddled over a large, concrete bridge that divides Mexico and Guatemala.

When I crossed the border, a man with his shirt unbuttoned down to his belly and sweat pouring down his chest took my passport, glanced at it for no more than two seconds, then stamped it with a smile and cheerily barked to me “welcome to Mexico.”

My entry into Mexico couldn’t have been easier, because I’m from Australia and don’t need a visa. But for hundreds of thousands of men, women, children and entire families fleeing violence and crossing Mexico’s southern border from some of the most dangerous corners of the world, it is a very different story.

Instead of a smile, they will face unfounded suspicion, fear, prejudice and even hate.

Knowing full well of the likelihood of being denied entrance and, instead, facing possible deportation to the war-like horrors and violence in Honduras and El Salvador, many are effectively forced to enter clandestinely. 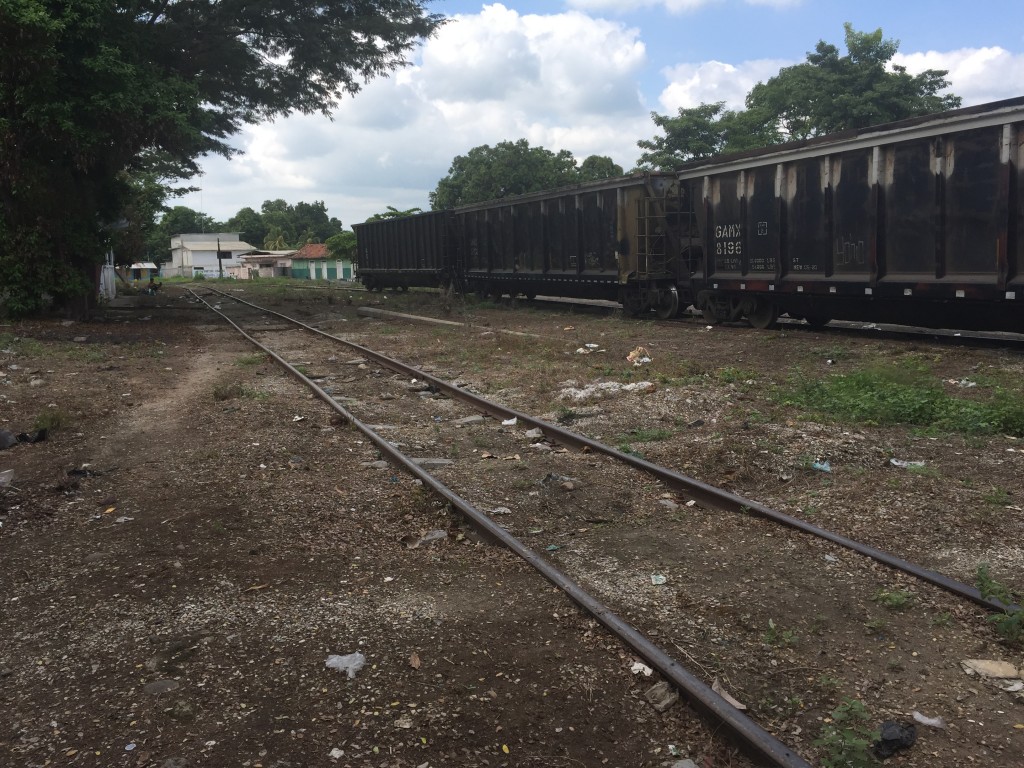 One of the routes that migrants and asylum seekers are forced to take through Mexico includes travelling atop these freight trains and risking their lives. Credit: Madeleine Penman / Amnesty International.

Ten years after I used this border crossing for the first time, I came back as part of an international observation mission and have spoken to dozens of people whose lives have been turned upside down. We spoke to a man in a wheelchair who had lost both of his legs when he fell off the freight train dubbed “The Beast” that migrants and asylum-seekers travel on top of to get through Mexico. He was taken to a hospital in Mexico, who then referred him to Mexican migration authorities. He told us that migration authorities ignored his request to lodge an asylum claim and deported him back to Honduras straight away. He said he spent just four days there, fearing for his life, and then came back to Mexico immediately. He had still been unable to lodge an asylum claim given his fear of being detained.

Some 400,000 people are estimated to be crossing Mexico’s southern border every year. Many of these are in need of international protection, and the United Nations High Commissioner for Refugees has called on governments in the region to recognise the humanitarian crisis affecting the Central American countries of El Salvador, Honduras and Guatemala.

Amnesty’s own research has shown how the generalised violence in El Salvador and Honduras makes them some of the deadliest places on the planet. A few days ago, I spoke to a young fisherman from El Salvador who had fled his country with more than 30 members of his family because the extortions and war taxes that criminal gangs imposed on them at home, and impose on entire industries in El Salvador in order to let them operate, made living there impossible. Saying no to gangs (“maras”) often means a death sentence.

Mexico has a history of receiving people fleeing violence and showing solidarity and hospitality to those in need of protection.

In the 1980s, tens of thousands of Guatemalans fled civil war and came as refugees to Mexico. Thirty years later, Mexico seems to be forgetting this welcoming face. On mission, well after we crossed the border and were inside Mexican territory, in a stretch of just two hundred kilometres along the coast of the southern state of Chiapas, we went through seven migratory control checkpoints that at times includes military personnel, federal police and many migration agents ready to detain anyone without papers.

Mexico has invested significant resources in enforcement and security along its southern border in recent years. Some of this money comes from US government funding from the Merida Initiative, an extensive security assistance package. 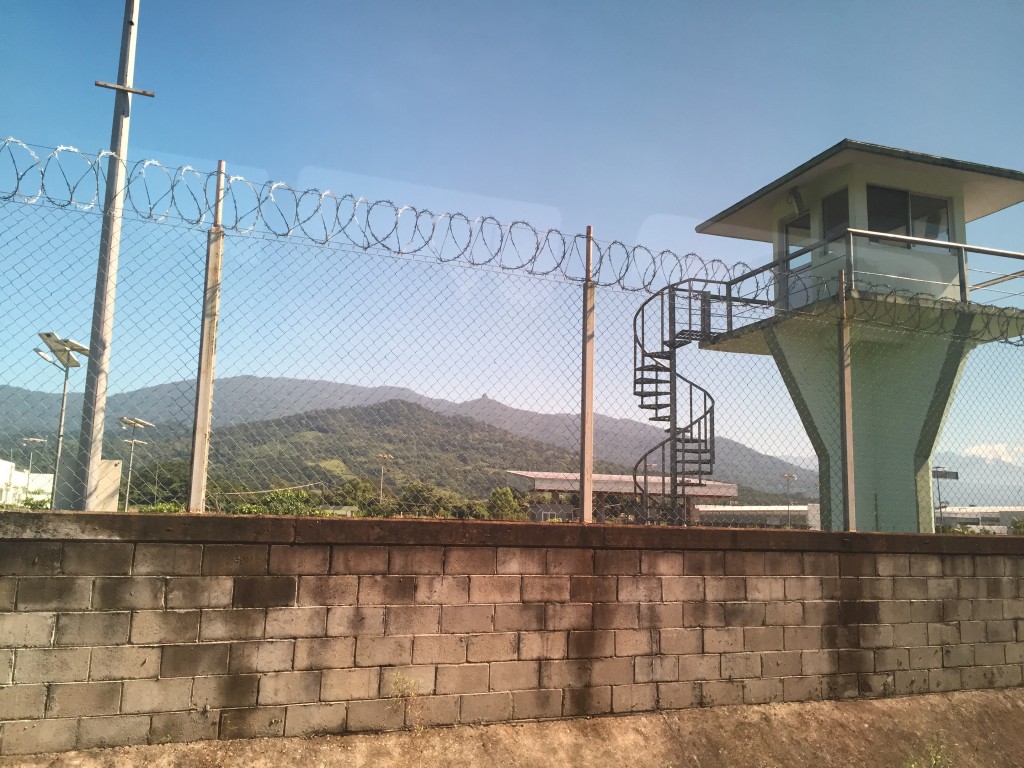 The increase in checkpoints and security has resulted in a spike in detentions and deportations of Central American people from Mexico, in many cases returning people to threats, attacks and even killings. Of all the checkpoints I passed through, one of them stood out in particular.

It was a special customs control centre that stood out on the highway like an enormous spaceship, airport, or prison. It had Federal Police officers, an army barracks, customs, bright lights, watch towers, and an incredible amount of infrastructure.

The problem with this focus on detentions, enforcement, security and deportations is that many people who are in danger and should be recognised as refugees are not being identified by Mexican migration agents.

Under international and domestic law, migration agents are obliged to refer anyone who expresses a fear of returning to their countries to Mexico´s refugee agency, COMAR – Comisión Mexicana de Ayuda a Refugiados.

However, the vast majority of people are detained and returned to their countries with their fears being overlooked. Why is this so? Do authorities really think that traumatised people fleeing their countries are such a threat? Are they hearing their stories?

I met a woman who told me that in Honduras, as a woman, she couldn’t wear skirts, tights, she couldn’t dye her hair, she could barely do anything without gangs threatening her. She spoke to me on the side of the road, with no money, waiting to move to find transport that could take her to a safer place. Others from El Salvador told me that just transiting between one neighbourhood and another put you at risk, as gangs would suspect you as a possible rival for being an outsider.

We are living in a time of extreme hate and fear. Unless we listen to people´s stories and act, our societies and policies will continue to create walls of prejudice rather than bridges of protection and justice. After this trip along Mexico’s southern border, more than ever I pledge to welcome refugees, in my heart and in my society. I hope you can look into their eyes and welcome them too.