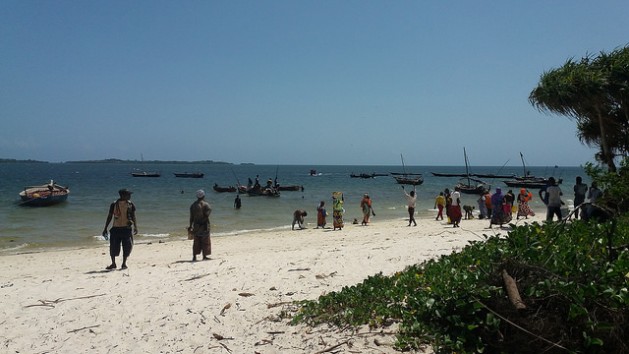 KWALE, Kenya, Nov 28 2016 (IPS) - It’s Saturday morning and Hafsa Juma* is seated on a traditional mat known locally as a mkeka under the scorching sun outside her homestead, located near Gasi Beach on the Kenyan coast.

Clad in a traditional Swahili dress known as a dera, complemented by a mtandio wrapped around her head, Hafsa, 15, says she has been suffering from flu and headaches for more than a week. She hoped the hot sun might ease her chills and shivering, since her parents are unemployed and too poor to pay for a doctor visit.

Hafsa is one of many girls who barter their bodies for fish and a little money at Gasi Beach on the Indian Ocean, in Kwale County. The oldest of three siblings, she is the breadwinner for her family.

Living near the beach, she is easy prey for male fishermen. She said started sex work two years ago.

“I completed standard eight [the final year of primary school] in 2014,” she said. “My parents are not well and that is why there is no food to eat at home. I’m forced to go and look for something small to bring home. I leave at around 8 p.m. and I come back to the house at around 12 a.m. Every night, I have one client. After he agrees to my demands, he gives me 200 shillings (about two dollars) and half a kilogramme of fish,” she said, avoiding eye contact.

Hafsa described being forced by her parents, especially her mother, to provide food for her family by offering sexual favours to male fishermen.

“I usually go to Gasi beach every day,” the teenager said. “In a month, if I work well, I get 5,000 Kenyan shillings (equivalent to 50 dollars) and I don’t have a problem with that.”

Walking with Hafsa along the shore of the Indian Ocean, our conversation is interrupted by a green wooden fishing boat with fishermen from the deep sea approaching the shore, where women, men and children with baskets eagerly wait to buy fresh fish from the fishermen coming in from the night catch.

Most of Hafsa’s clients are fishermen from the neighbouring country of Tanzania, who travel to Gasi once a year during the northeast monsoon winds and stay there for three months, from December to March, to fish and sell their catch.

After the monsoon season is over, and the foreign fishermen go back home, her clients are mostly motorcyclists who carry passengers, locally known as bodaboda.

“When I want to go to any given place away from home, I just board a motorcycle. When I’m almost at my destination, the bodaboda rider agrees to have sex for money. He gives me 100 shillings, and I also do the same with different bodaboda men to return home.”

Iddi Abdulrahman Juma is vice chairman of the Gasi Beach Management Unit, and a beneficiary of training from a non-governmental organisation known as Strengthening Community Partnership and Empowerment (SCOPE) that works to end commercial sexual exploitation of children in Kwale County. Juma blamed parents and guardians for making children vulnerable by sending them to buy fish at the beach.

“We’ve been seeing like 10 children coming here to the beach to buy fish, which is also dangerous. Some of them are already pregnant and others infected with deadly diseases. The age group of children who indulge in commercial sexual exploitation is between 12 and 17 years old,” he said.

Twenty kilometers from Gasi, in the Karanja area of Kwale County, 14-year-old Asumpta Pendo* sweeps out a thatched mud shanty. She says it is a mangwe — a place where palm wine known as mnazi (a traditional liquor) is sold.

Just like Hafsa, Asumpta also indulges in sex for money with clients, often drunk, just to put food on her family’s table. She is also forced by her mother to sell mnazi.

“I dropped out in class seven because my mother was unable to educate me and we live in poverty. Life is hard,” she said. “Most of my clients are palm wine drinkers. In a day, I usually get one or two clients. Some of them prefer to use condoms, while others refuse. They usually give me money — between a dollar and 12 dollars a night.

“If I refuse to sell palm wine to male customers here at home, my mother beats me and goes to the extent of denying me food. As much as I don’t like what I do, I’m forced to do it because we need to survive,” Assumpta said.

A 2009 baseline survey conducted by the End Child Prostitution in Kenya network, an umbrella of various civil society organisations, found 10,000 to 15,000 girls living in the coastal areas to be involved in child sex tourism.

To address this problem, SCOPE has partnered with the organization Terre des Hommes (TDH) from the Netherlands to implement a programme aimed at ending the commercial sexual exploitation of children (CSEC) in Kwale County and three sub-counties, Matunga, Msambweni and Lunga Lunga.

The strategy includes creating awareness among the general community and calling on local citizen constituencies to raise their voices against these abuses.

The coordinator of SCOPE’s End Commercial Sex programme, Emanuel Kahaso, said that the problem is serious in Kwale County, popular with tourists for its clean, sandy beaches.

“In 2006, the United Nations International Children’s Emergency Fund (UNICEF) reported that there were more than 50,000 children in Kenya who have engaged in sexual exploitation and 30,000 who are selling their bodies along the beaches in coastal Kenya,” he said.

“As an organisation, we also found out that more than 15,000 children here in the Kenyan south coast are used for commercial sex work in tourism,” he said. “Because of traditions and taboos, parents do not talk openly with their children about reproductive health and some of the perpetrators who are found guilty of the vice are not arrested because of these taboos.”

Emerging hotspots such as drug dens, nightclubs and discotheques, as well as an increase in bodaboda transport, have lured many children into commercial sex. According to local sources, in many instances, early marriage and commercial sex work have been initiated by parents, as well as child sex tourism and prostitution along the beach areas.

The problem is further exacerbated by the cultures and traditions of the local tribes, which are gender-biased and support various forms of sexual exploitation of children. Illiteracy is high, the economy is poor and laws to protect children are rarely enforced.

At Msambweni Referral County Hospital, Saumu Ramwendo, a community health worker for SCOPE, empowers and counsels young girls on health matters and fighting commercial sexual exploitation. The group has so far been able to reach 360 children who are the victims of sexual exploitation and 500 others considered at risk.

*Names have been changed to protect their identities.