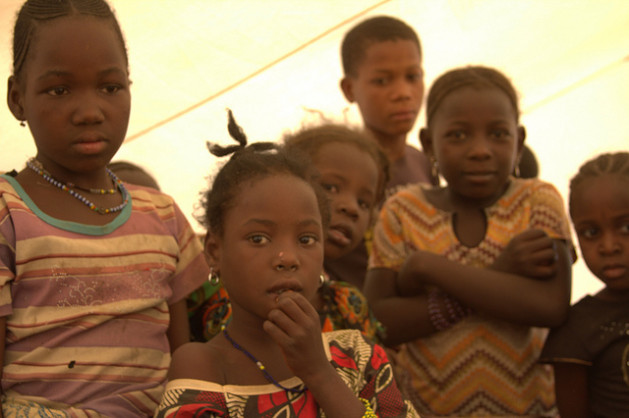 BAMAKO , Mar 22 2013 (IPS) - One of Amina Diallo’s sons, 14-year-old Salif, has been missing since August last year. She thinks Islamists kidnapped him while he was on his way to the market in their hometown of Gao, in northern Mali, and recruited him as a child soldier.

“Wherever he is, he must know that I still pray for him to come back alive and well,” she tells IPS.

While a French intervention allowed the Malian army to reclaim the north of the country in January – it had been held for more than a year by Islamist militants composed of Al-Qaeda in Islamic Maghreb, Ansar Dine and the Movement of Unity and Jihad in West Africa – this West African nation still remains in turmoil with hundreds of thousands of internally displaced people, missing and abducted children and food shortages.

Diallo and her four other children now live at a relative’s home in Bamako after they left Gao last October. But despite Diallo’s hopes that Salif might return, chances are unlikely.

She tried to search for her missing son, only to be told by local authorities that they were sorry for her loss, and that the Malian army was doing its best to find out where the children were taken.

“Unsupervised children are also vulnerable to sexual harassment and violence, including the potential to be recruited as child soldiers by armed groups. This continues to be a concern for World Vision.”

A Human Rights Watch (HRW) report published in February found that children as young as 11 were placed on the Islamist rebel frontline. Shocked residents told HRW researchers that they saw bodies of child soldiers lying in pools of blood after the fighting. The United Nations Children’s Fund reported at least 175 children were used as soldiers in the conflict last year.

Blank says that her organisation is working with volunteers to share valuable child-protection messages with local communities, which will hopefully empower parents to keep their children safe.

“Children and their families remain vulnerable. They have increasingly limited access to food, water, medicines, and safe shelter, and are prone to diseases,” Blank adds.

Not all children are reported to have taken part in active combat. Some were also used as porters, cooks and spies. Others were offered as sexual slaves to combatants.

Oumou Camara was forced to watch as heavily-armed gunmen, who conducted door-to-door operations in their area in Gao, snatched her 16-year-old daughter from her. They were looking for underage girls, widows and other unmarried women to “marry off” to the mujahidin (combatants of religion).

“They took my daughter away at gunpoint and threatened to shoot us if anyone in the house objected,” the mother of seven tells IPS. “I never saw her again.”

Camara has given up all hope of ever finding her daughter and has no faith in the authorities. “What can the authorities do if they couldn’t even fight their own war? I’m powerless and can only hope and pray.”

Getting comment from the Malian government is impossible. The state has barred independent reporters from entering the war zone, and threatened to detain and prosecute anyone who publishes “sensitive information” that could incite mutiny under the current state of emergency.

But as rights groups try to protect Mali’s vulnerable children, they are also concerned about the growing food crisis in the country.

Oxfam International says that food prices have rocketed, aggravated by a shortage of cereals on the market. Rice has gone up by more than 50 percent since October last year.

“Many traders in Gao region have moved and/or sold out their remaining stocks from Gao to villages and communes outside of the town,” Oxfam International campaign manager in Mali, Ilaria Allegrozzi, tells IPS.

Also, the population has very little cash available as banking systems were disrupted by the conflict.

“Most people in the Gao region don’t have any money left, are in debt, and have sold assets – exhausting their coping strategies,” she says.

Allegrozzi says Oxfam International aims to provide food aid to at least 70,000 people. And Blank says that as of December, World Vision reached nearly 130,000 people in Bamako, Segou and Sikasso, in southern Mali.

Against this backdrop, finding abducted or missing children will prove difficult, as the conflict here has displaced 260,665 people internally, according to the U.N. Office for Coordination of Humanitarian Affairs. In addition, there are some 170,313 registered refugees in neighbouring countries such as Niger, Mauritania and Burkina Faso.

Many are reluctant to return to their former homes because of the food shortages. Diallo is one of them.

“I’m not in a hurry to go back because even if the war is over, what will we eat? What will I sell and buy in the market? Gao is thirsty, hungry and angry.”