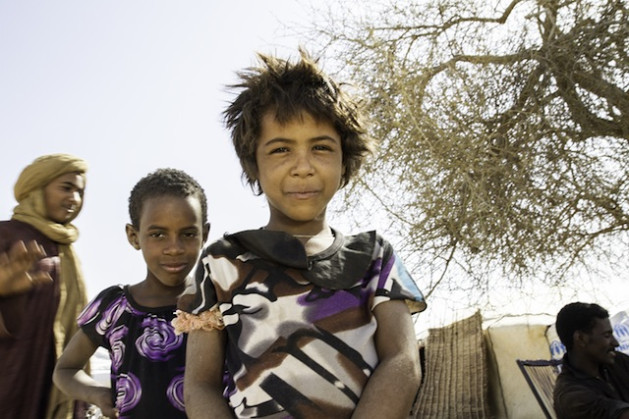 Two Tuareg girls are playing at Goudebo Refugee Camp in Burkina Faso. The crisis has forced 170,000 refugees, mostly Tuaregs and Arabs to flee north Mali in fear of retaliation from the Malian army. Credit: Marc-André Boisvert/IPS

OUAGADOUGOU, Burkina Faso, Mar 13 2013 (IPS) - As the Malian army and its foreign partners are slowly securing northern cities in the West African nation, it is still unclear how the country will turn its back on the political crisis that led to the March 2012 military coup.

“If the Malian government wants to re-establish itself over Mali, they need the National Movement for the Liberation of Azawad. We, Tuaregs, have been at war for 52 years. And we will continue until our people’s living conditions change,” Ibrahim ag Mohamed Assaleh, from the separatist organisation known by its French acronym MNLA, tells IPS in an exclusive interview in Burkina Faso’s capital, Ouagadougou.

In January 2012, the MNLA led an attack against a military base in Menaka, in Gao region, calling for an end to the marginalisation of northern Mali‘s nomad populations. Three months later they took control of the country’s north. Soon after, however, the MNLA was pushed aside by a coalition of Islamists militants composed of Al-Qaeda in Islamic Maghreb, Ansar Dine and the Movement of Unity and Jihad in West Africa.

“The (January) intervention of France and the international community is welcomed in the Azawad by the MNLA as long as they are fighting terrorists, who we have fought for many months,” says Assaleh, who is part of the team negotiating with the Malian government.

On Jan. 29, Mali’s interim President Dioncounda Traoré announced a roadmap for transition, setting elections for no later than the end of July. But the MNLA says it has not been consulted and included, and therefore will not participate.

“They might organise elections where they feel like it. But we do not see those elections happening, at least in our land. Our concerns have not been taken into consideration,” says Assaleh.

Mediation was initiated between the Malian government, the MNLA and the Islamist group Ansar Dine by neighbouring Burkina Faso’s President Blaise Compaore in August 2012, but the talks are now stalled.

“They still occur, but at a slower pace since the French intervention was launched,” explains a member of the Burkinabe mediation team who prefers to remain anonymous. Mali has been pressured by United Nations Resolution 2085 to negotiate with non-terrorist groups.

“Some lobbies in Bamako do not see the point of negotiating any more. That weakens peace. And this might be costly to the government,” comments Assaleh.

Yvan Guichaoua, a West African expert on non-government armed groups and a lecturer at the University of East Anglia, tells IPS that the responsibility of the present chaos is shared between those in the north and south of Mali.

“The problem is that Bamako authorities show no intention at all to negotiate with the MNLA at this stage. The MNLA is considered to have initiated the present chaos, which is only partly true – recurring rebellions have hit Mali since its independence.”

However, Dr. Roland Marchal, senior research fellow and specialist on the economics and politics of conflict in sub-Saharan Africa at the National Centre for Scientific Research, based at Sciences-Po in Paris, tells IPS that a political compromise between the government, the MNLA and Ansar Dine is not the way to secure northern Mali.

“First, all those actors may not be representative of the population enough to define and enforce an agreement. That is why a formula such as a National Conference that would encompass many actors rooted in the political, social, religious and cultural arenas, may offer a greater chance to reach a sustainable agreement,” he says, adding that all three groups also face allegations of huge violations of basic human rights.

“There is a need to fine tune between a new social contract that would include some kind of amnesty and the need for justice. This can be achieved by the Malians themselves, not the international community or the International Criminal Court (ICC).”

The Malian army has been accused of committing arbitrary killings against the Tuaregs – executions that have been documented by several human rights groups. The claims forced the Malian army chief of staff, General Ibrahima Dahirou Dembele, to call presumed military perpetrators back from the front.

Human Rights Watch accused the MNLA and its allies of committing executions, pillages and rapes during a 2012 attack on the Aguelhok military camp in northern Mali. The MNLA detained and executed up to 153 Malian soldiers, according the Malian government and the International Federation of Human Rights.

The allegations were serious enough for the ICC to launch an investigation. The Malian government has issued arrest warrants against 26 people, including Assaleh. Four members of the MNLA have been arrested in Mali, to date.

“The warrants are a non-event,” defends Assaleh. “Agelhok’s January 2012 massacres have not been perpetrated by the MNLA. We want an independent inquiry and we are ready to participate with the ICC.”

Beyond the roadmap, Assaleh remains sceptical of developments.

“We have signed many agreements in the past. Now we need to apply them. We need a definitive solution to the problems of the Azawad. Since the coup, nothing has changed. (Mali’s ousted President) Amadou Toumani Touré’s networks are still really powerful and want to retain control. The MNLA will not support that.”

But who does the MNLA represent?

“We have legitimate historical claims, even if we are a minority. This is our land. We invited all Tuaregs to join. But many do not want to talk to us. Among them are people who have supported all regimes, including the one of the dictator Moussa Traoré …they stayed in Bamako to keep their salaries, their privileges,” Assaleh says, referring to several Tuareg personalities who have joined the government and, he believes, made a lucrative business of the development of the north.

But Guichaoua says the MNLA remains heavily Tuareg “despite some roles offered to non-Tuaregs (Arabs, Songhay) in its official, yet phony, structure of command.”

“As a result, it arguably represents a small share of the population of the Azawad, mostly the Idnan and Chamanamas Tuareg tribes,” he says.

Marchal agrees, saying that the MNLA is poorly representative of the Azawad or Tuareg population in north Mali.

“The MNLA is seen as a group of thugs by many in Mali,” he says.

In Kidal, the MNLA’s stronghold in northern Mali, the French and Chadian army have ensured the securitisation of the area in cooperation with the MNLA, to the detriment of the Malian army. According to the MNLA, the Malian army is not able to protect northerners and Assaleh says the deployment of the army could only lead to more repression for Tuaregs.

But Guichaoua says that building a legitimate political representation from within the country will prevent the recurrence of another rebellion.

“(It) is the challenge ahead.”