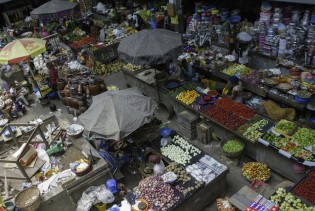 By Marc-Andre Boisvert
Fatimata Wallet Haibala sits among a group of women and teenage girls under a tent, her handicapped boy on her lap. The scene could be a rural picture of a Tuareg gathering in the desert. But the mother mother of five resides in a refugee camp in Goudebo, Burkina Faso, almost 100 kilometres from their home in Mali.

By Marc-Andre Boisvert
At the entrance to the Evangelical church in Mopti, central Mali, military soldiers stood on either side of the door as Pastor Luc Sagara greeted his parishioners for Sunday mass.
Next Page »
ADVERTISEMENT ADVERTISEMENT