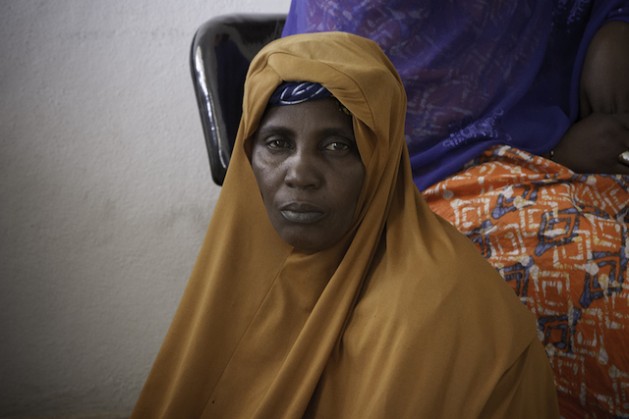 BAMAKO, Jan 31 2014 (IPS) - In her traditional orange headdress, Agaichetou Toure sits quietly in a waiting room in Kalaban-Koura, a popular neighbourhood on the outskirts of Mali’s capital Bamako.

It’s taken Toure almost two years to register as an internally displaced person (IDP) because until now she did not know that centres for this existed or that they provided aid for people like her. It was while running errands that she heard a crowd speaking about a new centre that had opened. So she came.

Many IDPs fear returning ... Protection for locals is minimal. Basically, for now, populations are left by themselves." -- Almahady Cisse from Cri de Coeur

Toure fled Gao, the capital of Mali’s south-eastern Gao Region, the day after Islamists entered and took control of the city in March 2012. Along with her three children, she boarded a canoe and crossed the Niger River as the sound of rifle fire rung out in the background.

Her two older children crossed into neighbouring Niger and took refuge with an aunt. Toure and her eight-year-old daughter boarded a bus and travelled for four days to reach Bamako, about 1,200 kilometres south of Gao, to take refuge with her brother.

Almost two years later, their living conditions remain difficult as they stay with Toure’s brother, his two wives and eight children in his two-bedroom home. The sleeping arrangements aren’t any better. Each night, depending on which wife her brother sleeps with, Toure has to sleep in a different bedroom.

“I am stuck in Bamako. I don’t like it. But I have to [stay],” says the 42-year-old who is one of eight women waiting to be registered at this IDP centre. Toure’s home city of Gao was targeted by rocket attacks last week.

It has been a year since this West African nation’s government took back control of its north, and six months after peaceful elections were held here.

In January 2012, a Tuareg rebellion triggered a series of events that lead to the fall of almost two-thirds of Mali’s territory. The Tuareg rebels were soon ousted by Islamist movements, several of which are linked to Al Qaeda. But military intervention from French, and later African, troops, liberated the north in January 2013 and led to elections here in July of that year.

But hundreds of thousands of displaced persons and refugees have still not returned to their homes.

The International Organisation for Migration (IOM) in Mali says that, as of January, there are 217,811 displaced persons, mostly in the southern part of the country and in Bamako. It is a reduction from the 353,455 IDPs recorded in June 2013. In addition, about 167,000 refugees remain in camps in neighbouring countries.

In a spartan, but brand new office in Kalaban-Koura, Mahamane Allassa Assofaré sees about 20 IDPs a day who wish to be registered. This office is one of the five centres run by the Agency for Technical Cooperation and Development (ACTED) in collaboration with the IOM.

Assofaré documents the story of each IDP who comes through the doors. It’s the first step in helping them receive aid, basic services, professional training, cash transfers and maternal care.

“They face a lot of problems. The cost of living is much more expensive in Bamako than where they are from. There are issues with health, food, housing,” Assofaré tells IPS while handing a questionnaire to an IDP.

IOM estimates that around 57 percent of the 353,455 IDPs registered in June 2013 have now returned to their homes, 78 percent of whom say that the improved security situation motivated their return.

Niamoye Alidji is an IDP whom IPS met two years ago. She was one of the first people to return to her home in Timbuktu, a town on the list of the United Nations Educational, Scientific and Cultural Organisation’s (UNESCO) world heritage sites, in northern Mali. And she is happy that she did.

“People are slowly coming back. Shops are reopening. School is starting. In Timbuktu, things are getting much better. We are safe,” she tells IPS over the phone.

There’s Nothing To Go Back To

If Timbuktu has been pacified, several regions are far from secure. The city of Gao was targeted by rocket attacks last week. This week, it was the turn of Kidal, a city in northern Mali. In those areas, the security situation still remains fragile.

“Our position is that we do not encourage massive returns,” Olivier Beer, from the U.N. Refugee Agency (UNHCR), tells IPS. “Safety does not explain it all.”

He says that the humanitarian conditions of the refugees and the absence of state facilities are reasons not to support mass repatriation.

Almahady Cisse from Cri de Coeur, a Malian collective that was created to support the victims of the humanitarian crisis in the north, agrees.

“There is a lack of accompaniment measures. Many IDPs fear returning, especially civil servants, which delays state support. Few schools have reopened. There are still limited health facilities. Protection for locals is minimal. Basically, for now, populations are left by themselves,” Cisse tells IPS.

Abdoulaye Haidara, 50, from a village close to Bourem, a town in Goa Region, has been living in Bamako for almost two years. He is reluctant to return home.

“I talk to my family in Bourem. It seems better. I would like to go back, but there is nothing left there. Everything I had has disappeared. And I have no way of feeding my four kids there. It serves no purpose to go back,” he tells IPS.

Assofané says that because of the lack of services and facilities in the north, many IDPs who went home after the violence, are returning to Bamako.

“They lost everything in the pillage, and the economy is quite bad,” explains Assofané.

And there remains a stream of newly displaced IDPs moving to Mali’s south.

The IDP situation here is fragile.

“We have done an in-depth investigation and the IDP situation has lead to a slow precariousness of host families,” Nicolas Robe, country director for ACTED, tells IPS.

Several IDPs have moved in with their extended families, burdening many of these households. The situation is becoming unbearable for some and several households have reached out for aid.

The IOM estimates that many IDPs will need food assistance to return home. About 800,000 people need immediate food assistance and about three million of the country’s 14.8 million people are at risk of lacking food in the next three months.

It is no wonder that Cisse from Cri de Coeur believes it is a good thing that IDPs are not forced to return home.

“A return should not be premature. Someone that has lost everything needs support. They need time to organise for the best return possible. And so far, we are still in this process.”