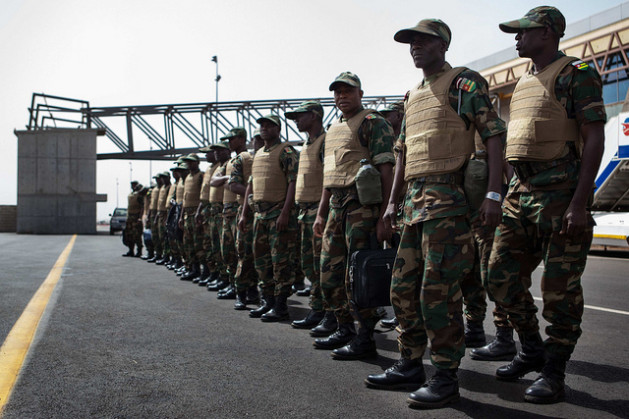 WASHINGTON, Apr 12 2013 (IPS) - With France withdrawing troops after chasing Al-Qaeda in the Islamic Maghreb (AQIM) from towns in northern Mali, the central government in Bamako should urgently launch a serious process of national reconciliation, particularly with the Tuareg and Arab minorities, according to a new report by the International Crisis Group (ICG) released Thursday.

Among other steps, the authorities should prevent the persecution by the security forces of the civilian population, especially in communities allegedly associated with rebel or armed Islamist groups that controlled the north for the 10 months preceding the French intervention in January.

Bamako’s leaders also should not impose pre-conditions, such as immediate disarmament, that make dialogue with the National Movement for the Liberation of Azawad (MNLA), the Tuareg independence group, more difficult, according to the ICG.

They should also ensure that the country’s radio and television stations do not incite or aggravate existing ethnic divisions in the country, especially in the run-up to national elections that are supposed to take place in July, according to the 47-page report.

“Elections must be held soon but not at any cost,” according to Gilles Yabi, ICG’s West Africa Project director.

“The radicalisation of public opinion is a major risk, and Mali’s leaders and institutions must take firm action to prevent people, especially those in the south, (from) lumping together rebels, terrorists and drug traffickers with all Tuaregs and Arabs,” he said.

As if to underline the urgency of the challenge, the ICG report, ‘Mali: Security, Dialogue and Meaningful Reform’, was released just as Human Rights Watch (HRW) announced that two Tuareg men who had been detained by Malian soldiers in a small town near Timbuktu had died while in detention at Bamako’s Central Prison.

The two were part of a group of seven men, aged between 21 and 66, who were arrested in mid-February on suspicion of supporting Islamist groups, including AQIM. The men were subsequently transported to the Bamako prison, according to HRW which interviewed the men there Mar. 20.

HRW said the two men probably died of excessive heat, given the lack of ventilation in the room in which they were held, possibly combined with the injuries they received from the earlier abuse, which included repeated beatings and burning. The surviving five were reportedly moved to a different room after the two deaths, HRW reported.

The deaths came amidst continuing reports of abuses against Tuaregs, Arabs, and Fulanis by Malian soldiers who returned to the north alongside French forces in their drive to oust AQIM and its allies. Since then, HRW’s Sahel expert Corinne Dufka told IPS, at least 13 members of the three minority communities have been summarily executed by Malian security forces and at least another 15 have “disappeared”.

“These abuses by the army in reconquering the north are exacerbating already existing ethnic tensions,” she said.

The chaos into which Mali descended began at the beginning of 2012 when MNLA, whose forces were fortified by returning and well-armed veterans of Libyan leader Moammar Gaddafi’s security forces, chased the Malian army out of the north, precipitating a military coup that ousted the democratically elected government in Bamako.

AQIM, initially a mainly Algerian movement that had dug deep roots into northern Mali after its defeat in Algeria’s civil war, was able to wrest control of most of the region from the MNLA by last June.

As its control spread over the succeeding months, Mali’s neighbours and Western countries, including the U.S., which had provided hundreds of millions of dollars in aid and training to Mali’s military as part of its Trans-Sahara Counter-Terrorism Partnership Initiative during the previous decade, became increasingly alarmed.

By December, the U.N. Security Council approved a plan for the eventual deployment of a West African force to take back the region. In January, however, one of AQIM’s affiliates launched an offensive southwards, triggering the France’s intervention.

French troops quickly took the region’s three most important towns – Gao, Timbuktu, and Kidal – paving the way for both the return of the Chadian army and contingents of the West African peacekeeping force (AFISMA).

French and Chadian forces, backed by U.S. intelligence assets, notably reconnaissance drones newly based in neighbouring Niger, then entered the northern-most part of Mali to pursue AQIM militants into their sanctuaries as part of the ongoing “war against terrorism”.

Militants have since staged a number of suicide attacks against
targets in the cities. According to the ICG report, the ability of AFISMA, which is likely to absorb the remaining French troops as part of a rehatted U.N. stabilisation mission, to maintain security for the civilian population is “unclear”, while a senior Pentagon officials testified here earlier this week that it was a “completely incapable force”.

Paris announced this week that about 100 of its 4,000-troop intervention force have pulled out – the start of a phased withdrawal that will leave about 1,000 French soldiers as part of the proposed stabilisation mission by the end of the year.

At the same time, a 550-man European Union (EU) mission began training Malian soldiers last week in hopes that they will eventually play a major role in defending the country against the AQIM threat. The mission is also aimed at reforming the military institution, including fighting endemic corruption and subordinating itself to civilian control.

Meanwhile, some Republican lawmakers here, notably Sen. John McCain, who just returned from a trip to Mali, are pressing the administration of President Barack Obama to restore and expand military aid to the Malian army. Direct U.S. military assistance to the army was cut off after the coup, and the administration appears more inclined to defer to the EU at this point.

The ICG report stressed that political initiatives are at least as important as military measures.

“Focusing on terrorism alone risks distracting from the main problems,” according to Comfort Ero, ICG’s Africa director. “Corruption and poor governance are more important causes of the crisis than the terrorist threat, the Tuareg issue, or even the north-south divide.”

“The challenges for the region and the U.N. are to align their positions on the political process and to insist that Malians, especially their elites assume responsibility for reversing bad governance and preventing another crisis,” she said.

“Addressing the Tuareg problem is key to the future of stability in Mali,” she noted, adding that top priority should be given to returning the tens of thousands of Malians now living in refugee camps to their homes.