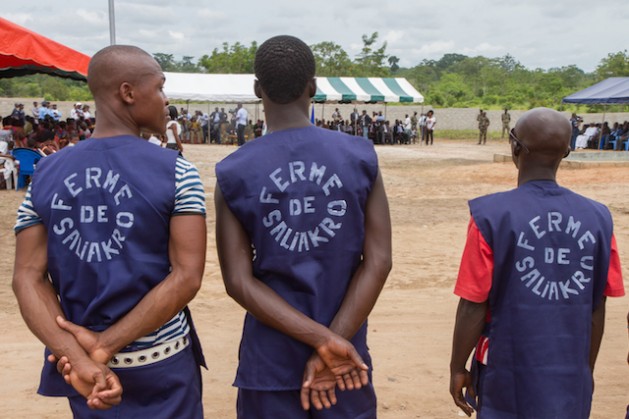 Prisoners at Saliakro Prison Farm in Côte d’Ivoire. Prisoners, who were selected on account that they are non-violent and condemned for short and medium term sentences, have a relative freedom to move within the gated farm. Credit: Marc-André Boisvert/IPS

SALIAKRO/ABDIJAN, Côte d’Ivoire, Aug 1 2014 (IPS) - François Kouamé, prisoner Number 67, proudly shows off a sow and her four piglets. Dressed in his rubber boots, he passes by two new tractors as he happily makes his way to a field where pretty soon cassava and corn plants will start growing. “Look at those sprouts. It is a lot of work!”

Being imprisoned in one of the world’s most impoverished country’s is far from an easy ride. But Ivorian authorities are searching for alternatives to the overcrowded prisons and malnourished prisoners here. And they just may have found the answer — in a farm.

The Saliakro Prison Farm, where Kouamé is currently serving out the remainder of his one-year prison sentence, is the first of its kind in Côte d’Ivoire. He was one of the first detainees to be sent here in December 2013.

The 21 buildings on the farm, built on a former summer camp, are to provide accommodation for 150 prisoners who have been sentenced for less than three years for non-violent crimes. Here they will learn new skills in farming.

“Our objective is truly to make prison time an opportunity for a sustainable change in life.” -- Bernard Aurenche, country representative of Prisoners Without Borders

For Kouamé, being on a farm is a relief compared to the six months he spent in Soubré State Prison for cutting trees in a neighbouring cocoa plantation.

“We were sleeping four persons in a space that could contain only one person. And we were granted only a bowl of rice per day,” says the young man.

Now he eats three meals a day, and stays in a clean room with 16 other prisoners. Each man has his own bunk bed, a closet and plenty of space to move about in.

Mamadou Doumbia, 32, is serving a two-year sentence for stealing computers. The quiet and articulate man is relieved to be on the farm. He spent 11 months in Agboville prison, in Agnéby Region close to Abidjan, the country’s economic capital.

He reveals a dark portrait of life in Agboville prison. Rape, malnutrition and pests are some of the many things he says he witnessed.

“I feel like being human again,” he tells IPS.

Though life on the farm is no vacation. Inmates must wake up at 5:30 am and be ready for work no later than 7am. They work till 3pm, only taking a short break for lunch. Evenings are their own to do with as they will, but they have to be in their dormitories by 9pm.

Côte d’Ivoire has relatively modern prison facilities compared to the rest of West Africa, where most countries have not invested in new prisons since the 1970s. In neighbouring Ghana, the Jamestown Colonial fort only ceased to be used as a penitential facility in 2008.

In Guinea-Bissau, the country had to wait for the United Nations to build a prison in order to stop cramming prisoners into what is now a beautiful colonial house, renamed Casa dos Direitos or the House of Human rights. Mali, Guinea, Sierra Leone and Liberia all have overcrowded prisons dating back to the 1960s.

Still, Ivorian prisons were planned for another era. In the Abidjan Detention and Correction Centre, known by its French acronym MACA, overpopulation is an understatement. The building, conceived in the 1980s for 1,500 prisoners now has a population of over 5,000.

“Hygiene is very difficult. There are frequent water disruptions,” Jean a prisoner at MACA, who prefers to remain anonymous as prisoners are not allowed to speak to journalists, tells IPS over the phone.

And now, even if the government and international donors start to reopen detention centres in the north, closed by a decade of de facto separation with the south, congestion in state prisons remain dire.

The prison in Man, a town in west Côte d’Ivoire, holds several perpetrators of the 2010-2011 post-electoral crisis that resulted in over 3,000 deaths.

While it has been renovated in the last year, newer does not mean less crowded. It was built to hold only 300 inmates but it currently holds twice as many. Didier, who is awaiting trial in Man Prison, says the basic meals of rice have left him hungry. “We don’t [get to] eat three meals. Most of the time we eat only once,” he tells IPS over the phone.

In May, five prisoners from Man died and several others were hospitalised. Dr. Viviane Lawson Kiniffo, the prison’s doctor, told Ivorian media that promiscuity, malnutrition and hygiene were big issues.

Coulibaly has several reasons to be satisfied. Aside from improving inmate’s living conditions, once fully functional, Saliakro Prison Farm will relieve prison budgets by several hundred dollars as, besides feeding its own prisoners, it will produce enough to make a profit from selling produce on local markets.

But the 450 hectares of are not only there to deliver a relief to state budget.

“It is more than about feeding themselves. It is also about getting those prisoners back to a normal life. It is about learning new skills and being able to reintegrate and participate fully in society,” Saliakro’s superintendent, Pinguissie Ouattara, tells IPS. “This is about bringing an alternative to crime, and decreasing the crime rate.”

Saliakro is not on any map: this town does not exist. But it is the contraction of Kro, which means “village” in the local Baoule language and “Salia”, the first name of former superintendent Salia Ouattara who died in 2007.

“Our objective is truly to make prison time an opportunity for a sustainable change in life,” Bernard Aurenche, country representative of Prisoners Without Borders, a French NGO, tells IPS.

He explains that the 150 prisoners are backed by trained agronomists. Participants in the project will deepen their agricultural knowledge and will be paid 300 CFA (about 70 cents) per day for work.

“This will allow them to collect money to grow their own crops once they leave. It is also about reinsertion into real life. And getting confidence.” 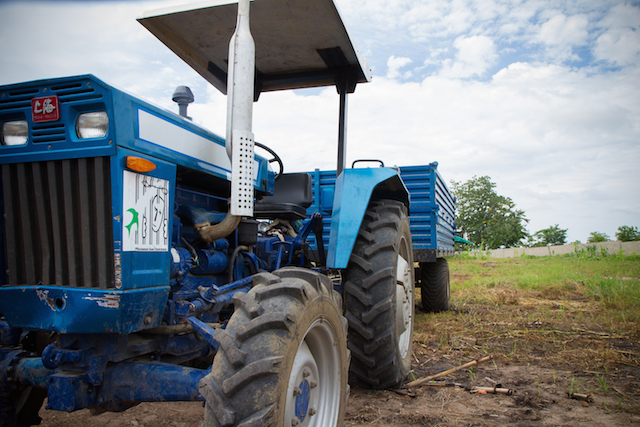 One of the tractors that Prisoners Without Borders has bought for the Saliakro Farm project in Côte d’Ivoire. Learning to use modern machinery was an important step in the programme. Credit: Marc-André Boisvert/IPS

Kouamé is more realistic. He was a farmer before, but tells IPS that he has learned much from the agronomists here. “I have learnt here many things that will make my farm more profitable, notably by diversifying production.”

But the road is still bumpy. Funding, which has been provided by the European Union, now needs to be secured for a longer term. And still, a better selection process of prisoners needs to be found as, so far, selection of participants was not based on any clear criteria.

But prison superintendent Ouattara, who also manages the Dimbokro Prison a few kilometres from Saliakro, is positive.

“It is the beginning. We will need to adjust. But we strongly believe that there will be a positive outcome for those men. Much more than leaving them by themselves doing nothing.”