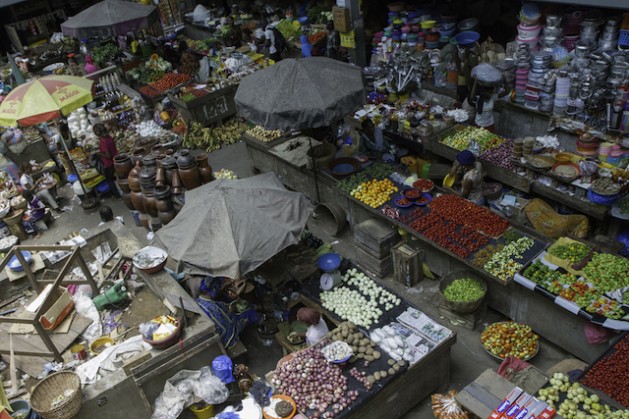 ABDIJAN, Côte d’Ivoire, Sep 26 2014 (IPS) - In the middle of downtown Abidjan, Côte d’Ivoire, the aisles of a thriving supermarket are full of customers. But as they line up to pay for their items, there is one line to a cashier’s till that remains empty. It’s the “green cash register”, where the cashier does not provide plastic bags as this supermarket tries to implement a green policy.

“People do not find it convenient to bring their own bags. But they are often angry that they have to line up while nobody comes here [to the green cash register],” the cashier tells IPS.

Increasing environmental consciousness is not the sole reason for Ivorian shops adopting green policies: the government has adopted new laws that will affect consumers.

Each year, Côte d’Ivoire produces 200,000 tonnes of plastic bags of which 40,000 go directly into the trash. Less than 20 percent of this plastic is recycled.

In this West African nation, the pressure is growing to find alternatives to plastic shopping bags — which have become an environmental curse. In several of the city’s neighbourhoods, used plastic bags clog gutters and float on the lagoon, causing floods, sanitation problems and health hazards.

Côte d’Ivoire has been choking on its plastic bags. But as the government tries to find solutions, consumers still need to adapt their habits to the changing regulations.

In May 2013, the Ivorian government announced a ban on several types of plastic bags. It was meant to prohibit the production, importation, commercialisation, possession and the use of any non-biodegradable plastic bags made of lightweight polyethylene, or similar plastic derivates with a thickness of less than 50 microns.

Already, eight African countries are doing the same. It is an initiative that started in Rwanda and South Africa in 2004, with the two nations deciding to levy extra taxes on plastic bags. Other countries that have banned plastic bags are Botswana, Eritrea, Kenya, Mauritania, Tanzania and Uganda.

But pressure from the plastic industry forced Côte d’Ivoire to back down and to postpone the ban until this August, while trying to find solutions to the industry’s concerns. The government could not simply ignore 7,500 jobs and an industry worth about 50 billion CFA (97 million dollars).

The ban was only applied in August, which allowed the industry enough time to produce biodegradable bags and develop alternatives.

The government also tried to ensure that the market was ready for the transition.

The industry has also had more time to invest in producing bio-degradable bags and more effective recycling infrastructure.

“Our objective is to, on a long-term basis, reduce and replace all bags with reusable bags, and to orient consumers about other ways of carrying merchandise, like [using] cloth bags and baskets.

“If the industry picks up, it will generate long term-profits of annually 17.1 billions CFA [33 million dollars] and will create 1,900 jobs,” explained Ivorian Prime Minister Daniel Kablan Duncan at the beginning of September.

In Treichville Market, one of the busiest commercial areas of the economic capital of Côte d’Ivoire, the sellers have other concerns.

“People do not have the money to buy an entire bottle of oil. So we divide small portions into plastic bags [to sell],” Mohammed Cissé, a small shop owner in one of Abidjan’s biggest markets, tells IPS.

“It is an economical problem, I think. People do not have the money to buy containers. Those plastic bags are cheap. Reusable boxes are expensive.”

For Cissé, having consumers reuse their plastic bags will mean he will save money since he currently covers the cost of the plastic bags he packages his oil in.

“But people will not understand this! I cover most of the cost of the plastic bags, which is about 10 CFA per bag [3 cents]. Since I give away hundreds of bags per day, I see the total cost,” he says.

In a country where almost half the population lives on less than two dollars per day, buying reusable bags is a challenge, says Cissé.

His neighbour, Jean-Marie Kouadio, is wary about the new bags.

“I have seen biodegradable bags. They are very weak. Where is the benefit if you have to use three bags instead of one?”

He tells IPS that ecological solutions are not available for the smaller bags that he uses to package oil and salt.

Further away, Awa Diabaté faces a different concern. Diabaté, 54, sells donuts on a street corner, right beside a heap of abandoned dirty plastic bags. She sees the point of the ban, but believes that the health concerns behind the ban will be a challenge if proper solutions are not found.

“The individual wrappings allows me to keep the donuts clean from dirt. Often, small kids come to buy food. If they do not carry the food in [the plastic], they will drop it on the ground.

“Reusing bags, means cleaning them. Many people will not take good care. I am pretty sure some will get sick from that,” she tells IPS.

Diabaté’s concerns are down to earth. But they reveal a reality difficult to ignore: plastic bags are essential to Ivorian daily life. And solutions need to fit that.