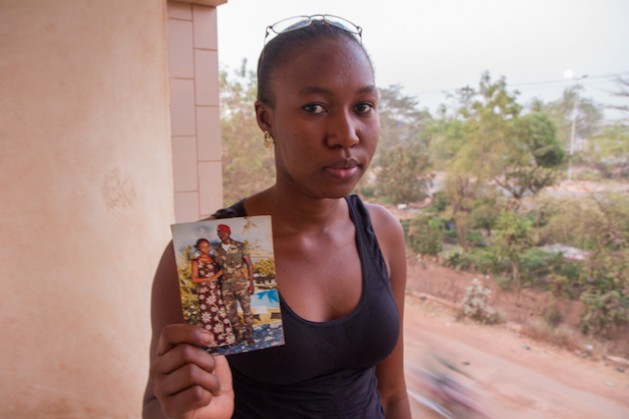 Aminata Diarra holds up a picture of her brother Malamine, a Red Beret who disappeared in early May 2012. Credit: Marc-André Boisvert/IPS

It was in May 2012, not long after after General Amadou Haya Sanogo, then a Captain, had seized control of the country’s capital Bamako. The military, which suffered several humiliating defeats against Tuareg rebels in the country’s north, initiated the mutiny against the government in their bid for more resources to fight the uprising in northern Mali.

"We know our relatives have been tortured and killed. We found each other in pain. We will fight for justice." -- Bintou Maiga Sagara, mother of missing Red Beret, Dokale

It was only five days after the coup that Malians learned the name of the junta leader. Sanogo gained instant popularity among a population that saw the democratically-elected government as corrupt. Small Chinese motorcycles, a very popular means of transportation in Bamako, were decorated with stickers of the new leader.

“He offered us hope. But now we know that he was there to enrich himself,” Oumar Sanogo tells IPS while drinking tea with friends at the corner of a street, in the shade of a newspaper stand.

For a few weeks, Sanogo was head of state until international pressure forced him to step down. Constitutional order and a transitional government, headed by the president of the National Assembly, Dioncounda Traore, were then established.

But this was not before hostilities between the Red Berets and Sanogo’s Green Berets resulted in the exchange of fire in April 2012 in what has been dubbed a “counter-coup”.

Stories about who started the hostilities remain unclear, but several Red Berets were killed and arrested. Diarra’s brother was one of 21 Red Berets who disappeared after the counter-coup failed.

The last time the families of these 21 Red Berets saw them alive was on national television, soon after their arrest at Sanogo’s headquarters, the Kati military base just outside Bamako.

“I went on May 2nd [2012] to Kati to see if my brother was alive. I went back every day. I received threats. I kept going. But we never had news,” Diarra tells IPS.

She explains that, while some succeeded in finding their missing family members after the “counter-coup”, all communication about the soldiers stopped around April that year.

While this West African nation is slowly moving on from the 2012 military coup, and the occupation of its north by Islamic extremists – the country held elections here in July 2013 – families of the military victims are stilling awaiting justice for what is considered to be the other Malian crisis.

Sanogo was arrested and charged for murder and kidnapping in November 2013. And soon after his arrest a mass grave containing 21 bodies was discovered a few kilometres from his Kati military base. Many believe that these are the bodies of the 21 missing Red Berets.

It is hoped that any day now the DNA results of the soldiers will be made public.

“We are patiently waiting for results. Then, justice will be able to act,” says Diarra, who is also a jurist.

Bintou Maiga Sagara is also watching the situation closely. Her son, Dokale, was among the ones that disappeared.

“I am relieved that they discovered the [bodies],” she tells IPS, showing a picture of her son in uniform.

Sagara has faith that justice will be done.

“Mali is not a violent country. We know our relatives have been tortured and killed. We found each other in pain. We will fight for justice,” she says.

While human rights violations and violence committed by the army have yet to be investigated in the north, the think tank International Crisis Group said in a January  report that there is a need for reform in the military as well as “guaranteeing the republican character of an army that will not engage itself into politics.”

But Moctar Mariko, president of the Malian Association of Human Rights, believes it is important to first shed light on the several episodes of violence before moving forward.

“Mali has a long tradition of impunity, especially within the army. It is time to move away from that,” Mariko tells IPS.

But Sanogo and his followers are not just accused of killing Red Berets. In September 2012, a mutiny was quenched when several of Sanogo’s former supporters revolted against him.

Thirty Green Berets were arrested and then released, but at least eight men have disappeared.

Three bodies were found a month later in October 2012. But the five other men are still missing and their families are still waiting for answers to see if their brothers, sons and husbands are alive.

Nantoume Fatoumata Doumbia’s brother, Lassine Keita, disappeared while drinking in a bar in Kati in September 2012. His body was found a few days later.

“I knew what happened. The day after the mutiny, Sanogo said that he will kill all the ones that rose up [against him],” she tells IPS calmly.

Fanta Keita still does not know what happened to her husband, Ibrahim Doumbia.