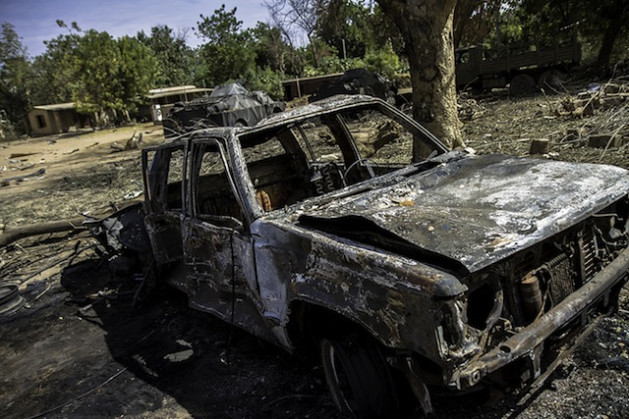 MANGAIZE, Niger , Mar 5 2013 (IPS) - Malian refugees in Mangaïze, northwest Niger, are keen to return home to start work and be able to support themselves once more.

“We do have food and water, even if the food is not varied. Our primary schoolchildren are back in class,” Aissa Hama, a 39-year-old mother of five, told IPS. “But it’s hard to be in exile, dependent on the help of others.”

She is one of thousands of Malians who spilled across the border into neighbouring countries in the months prior to and after the occupation of the country’s north by armed Islamist groups allied with Al-Qaeda back in April 2012. The Islamists held onto the country’s north until February, when a French intervention allowed the Malian army to reclaim the territory.

The Mangaïze camp was officially created in May 2012, following an influx of a large number of Malian families fleeing to Niger, said Idrissa Abou, a member of Niger’s National Commission for Refugees.

In addition to a monthly food ration, refugees have access to drinking water from three small boreholes, and primary health care. There are sanitation facilities with 250 showers and toilets respectively, and a household waste management system.

Refugees also have access to administrative services, a school and, with the opening of a police station, a security service.

“At the moment, there are 1,522 families, which amounts to a population of 6,037 mainly made up of Malian refugees, but there are also Nigerien returnees,” Abou told IPS, adding that an overwhelming majority of the refugees are from Ménaka, the closest Malian town to the Ouallam municipality in southwestern Niger.

He added that the numbers in the camp had increased in February after some 1,700 refugees from the nearby Bani Bangou camp were transferred to Mangaïze.

The transfer meant that Mangaïze camp had to be extended by 11 additional hectares from its original 52, according to Ibrahim Kebé, the local coordinator for Islamic Relief Worldwide and director of the camp.

“But with the continued support of the Niger government and the cooperation of other humanitarian agencies, we will be able to overcome the challenges,” he told IPS.

Access to enough food has been one of those challenges.

According to the latest statistics of the United Nations Refugee Agency (UNHCR) in Niamey, the Niger capital, each refugee in Mangaïze receives on average of 1,849 kilocalories (kcal) per day, against the standard 2,100 kcal, and 10.8 litres of water, compared to the recommended 20.

For some, the rations have not been enough.

Aissata Yindou, a 36-year-old mother of four who has been living in the Mangaïze refugee camp since March 2012, told IPS that the food rations needed to be increased.

“We only get a 50-kg bag of rice for the family, and a 0.75-kg can of cooking oil per person. We don’t receive any spices to eat with this food. They have to increase the food ration,” she said.

She added that access to medication was also limited.

“This eye infection is so painful sometimes I can’t sleep. I can’t get it treated because the camp doesn’t have the medication and I don’t have the money to buy it,” said a distressed Yindou.

Hadiza Issaka Abdou, a nurse at the camp’s health centre, told IPS that they were doing their best to treat patients with what medication was available.

“We get many complaints, but we are doing the best we can in terms of on-site medical treatment. We don’t have medicines for every illness. The main diseases here are malaria, diarrhoea and skin diseases,” she said.

But Akiline Agbogoli, the vice president of the Malian Refugee Community at the camp, told IPS that they were being well treated.

“Being away from home, we can’t have everything we need, but in terms of food and basics, we have been well treated,” Agbogoli said.

However, for many here, it is not enough. Saddam Moussa worked as a butcher in Ménaka, in Gao Region, until the Azawad National Liberation Movement, the Malian Tuareg rebel group, captured the town.

“I am tired of doing nothing, waiting for others to take care of me. I want to work and live off the fruits of my labour,” he told IPS.

Mohammed Lamine Aghabass, an office worker at the Ménaka customs office, also wants to return home. “We welcome the military support from Mali’s allies to free our hometowns from the thugs who chased us away. We are in a hurry to get back to our normal lives, but we can’t go back without a go-ahead from the Niger government and the agencies that are helping us,” he told IPS.