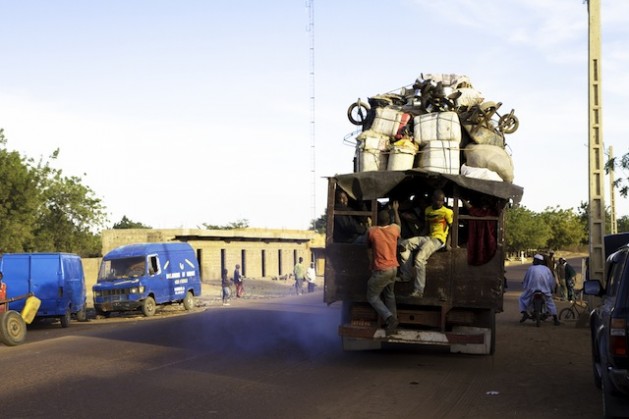 NIAMEY, Feb 23 2013 (IPS) - When northern Malian refugees fled their country for Niger in 2012, they expected they would be able to return home shortly afterwards. But despite the armed intervention by the French army in the West African nation, few of the 50,000 Niger-based refugees are ready to leave for home just yet.

“Have you watched the news? Do you honestly think we can go home under these conditions?” asked Omar*, the vice-president of the Association for Malian Refugee Families in Niamey, the Nigerien capital.

Omar and thousands of others spilled across the border into neighboring countries in the months following the occupation of the country’s north by armed Islamist groups allied with Al-Qaeda back in April 2012.

Comprising a mix of Al-Qaeda in Islamic Maghreb (AQIM), the Movement for Unity and Jihad in West Africa (MUJWA), and Ansar Dine, the rebels were able to hold on the territory until a French intervention allowed the Malian army to reclaim the north last month.

Omar’s hometown, Gao, however, continues to be a scene of heavy fighting and suicide bombings ever since French and Malian troops took back the town last month.

Safety is not the only issue that’s keeping Omar from returning. “I am a civil servant in Gao and have no job to return to until the public service is back on its feet,” he said.

Seydou*, a physical science teacher who fled Ansongo in eastern Mali in May last year, does not think it foolhardy to return home.

“All of us are thinking about going back,” he told IPS in the Nouveau Marché suburb of Niamey. “To be honest, I am longing to see Gao again. In fact, it’s an obsession. What’s more, my close relatives call me each week to encourage me to come home.”

But like Omar, he is concerned about how he will earn a living.

“I can’t go back to my teaching job if the schools have not reopened. In any event, there has been no bus service from Niamey to Mali since the French army began its military campaign in January.”

But Moussa*, the owner of a clothing store in the centre of Gao, has no such concerns and plans to make his way back home soon. “I am getting ready to leave. I have already started sending merchandise ahead to Gao.”

He is undeterred by the threat of the mines along the road to Gao or attacks by gangs of robbers.

“Things will calm down,” he said, citing reports of the army making house-to-house searches for members of MUJWA (the Movement for Unity and Jihad in West Africa), one of the militant groups.

“The militants would rather hand themselves in than risk the safety of the families who have sheltered them,” he believed.

Aminata*, the president of the Association of Refugee Families, lives in a home sheltering six Malian families. But she does not plan to return home while MUJWA is still in Gao.

“The Islamists want women to be like furniture in the house, to stop us from going outside without a veil, from living. So we left.”

Many “light skinned” refugees, in particular, worry that they will be the target of reprisals, she said, if they are identified with Ansar Dine Islamists or Members of the National Movement for the Liberation of Azawad (MNLA), a Tuareg group that led a rebellion in the north shortly before the Islamists moved in early last year.

Pastoralists caught in the crossfire

But Mali’s rural pastoralists will be most at risk when they return home, according to Dodo Boureïma, the general secretary of the Association for the Development of Livestock Breeders.

“In northern Mali, pastoralists are caught between a rock and a hard place. On the one hand, armed robbers prey on them. On the other, the army accuses them of being a cover for the rebels to cross the border,” Boureïma told IPS.

“I even heard recently that a herder was shot by soldiers and his herd was set loose.”

Unlike urban refugees, the pastoralists might be forced to leave Niger at the start of the rainy season, he said. The organisation now has to plan how pastoralist will return to Bankilaré, in the northeast of Tillabéri on the Malian border.

“When the rains come in May or June, Nigerien farmers are likely to want them to leave, because the livestock might damage their crops and compromise their food security.”

“The pastoralists know they must be ready to move back anytime, but for now, both the Nigerien authorities and citizens understand the difficulties facing the people of northern Mali,” Boureïma continued.

*The names of Malian refugees have been changed at their request for their safety.