In Mali, Driving Out Rebels but Not Fear 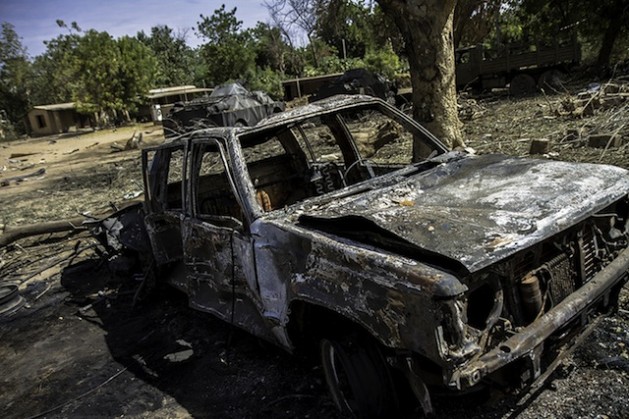 DIABALY, Mali , Feb 2 2013 (IPS) - “We know they are close. We do not feel safe,” mutters Allassane Traoré, as he stares down the road on which the Islamists entered the town of Diabaly in central Mali, almost two weeks ago.

Traoré himself a muslim and a muezzin — the person who leads and recites the call to prayer at the local mosque – became nervous when he saw a line of pick-up trucks filled with Al-Qaeda-affiliated jihadists driving around town on Jan. 14, some 250 kilometres from the country’s capital Bamako. He sent his kids and wife away.

“They were violent and they destroyed everything – they can come back at any time,” he tells IPS, speaking in front of his modest blue mosque. “We have seen them snorting white powder. They are not good Muslims.”

For the past year, almost two-thirds of this West African nation was occupied by a coalition of armed groups composed of Al-Qaeda in Islamic Maghreb (AQIM), the Movement for Unity and Jihad in West Africa, and Ansar Dine, an Islamist group among the Tuareg – a traditionally nomadic Berber people that live across large parts of Mali and Niger.

The Islamists, who say they are committed to the imposition of Sharia law, gained control of Diabaly for over a week until Malian and French forces successfully repelled them on Jan. 21. The attack against Diabaly triggered the ongoing French-led international intervention – on request by Mali’s interim president Dioncounda Traore – that eventually pushed the Islamist fighters out of three key cities in the north.

A couple of burned cars and abandoned Malian tanks now remind visitors that violent fights occurred in the small community surrounded by rice paddies. French flags have since been flying on shops and motorcycles around town, put up by locals convinced that France’s 2,500-troop-strong intervention saved them from Islamist rule.

The terrorists, while unable to read or write, “were better trained and equipped than the Malian army,” Diakaridia Doumbia, a retired military solider who is now a city councilor, tells IPS.

“They said they were against the government, not against the population. We did not believe that,” Oumar Diakité, the mayor of Diabaly, tells IPS. “We heard about Sharia in the north, the amputation and the flogging — many fled knowing what would happen next, even if terrorists tried to deceive locals by being nice.”

French special forces have left for the north and life seems to be back to normal in Diabaly. In the surrounding area, a small garrison of Malian troops has settled down, waiting for reinforcement from the 4,500 African troops that are expected to be deployed around Mali in the next weeks.

But further up the road towards the north, inhabitants of Dogofiri do not share the enthusiasm of Diabaly dwellers. Here, people stare at the ground and refuse to talk to foreigners.

“We know terrorists are still there hiding in the bush. They could come back at any time and retaliate,” Ousmane Diarra, a shopkeeper, tells IPS.

The few checkpoints on the dusty road, manned by two or three Malian military soldiers idling in plastic sandals, do not reassure the locals here.

“The Malian army has not been able to stop the Islamist advance — they run away. And, in spite of the attacks, security has not been reinforced,” one local, who prefers to remain anonymous, tells IPS. “It can happen again any time soon.”

“They have beaten up an old man. They also have executed a man in plain daylight,” another Dogofiri resident tells IPS. “They said he collaborated with the Islamists.”

In Dogofiri, all Tuaregs and Arabs – the “fair skinned” people who used to sell goods in the local market – have since left.

“There is a feeling of anxiety,” the local adds. “Citizens are afraid of the military.”

In another incident, last September, just a few kilometres from the town, the Malian military executed 16 unarmed Muslim preachers crossing the Mauritanian border. French-based human rights group the International Federation of Human Rights recorded at least 11 extrajudicial incidents by the army in January.

Back in Diabaly city hall, the city council is treading cautiously.

“It is not a matter of race,” Diakité stresses. “The first person killed in Diabaly by Islamists was a Tuareg. We know who is good and who is bad.”

“In Mali, we all have family members from other races,” the mayor explains, “including Tuaregs. There are criminals and there are Malians. Mali is a multi-ethnic country and we live well together.”

But other suspicions are keeping the town alert and eager for justice.

Ever since locals recognised two former high-ranking Malian military soldiers who used to be posted in Diabaly among the Islamist forces, community members believe the Islamist fighters had local support.

“People want revenge, especially the youth,” says Doumbia. “We have identified collaborators who have provided information to terrorists — we see them as traitors.”

Once the the dust is settled down, he will denounce them and justice will be served, the councilman says. But “for now, we are a country at war.”