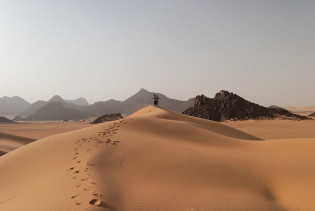 By Ousseini Issa
The little village of Chinagoder, on the Niger-Mali border, has become a refugee camp, flooded with Malian families fleeing fighting between their regular army and Tuareg rebels known as the MNLA - the National Movement for the Liberation of Azawad.

By Ousseini Issa
Women have been left in charge of many of the households in the village of Zamkoye-Koïra, in western Niger, as food shortages have driven male family members to leave in search of work elsewhere. A national survey of vulnerable households shows that 5.4 million people face food insecurity across Niger.

NIGER: Caring for the River, Reaping the Benefits

By Ousseini Issa
In anticipation of growing sorghum during the coming rainy season, Hamadou Abdou and his son are busy preparing the soil on the family's farm in Bougoum, a village in the west of Niger.

By Ousseini Issa
Bacharou Gorel had 300 head of cattle before the food security crisis began in Niger. Today he has only 53 left.

By Ousseini Issa
In April, the United Nations World Food Programme estimated it would need 190 million dollars to respond to a food crisis threatening more than 7 million people in Niger. By July, the WFP had revised the amount needed upwards to $371 million: a month later, the U.N. agency has been forced to scale back aid for lack of funds.

By Ousseini Issa
The cows Djibo Hama looks after belong to someone else, but he is diligent. Anticipating a severe shortage of good grazing in 2010, he secured cattle feed for the 35 that remain.

POLITICS-NIGER: First Steps Towards the Restoration of Democracy?

By Ousseini Issa
As its promised transition to democratic rule begins, the military junta that overthrew Nigerien president Mamadou Tandja on February 18 has named a former information minister, Mahamadou Danda, as the new prime minister while retaining legislative and executive powers for itself.

By Ousseini Issa
Nigeria and Niger, in West Africa, are neighbouring states. But the two countries have more than a border in common; they are also share a number of river basins that are under threat, and the responsibility for conserving them.

By Ousseini Issa
Stretching over more than 4,000 kilometres, the Niger is West Africa's longest river, and greatly threatened in the country of the same name by environmental degradation that is causing the water course to silt up.

NIGER: “The Capital Does Not Only Belong to the Rich”

By Ousseini Issa
The new year is looking much like the old for certain residents of the "Pays-Bas" shantytown in Niger's capital, Niamey. Four months after seeing their homes demolished in the name of safety and security, they are still waiting for resettlement at an alternative, developed site promised by authorities.

By Ousseini Issa
As fears of its destruction mount, city authorities have taken steps to protect the forest, or the greenbelt, around Niamey and evict squatters living within its confines. The forest protects the city from encroaching desertification and the extremes of Niger's climate.

By Ousseini Issa
Abdou Adamou spends his days in a pit 50 to 80 metres below ground at the Komabangou gold prospecting site. His job involves hacking up rocks and raising them to the surface with a bucket.

By Ousseini Issa
"It’s not easy to give up a profession passed down to you by your parents that you’ve been at for years. But once you become aware of the grave harm you do others in this job, you have to quit," says Salmou Himadou.

CULTURE-NIGER: Archaeological Treasures May Soon Become a Thing of the Past

By Ousseini Issa
There’s no doubting that authorities in Niger have a host of problems to grapple with. United Nations estimates put the number of people living beneath the poverty line in this country in the region of 60 percent – while life expectancy stands at about 46 years.
Next Page »
ADVERTISEMENT ADVERTISEMENT