BOBOYE, Niger, Feb 4 2012 (IPS) - Women have been left in charge of many of the households in the village of Zamkoye-Koïra, in western Niger, as food shortages have driven male family members to leave in search of work elsewhere. A national survey of vulnerable households shows that 5.4 million people face food insecurity across Niger. 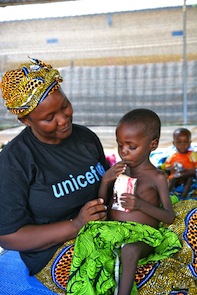 A young child suffering from malnutrition at a nutritional recovery center in Maradi region in central-east Niger. Credit: UNICEF/Giacomo Pirozzi

“The men have gone to look for a way to feed the women and children left behind in the village, because there was no harvest at all this year,” 40-year-old Bibata Mounkaïla told IPS.

“We’ve eaten only once a day for several months,” the mother of eight said, in the midst of making a simple porridge out of sorghum that will have to satisfy her family for the whole day. “The situation also means that our children are no longer going to school – the nearest one is in a neighbouring village, three kilometres from here.”

Aoudi Adamou, a family head who has chosen to stay, fears the crisis will grow worse if food aid to vulnerable people, announced by the government, arrives late.

“It’s only thanks to support from other families that some are still finding something to eat,” he told IPS, “but this situation cannot last for long. The authorities have to come quickly with aid if we are to avoid a disaster.”

Adamou’s distress call is echoed from several parts of the landlocked West African country, which this year faces a serious food crisis following a poor growing season in 2010 to 2011. Poor rains resulted in a deficit of more than half a million tonnes of grain and a shortfall of fodder for livestock of more than 10 million tonnes.

The vulnerability survey, carried out in December 2011, found that more than a third of the population of 15.7 million are in a position of food insecurity – 1.5 million will face severe food shortages.

The government and its partners are trying to mobilise resources to avert this major food crisis – “which is already upon us”, according to Eric-Alain Ategbo, the chief nutrition expert for the United Nations Children’s Fund office in Niamey, the Nigerien capital.

According to Ategbo, some 330,000 children are facing severe malnutrition presently, and nearly 700,000 more face moderate hunger. “We have seen 20,000 cases of malnourishment across the country, with 5,000 new cases recorded each week (in medical centres).”

Launching an appeal for aid in the western town of Tillabéri on Jan. 17, Nigerien Prime Minister Brigi Rafini said the country needed some 224 million dollars.

These resources would be put towards actions to ease the crisis, such as the launch of a major expansion of irrigated farming, the purchase and distribution of animal fodder, and other efforts against malnutrition, according to Rafini.

But for Hassoumi Sadou, a member of a farmers’ cooperative in Niamey, “the success of the operation will depend on the direct involvement of producers in the implementation of the actions. This is still not the case,” he told IPS.

The international non-governmental organisation Save the Children, based in London, has spoken out in support of the Nigerien government, calling on the international community to urgently mobilise funds for children threatened by malnutrition.

In a communiqué published on Jan. 27, the NGO said some three million Nigerien children are facing hunger, putting the cost of interventions needed to avoid disaster at 47 million dollars.

N’Dèye Marianne Tounkara, Advocacy Director for the Newborn & Child Survival programme at the Niamey office of Save the Children, says the appeal aims bring international attention to the risk of a major food and nutrition crisis in Niger in the coming weeks.

“We must act quickly to put in place corrective and preventive measures to reduce the threat,” she told IPS.