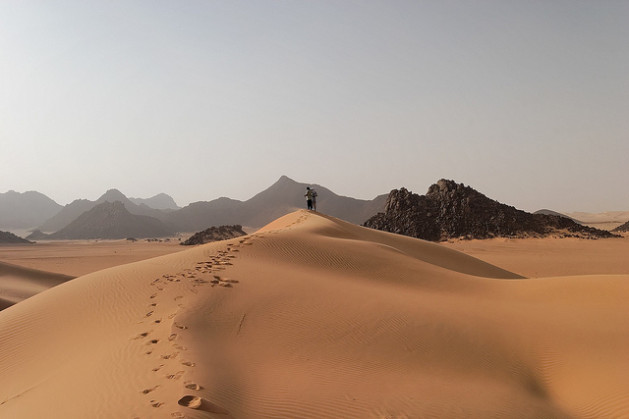 The Ténéré desert in northern Niger is fast encroaching on the salt pans in Bilma, a community that has been reliant on mining the mineral for centuries. Credit: Photomatt28/CC BY 2.0

BILMA, Niger, May 15 2013 (IPS) - The Bilma community has mined the salt pans in the massive Ténéré desert region in northern Niger for centuries. But the threat of the ever-encroaching desert has become a real concern as locals here struggle to cope with a decline in salt prices.

“If we don’t protect this site, salt mining will disappear under the sand,” Abdoulaye Soumana, Bilma’s departmental director for the environment, told IPS as he contemplated the vast sand dunes enclosing the Kalala salt pan, a mining site in Bilma.

The Ténéré is a region in the south-central Sahara desert consisting of a vast plain of sand that stretches from northeastern Niger into western Chad.

According to Soumana, an environmental technician, the desert stretches out across a bed of clay, containing hundreds of hectares of salt.

“Some salt pans are already submerged (by sand), but the local authorities haven’t quite understood the extent of the threat. They only care about the money generated from Bilma’s production,” he remarked.

According to Bilma’s mayor, Abba Marouma Elhadj Laouel, there are about 6,000 inhabitants here – all involved in salt mining. Many have mined the pits for years, digging into the earth to extract the salt.

Boulama Laouel, the chair of the Kalala salt miners cooperative, agreed. “Salt is the main livelihood for the people of Bilma. Even though it’s difficult to sell, every family has a salt pit that they mine,” he told IPS.

A 2011 study carried out by Soumana found that Bilma salt miners earn about 800 dollars a year, while their counterparts in the northern town of Siguidine bring in 1,842 dollars annually.

Fadji Boulama, a 35-year-old salt worker and mother of five, does not remember another way of life.

“Salt mining is an age-old activity here in Bilma. My grandparents were miners. My parents took over their trade and then passed the baton on to me. It’s our main livelihood,” she told IPS from the salt pit she mines.

“My husband migrated to Libya, so three of my children, ages nine, 12 and 14, help me when they are not in school. The sales from the salt cover my everyday household costs,” Boulama added.

“Bilma’s animal salt contains a number of mineral nutrients crucial for the healthy growth of animals and the quality of their meat,” Oumarou Issaka, a veterinarian based in the country’s capital, Niamey, told IPS.

But locals have complained that they are unable to sell their salt at reasonable prices because of the lack of road infrastructure to and from this isolated northern region.

Yagana Arifa, who works on a salt pit next to Boulama, explained to IPS: “This work gives us enough to eat and meet some expenses, but without a road, it’s not easy to get a good price for our product.

“Our main clients are the caravan traders who currently pay 20 cents for a two-kilogramme block of salt and then sell it for a dollar in Agadez (the main town in the area to the north) or for more than 1.20 dollars in the south of the country.”

Salifou Laouel, the mayor of the Fachi rural municipality, which lies some 240 km west of Bilma, confirmed that producers from his area face similar problems.

“We are forced to sell at very low prices because of our isolated location. Ordinary trucks can’t cross the desert to carry our produce to more profitable markets in the south,” Laouel told IPS.

“Salt for animal feed is in highest demand. In Fachi, we produce about 450 tonnes a year, which earns us about 138,000 dollars,” he added.

Denise Brown, the resident representative of the United Nations World Food Programme, said the agency would support the salt miners by using their kitchen salt in its local school meal programmes.

“We are assessing how we can purchase a fixed quantity of their output to support marketing, so long as it meets iodine content requirements set by the World Health Organization,” she told IPS.