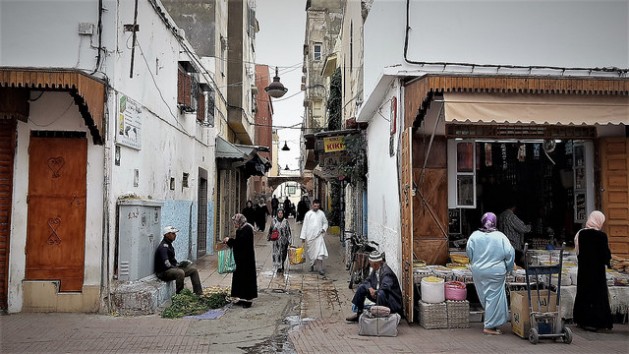 NADOR, RABAT and CASABLANCA, Morocco, Jan 6 2017 (IPS) - With a stable economy and a peaceful political climate, Morocco – which has always been a transit country for migrants — is becoming a potential new destination for settlement. The elusive dream for most of those who cross the Sahara, though, is still Europe.

No more than 15 kilometers separate the Spanish enclave Melilla and the Moroccan coastal city of Nador, in the northeastern Rif region. This tiny Spanish town of 70,000 people became a major crossing point for those seeking to reach asylum in Europe.

"The image of living in Europe is changing and some of them prefer to stay in Morocco as long as they can access rights. It’s not a super-developed country, but neither is it a super-poor country." --Miguel Hernandez Garcia

Melilla, together with Ceuta, are the remaining Spanish territories on the African continent and the European Union’s only land border. Precisely for that reason, many Sub-Saharan Africans and increasing number of Syrians dream of reaching the other side as a promised land and better life.

Both cities erected fortified borders as the pressure from migrants increased. Every year, hundreds of Sub-Saharans (many of those undocumented in Morocco) endeavor to cross the fences or embark on the perilous journey by boat across the Mediterranean.

Last month, rescue ships saved around 60 migrants who were adrift not far from Melilla. In early December 2016, at least 400 people broke through the border fence of Ceuta. On Jan. 1, another wave of 1,100 African migrants attempted to storm the same fence.

Mohamed Diaradsouba, 24, risked his life after he decided to depart Ivory Coast. He traveled almost 5,000 kms from Abidjan to Nador, passing through Mali and Algeria. He left his wife and one-year-old son with the hope of one day coming back.

“Where I lived there was no employment, I couldn’t get money to survive. I came to Morocco because I want to cross to Spain. But here there is no job either. I’m sure I’ll find a job in Spain, France, Belgium or Germany and make my living,” he told IPS.

He and a group of four companions rely on small donations provided by activists and the Catholic Church in Nador. Undocumented migrants are not tolerated by local police, who frequently conduct street sweeps and arrest those without legal papers.

When IPS talked to Diaradsouba on a cold November night, he was living in a rural community called Khamis-akdim, a 15-minute drive from Nador. It had been three months since he and some 300 other people Sub-Saharans Africa had set up a makeshift camp in the surrounding forest due to fear of entering the city. 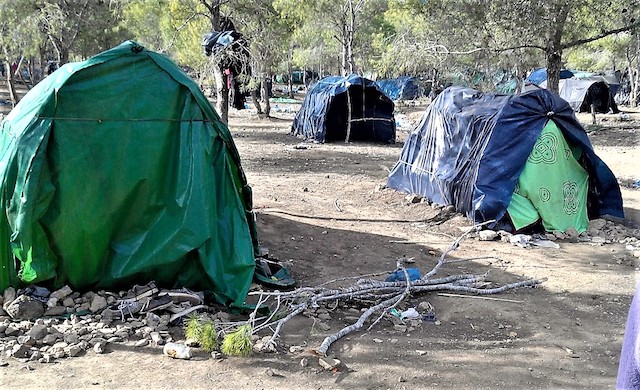 “We’re camping in the bushes up on a hill. Life here is not easy. We have to walk every day to fetch water and food. We sleep in plastic tents, so when it rains everything gets wet. I didn’t bring any suitcase with me, I’m only wearing my clothes. We’re afraid of the police, they don’t know what human rights are, I’d better stay in the forest,” he said, noting that other nationalities like Cameroonians, Guineans and Malians share the same campsite.

The Ivorian migrant did not have any legal papers, refugee card or asylum seeker certificate of any kind. He is among the thousands of invisible undocumented foreigners in Morocco who are not recognized by the United Nations Refugee Agency (UNHCR) or the Moroccan government.

“It’s difficult to get a paper or a residency permit. I’d have to travel to the capital Rabat (10 hours by train) to make a request. I’m waiting for my luck, one day it will come,” he said.

Diaradsouba had no idea how long he would have to wait to attempt his crossing to Europe. He was still unsure whether he would risk getting through the fences to Melilla, hide himself in the backseat of a car or go by boat. “There’s no fixed price to pay for a boat. We try to gather [funds] among 30 or 40 people. Everything will depend on how much money we’ll have to pay.”

Aziz Kattouf, an activist with the Moroccan Association for Human Rights (AMDH), confirms that those people camping on the forest live in terrible conditions, but he says at least they are in a “safer place” than Nador.

“They’re far from the police’s eyes. They don’t want to stay, their only hope is to cross,” he told IPS, adding that there are other four large camps in the forest where undocumented people have erected tents.

Every two or three weeks, the police raid the camps. “They apprehend men and sometimes children, destroy their tents and take their phones. Many are sent by buses to further areas in the south of Morocco. But they always come back to the camps,” said the activist.

Living alongside the foreigners altered the daily life of residents of Khamis-akdim, but there has not been a case of mistreatment or racism against them. In fact, the local Berber farmers have shown solidarity, said Alwali Abdilhate, a Tamazight speaker.

“We have good relations with the people who are camping. Early in the morning, they go to the streams or waterholes to wash their clothes and buy food in our local market. There’s a bar that allows them to recharge their cell phones,” said Abdilhate, whose family home is located right by the path migrants take to reach the camping area.

A few weeks after the initial interview, Diaradsouba contacted IPS to say he had managed to reach Spain by boat entering through Almeria. He had to pay 2,500 euros to embark on the 12-hour sea journey.

According to the International Organization for Migration (IOM), between January and December 2016, 8,162 migrants arrived by sea in Spain, while 69 people died attempting the crossing.

The majority of migrants in Morocco are Sub-Saharan male adults between 18 and 59 years old, says Miguel Hernandez Garcia, coordinator of a program run by the Association Droit et Justice that provides legal assistance for refugees and asylum seekers.

“There are different reasons for leaving their countries, threats of physical violence or political reasons. Some are in touch with members of their communities who have reached Europe and say living conditions aren’t what they used to be in the past. The image of living in Europe is changing and some of them prefer to stay in Morocco as long as they can access rights. It’s not a super-developed country, but neither is it a super poor country,” Garcia told IPS.

Morocco became the first Arab country to develop a policy that offers undocumented migrants the chance to gain permanent residency. In 2013, the King of Morocco Mohammed VI gave momentum to a new policy on migration after receiving recommendations from the National Council for Human Rights.

“Morocco ratified international conventions and needed to implement policies. It wanted to show a good image to the world as a welcoming country. It was a clever idea to put out this strategy to the international community as an open mind State with humanitarian will. Besides, it’s also a good thing for the economy,” said Garcia.

During a full one-year campaign for regularization, more than 90 percent of the 27,000 migrants who applied were documented. The government is now discussing in Parliament a raft of related legislation – the first law approved on the scope of the new policy was against human trafficking. A second law that still pending is about asylum.

“It’s basically to guarantee the access to rights for migrants. It’s only three years now that this policy is running and still no official body is in charge of it,” Garcia added.

Jean–Paul Cavalieri, the UNHCR representative in Morocco, said the first challenge is to finalise the law on asylum and extend medical benefits to refugees and regular migrants.

“Another challenge has to do with the territorialization of the policy, how you implement the policy on the ground in remote areas. The migrants are spread out across the country. That could be a model for [other] countries in the region. What we want is that refugees are able to find asylum and a protected space. It’s just the beginning, the policies are being developed, but it has to expand and be implemented.”