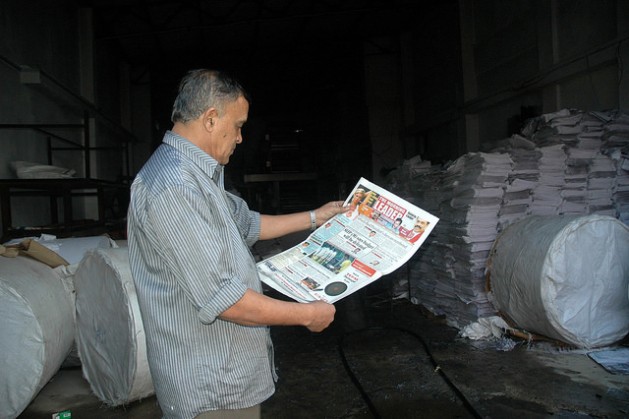 There was no big PR campaign on the part of the government to unveil it on Feb. 3, a day before the island’s 69th Independence celebrations. There was not even a public event, a rarity in this South Asian island, where politicians are prone not to let such opportunities pass by.

Maybe the lack of fanfare was due to a rare understanding of what RTI could do to Sri Lanka’s governing culture – like media minister Gayantha Karunathilake predicted several months ago, the act now places all elected and public officials ‘inside a glass box’ of public scrutiny.

And the requests have flooded in. Taking the lead has been actor turned politician and current deputy minister of social welfare, Rajan Ramanayake. He filed a slew of requests even before the ink dried on the new act.

“This is an act will reveal everything about politicians, without any discrimination on party affiliations,” Ramanayake said.

His RTI requests include details on the number of bar permits, sand mining permits, duty free shop permits, fuel station permits and land permits that have been offered to elected officials from parliamentarians to those at local government bodies. He said he was likely to receive the details by the third week of February.

He has also filed a request for details of all licenses given out by the government to operate TV stations and their conditions.

Most of the first batch of RTI requests have been linked to corruption within public sector, according to RTIWire, a national website that tracks the progress of the act.

“When we asked the public what information they would seek through RTI, almost a third of them referenced some form of corruption by public servants; for example, asset declarations, irregularities in tenders, salaries and perks for ministers,” RTIWire said in profiling the first ten days of the new act.

Citizens in the former conflict zone in the North and East have used the act to seek information on land acquisitions by government departments and on missing loved ones.

Media Minister Karunathilake is candid about the act’s possible ramifications on the government ,which has stepped into the second of a five-year term.

“This will open up the government structure completely for scrutiny. Usually governments will take this kind of decision at the toe end of their terms, but we have not. The act can minimize corruption.”

There has been criticism leveled at the government that the act was aimed at soothing international concerns on rights issues, especially those stemming from the administrations of former president Mahinda Rajapaksa between 2005 to 2015.

The minister denied that there was any connection between the act and the government’s efforts to regain preferential tariff deals for garment exports to the European Union.

“There is no connection at all,” he said. In the next two months the EU is expected to announce whether Sri Lanka will be allowed back in to GSP+ tariff fold that it lost in 2010 due to rights-related concerns.

Opposition parties, however, say that the government is not showing the same enthusiasm it displayed in getting the act finally functioning in making sure the act is implemented efficiently.

“If they are serious, they should begin awareness campaigns without delay,” Opposition MP from the People’s Liberation Front Nalinda Jayatissa said.

To be fair, the government has a Herculean task on its hands in getting RTI information officers into all government agencies, which according to some estimates at the Media Ministry could be in the range of 40,000.

The Ministry has been training officers in the last few months, and while several thousand have taken up posts, many more remain to be filled. The government has not done itself any favours by only allocating a mere Rs 25 m (175,000 dollars) in the current budget for RTI implementation.

Close to two weeks after the act became law, the government was yet to announce the relevant officers in departments, adding confusion and creating unnecessary delays for those submitting requests. B.K.S. Ravindra, the additional secretary at the Media Ministry, said that list would soon be made available online, but did not give a date.

During the first week of the act, there was also confusion about whether police came under the act and who was the relevant officer for each station. Ravindra said that police stations indeed came within the act and that the Assistant Superintendent of Police from each district would serve as the RTI officer.

But according to RTIWire, “the Police are still in the process of appointing Information Officers. This should be complete within the next few weeks. The police force is currently participating in trainings held by the Ministry of Mass Media on Right to Information.”

There is also a dearth of awareness in rural areas on the act and how to file requests, especially in rural areas. In Arananayake, a rural village about 130km from the capital Colombo, which suffered a devastating landslide last year, villagers still living in temporary shelters had absolutely no idea that they could gain information from using the act.

The bigger test for the government will be to make sure that the RTI act does not end up a damp squib.