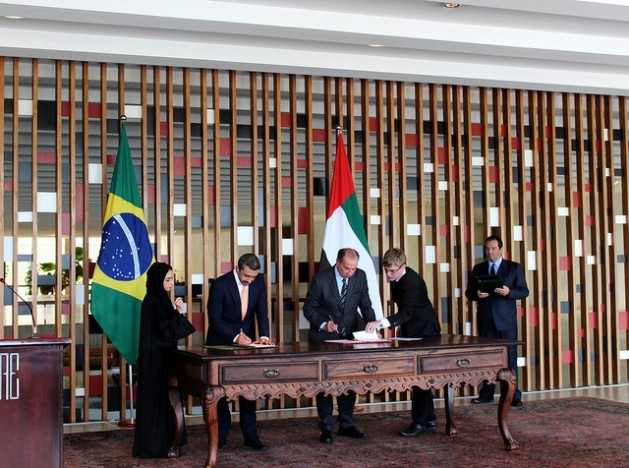 BRASILIA, Mar 16 2017 (IPS) - The foreign minister of the United Arab Emirates (UAE), Sheikh Abdullah bin Zayed Al Nahyan, made his fifth visit to Brazil Thursday, Mar. 16, in search of new opportunities to exploit the enormous potential in relations between the two countries.

In statements to reporters in the Itamaraty Palace, the headquarters of Brazil’s foreign ministry, after a working meeting with his Brazilian counterpart Aloysio Nunes, Al Nayhan said he was “very pleased about the strengthening of ties of friendship between the two countries seen year by year.”

“There are great opportunities between the UAE and Brazil, not only in the economy and trade, but also in other sectors, like tourism. We are particularly interested in increasing the presence of Brazilian nationals in our country,” he added.

He said he was pleased that 60,000 Brazilians a year visit the UAE, making the Persian Gulf country the third destination for tourists from Latin America’s giant. “Brazil is opening up and finding new horizons in other parts of the world,” he said.

Al Nahyan, who has been foreign minister since 2006, commented that the Middle East currently finds itself in a complex moment, making it necessary to jointly take on challenges like fighting violence and terrorism.

Brazil’s foreign minister said they discussed a wide variety of questions on the regional and global agenda, as well as bilateral issues.

Nunes stressed that the latest visit by Al Nahyan, who also came to Brazil in 2009, 2010, 2012 and 2014, “shows the high priority that the two countries put on bilateral relations and cooperation.”

The Brazilian official was referring to the mutual interest of the private sector in the two countries in long-term projects in strategic areas like infrastructure, industry and services, and to investment in Brazil by the Abu Dhabi Investment Authority (ADIA), considered the second-largest sovereign wealth fund in the world, worth nearly one trillion dollars.

The two ministers signed three bilateral accords during the meeting. Two of them were visa waiver agreements, and another involved the strengthening of air travel services between the two countries.

The UAE is home to the largest community of Brazilians in the Gulf: 4,500.

The Emirati minister will visit Argentina on Friday Mar. 17, before returning to Brazil on Mar. 21, to participate in the inauguration of the new UAE consulate-general in São Paulo.

Relations between the two countries were formally established in 1974. The Brazilian Embassy in Abu Dhabi opened in 1978, and in 1991 the UAE opened its first embassy in Latin America, in Brasilia.

Ties grew stronger in recent years thanks to the number of visits by high-level Brazilian officials to the UAE: 31 ministers and 14 state governors since 2007, it was noted on Thursday.

The new emphasis on bilateral ties began in December 2003, with the visit to the UAE by then president Luiz Inácio Lula da Silva (2003-2011), at the head of a broad delegation of government officials and business leaders.

Ten years later, in 2013, then vice president Temer made an official visit to the Emirati cities of Abu Dhabi and Dubai.

Since 2008, the UAE haaçs become Brazil’s second-largest trading partner in the Middle East, after Saudi Arabia, in terms of bilateral trade.

The UAE is currently one of the biggest Middle Eastern importers of Brazilian goods, such as chicken, refined sugar, aluminum oxides and hydroxides, and cast-iron pipes.

Brazil imports from the UAE products like sulphur and electrical control panels and distribution boards.

More than 30 Brazilian companies have offices in the UAE, a business hub which re-exports products to third countries and large markets, such as Saudi Arabia, India, Iran and Pakistan.

In 2014, the two nations reached a defence accord that included the exchange of technology, cooperation in military instruction and training, weapons, crisis management, and logistical support in United Nations peacekeeping missions.

It was the first treaty of its kind signed by Brazil with a Middle Eastern country.

A new phase has now been launched in the promotion of trade and the exchange of people to make Brazil the UAE’s main ally in Latin America.