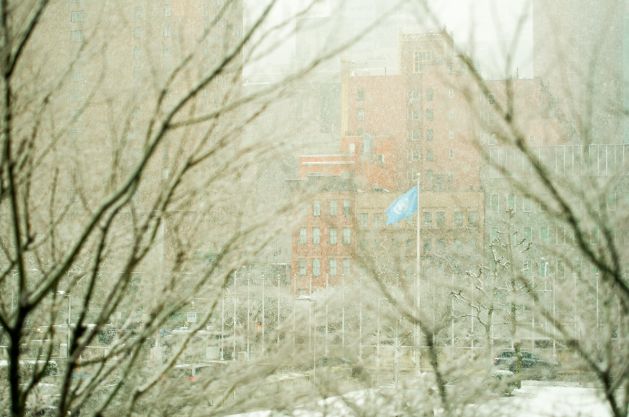 UNITED NATIONS, Mar 17 2017 (IPS) - In the midst of responding to the worst humanitarian crisis since records began, the UN is now faced with potential funding cuts from its biggest donor, the United States.

On Thursday, U.S. President Donald Trump released “America First: A Budget Blueprint to Make America Great Again,” the first such budget proposal of his presidency. The blueprint’s biggest proposed cuts target the Department of State, which would lose 29 percent of its budget, and the Environment Protection Agency, which would lose 31 percent.

Although details of exactly how the proposed cuts – which still require approval of U.S. Congress – would be made, are yet to emerge, funding for the UN and the USAID which both fall under the State Department is at risk.

“If approved – and that’s a big “if” – the Whitehouse’s plans could slash several billions in UN funding,” Natalie Samarasinghe Executive Director of the United Nations Association of the UK, told IPS.

These billions of dollars of potential cuts come at a time when the United Nations is occupied responding to both acute and chronic crises around the world.

“The number of people forced to flee their homes is now the biggest since records began,” she said. “These are people for whom the UN is literally the difference between life and death,” she said.

“The total foreign aid of the U.S. is about one percent of the budget - not 10 or 15 percent as some people seem to think - it’s one percent.” -- Michel Gabaudan

Michel Gabaudan, President of Refugees International, told IPS that it is important to keep the United States contribution in perspective when assessing the potential cuts.

“The U.S. contribution is critical, it is generous, it is vital, but it is not unduly high compared to other countries of the western bloc – who are the main funders of humanitarian aid – and we must keep this contribution in perspective.”

“The total foreign aid of the U.S. is about one percent of the budget – not 10 or 15 percent as some people seem to think – it’s one percent.”

“The magnitude of the U.S. economy means that that one percent of money is critical to humanitarian relief and to development programs but if you compare this with what some European countries are doing, like Switzerland, like the Nordics, like the Dutch … they are certainly giving more in terms of dollar per capita of their citizens,” he said.

She said that it would be “politically challenging for European countries to pick up the slack, especially with elections looming in a number of countries.”

As an example, said Samarasinghe, a recent appeal from the Netherlands to fund reproductive health and safe abortions has not yet reached its $600 million target. That appeal was set up after Trump re-instated the Global Gag Rule, which removes U.S. funding from non-governmental organisations that carry out any activities related to safe abortion, regardless of the funding source.

Meanwhile, Deborah Brautigam an expert on China in Africa told IPS that it is unlikely that China will increase its funding to the United Nations as the United States steps back, because China already feels “very comfortable” in its current position at the UN. This position includes a permanent seat on the UN Security Council and UN development policies, which align with China’s priorities, such as industrialisation, said Brautigam who is Professor of International Political Economy and Director of the China Africa Research Initiative at Johns Hopkins University.

Two UN agencies that receive the most funding from the United States are the World Food Program, which provides emergency food assistance, and the UN High Commissioner for Refugees (UNHCR).

However Gabaudan said that both the more immediate humanitarian aid as well as long-term development assistance are needed to address the world’s crises:

“Most displacement crises are protracted, people don’t leave and get back home after a year or two,” he said, as is the case with the Syrian conflict, which just surpassed six year on March 15th.

The budget proposal also reinforces other aspects of the emerging Trump Republican administration policies, including sweeping cuts to environment programs and cuts to programs, which assist the poor in the United States.

“In many areas, the UN spends more money than it should, and in many ways it places a much larger financial burden on the United States than on other countries.”

However that financial relationship between the UN and the host of UN Headquarters is not unidirectional. According to the latest New York City UN Impact Report, the UN community contributed 3.69 billion dollars to the New York City economy in 2014.

In response to the budget blueprint Stéphane Dujarric, Spokesman for UN Secretary General Antonio Guterres said that “the Secretary-General is grateful for the support the United States has given to the United Nations over the years as the organisation’s largest financial contributor.”

“The Secretary-General is totally committed to reforming the United Nations and ensuring that it is fit for purpose and delivers results in the most efficient and cost-effective manner.”

“However, abrupt funding cuts can force the adoption of ad hoc measures that will undermine the impact of longer-term reform efforts,” said Dujarric.

Dujarric’s statement also addressed aspects of the proposed budget, which claim to address terrorism. The proposal, which significantly increases spending on the U.S. military appears to favour a “hard power” militaristic approach over a “soft power” diplomatic and humanitarian approach.

“The Secretary-General fully subscribes to the necessity to effectively combat terrorism but believes that it requires more than military spending,” said Dujarric. “There is also a need to address the underlying drivers of terrorism through continuing investments in conflict prevention, conflict resolution, countering violent extremism, peacekeeping, peacebuilding, sustainable and inclusive development, the enhancement and respect of human rights, and timely responses to humanitarian crises.”