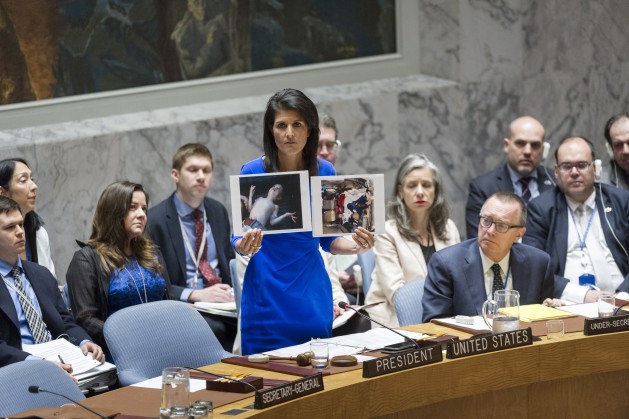 Nikki Haley, U.S. Permanent Representative to the UN holding up pictures of victims of the alleged chemical weapons attack in Syria which prompted the Trump administration to launch an airstrike against the Assad government. Credit: UN Photo/Rick Bajornas

Several rights groups responded Friday, calling on Trump to repeal the ban, which applies to migrants from Syria and 5 other countries in Africa and the Middle East.

“Trump was using very strong words last night to describe the cruelty and the horrors that children and civilians in general are enduring (in Syria),” Maria McFarland Sánchez-Moreno, co-director of the US Program at Human Rights Watch told IPS.

“To try to keep refugees out of the United States is cruel,”McFarland Sánchez-Moreno added. “It’s contrary to the values that the U.S. has traditionally claimed to hold dear and inconsistent with some of the words that President Trump himself used last night.”

Speaking from Palm Beach, Florida on Thursday night Trump described how “even beautiful babies were cruelly murdered” in the alleged chemical weapons attack which took place earlier this week.

“Years of previous attempts at changing Assad’s behavior have all failed, and failed very dramatically.  As a result, the refugee crisis continues to deepen and the region continues to destabilize…” Trump continued.

“If we truly want to help protect the people of Syria, we must also be willing to offer the Syrians assistance as they flee attacks in search of safety," -- Noah Gottschalk, Oxfam America

However despite the airstrike marking a change in direction in Syria for the Trump Republican administration, there is no indication the administration is considering a similar shift in its policy towards Syrian refugees.

Reactions from the 15 member states of the UN Security Council to the airstrike on Friday were mixed, with some supporting the strikes even though the United States carried out the unilateral attack without the backing of the council. Others, including Bolivia, which called the meeting, strongly opposed the attack.

Lord Steward Wood of Anfield, Chair of the UN Association of the UK, a civil society organisation questioned the United States decision to take “unilateral action without broad international backing through the UN,”

He said that such action “without a clear strategy for safeguarding civilians, and through further military escalation risks further deepening and exacerbating an already protracted and horrific conflict, leaving civilians at greater, not lesser, risk of further atrocities.”

“In the meantime, if President Trump wishes to help the victims of Assad’s atrocities, he could pledge to play a leading role in resettling the survivors,” Wood added.

Gottschalk said that the “innocent families” that Trump referred to “who were killed in Idlib are no different than the people who are attempting to seek refuge in the U.S.”

“Oxfam is urging the President to change course on his discriminatory ban that blocks Syrian civilians from finding refuge in the United States,” he said. “If we truly want to help protect the people of Syria, we must also be willing to offer the Syrians assistance as they flee attacks in search of safety.”

Although this is the first time that the United States has directly targeted Bashar Al-Assad’s government, airstrike monitoring project Airwars reports that there have been 7912 US-led coalition strikes targeting the so-called Islamic State since 2014. Airwars has also reported a spike in civilian casualties related to coalition air strikes in March 2017, rating 477 civilian casualties reports as ‘fair’.

However Airwars also reported that the U.S. strike on Shayrat Airfield in Homs in the early hours of Friday 7 April destroyed “up to 12 aircraft” describing this result as “significant” considering that “the primary cause of civilian deaths by (the) Syrian regime remains airstrikes.”

Earlier this week spokesmen for the UN Secretary-General Stéphane Dujarric said that the Secretary-General was “deeply disturbed by the reports of alleged use of chemical weapons in an airstrike in the Khan Shaykhun area of southern Idlib, Syria.”

“The Secretary-General expresses his heartfelt condolences to victims of the incident and their families.”

Guterres had not yet commented on the U.S. airstrike against the Syrian government as of Friday evening.

Almost five million people have fled Syria since the conflict began over six years ago. Many areas of Syria are besieged and inaccessible to humanitarian assistance as well as UN monitors. This makes it difficult for the UN to monitor attacks such as the alleged chemical weapons attack which took place this week. This is also why the UN no longer provides an official death toll for the conflict, however in April 2016, UN Special Envoy to Syria Staffan de Mistura said that it is likely more than 400,000 people had been killed.