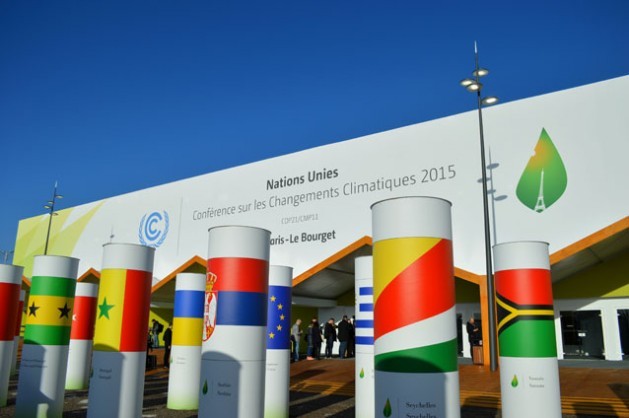 Trump indicated the US is open to re-negotiating the Paris agreement. But European leaders quickly responded there is no such possibility. Credit: Diego Arguedas Ortiz/IPS

PENANG, Malaysia, Jun 5 2017 (IPS) - By withdrawing the United States from the Paris Agreement, President Donald Trump abdicated not only leadership but membership of the community of nations cooperating to tackle climate change, the most serious crisis facing humanity.

Trump’s announcement was shocking, even though it was not unexpected.

It was shocking for showing the extreme lengths to which the President would go to deny scientific opinion on climate change and defy the position of almost all other countries, on an issue that may well determine the fate of the Earth and human civilisation.

The decision was against the advice of most members of his inner-most circle of advisors, many corporate leaders, and the other G7 leaders who spent an entire frustrating day in Sicily trying to explain to him the critical importance of the Paris deal.

Just as disturbing as the withdrawal was Trump’s speech justifying it.  He never acknowledged the seriousness or even the existence of the climate change crisis, which poses the gravest threat to human survival.   He lamented that Paris would hinder US jobs, mentioning coal in particular while ignoring the jobs in renewable energy that would increase manifold if the US adopted an energy policy to counter global warming.

His main grouse was that the Paris agreement was “unfair” to the US vis-à-vis all other countries, as if it had been designed specifically to cheat the US.  And he grumbled that the US would have to pay billions of dollars to developing countries through the Green Climate Fund.

The speech was riddled with many misconceptions and factual errors, which many scientists, politicians and NGOs are now busy refuting.

Condemnation came fast and furious from within the US and around the world.  A notable comment came from John Kerry, former Secretary of State under Obama:  “He’s made us an environmental pariah in the world….It may be the most self-defeating action in American history.”

Trump indicated the US is open to re-negotiating the Paris agreement.   But European leaders quickly responded there is no such possibility.  The UNFCCC secretariat correctly pointed out that a single country cannot decide on a re-negotiation.

Indeed, it would require a consensus of its 195 members to make amendments to the Paris Agreement or even agree to a re-negotiation.

That will not happen, as the agreement is a delicately balanced outcome which took many years of long and complicated negotiations to achieve.  To re-negotiate it would in effect be kill it.

The best response to the Trump decision is for others to resolve to do even more to combat climate change.  In the US itself, many states and cities have announced they will form an alliance and continue with their climate actions.

Condemnation came fast and furious from within the US and around the world. A notable comment came from John Kerry, former Secretary of State under Obama: “He’s made us an environmental pariah in the world….It may be the most self-defeating action in American history.”
An increasing number of countries including China, India, Germany, France, Italy and Canada as well as the European Union leadership have announced they will honour their Paris commitments despite the US pull-out.   There are no signs, so far at least, that any other country intends to follow the US out of Paris.

Indeed the Trump decision to leave Paris will be a milestone marking a huge loss of international prestige, influence and power to the US.   In a world so divided by ideology, inequality and economic competition, the Paris agreement was one rare area of global consensus and cooperation, on climate change.

For the US to pull out of that hard-won consensus is a shocking abdication not only of leadership but of its membership of the community of nations in its joint effort to face up to perhaps its gravest challenge of survival.

The lack of appreciation of this great crisis facing humanity and the narrow-mindedness of his concerns was embarrassingly evident when Trump made his withdrawal speech.  He was more interested to revive the sunset coal sector than in the promise of the fast developing renewable energy industries.

He was convinced reducing emissions would cost millions of jobs, ignoring the record of many countries like Germany that have de-coupled emissions growth from economic growth.  He was miserly towards poor countries which are receiving only a fraction of what they were promised and what they need for climate mitigation and adaptation, while celebrating hundreds of billions of dollars worth of new deals for his armaments industry.

He complained that the US is asked to do more than others in the Paris agreement when in fact the US has the highest emissions per capita of any major country and its pledged rates of emissions reduction are significantly lower than Europe’s.   He saw the speck in everyone else’s eyes while totally oblivious to the beam in his own.

Just as alarming as withdrawing from Paris is Trump’s comprehensive dismantling of Obama’s climate change policies and measures.   This will make the US unable to meet the target it chose under the Paris agreement:  a cut in emissions by 26-28 per cent by 2025 compared to the 2005  level.   The gap between the US target (which is already unambitious compared to what the science requires and compared to the European Union) and the expected higher emissions levels influenced by Trump’s policies, will worsen the global shortfall in emission reduction.

What will now happen in the UN climate convention, home to the Paris agreement?   The negotiations to establish the guidelines for countries to implement of the agreement will continue in the years ahead.

A complication is that the US has to wait three years from November 2016 (when the agreement came into effect) before withdrawing from Paris and then wait another year for this to come into effect.

The US will thus still be a member of the Paris agreement for the rest of Trump’s present term, although he announced he will not implement the Paris target that Obama had committed to. This defiance will likely have a depressing impact on other countries.

By also being still a member, the US could play a non-cooperative or disruptive role during the negotiations on many topics.  We can anticipate that the US will challenge principles or actions that have already been accepted or that are to be transformed into actions,  such as common but differentiated responsibilities to be operationalized in all areas;  equal and balanced treatment for mitigation and adaptation;  providing adequate financial resources for developing countries;  transparency of actions and of finance; and technology transfer.

Since the Trump has already made clear the US wants to leave Paris, and no longer subscribes to its emissions pledges (nationally determined contributions) nor will it meet its US$3 billion pledge on the Green Climate Fund, it would be strange to enable the country to still behave in the negotiations with the same status as other members that remain committed to their pledges.   How to deal with this issue is important so that the UNFCCC negotiations are not disrupted in the four years ahead.

Finally, the Trump portrayal of developing countries like India and China as profiting from the US membership of the Paris Agreement is truly unfair.

China is the number one emitter of carbon dioxide in absolute terms, with the US second and India third.   But this is only because the two developing countries have huge populations of over a billion each.

In per capita terms, carbon dioxide emissions in 2015 were 16.1 tonnes for the US, 7.7 tonnes for China and 1.9 tonnes for India, according to one authoritative estimate.  It would be unfair to ask China and India to have the same mitigation target as the US, especially since the US has had the benefit of using or over-using more than their fair share of cheap fossil-fuel energy for over a century more than the other two countries.

A recent New York Times editorial (22 May 2017) compared the recent performance of India and China with the recent actions of the US under President Trump.  It states:  “Until recently, China and India have been cast as obstacles…in the battle against climate change.   That reputation looks very much out of date now that both countries have greatly accelerated their investments in cost-effective renewable energy sources — and reduced their reliance on fossil fuels.  It’s America – Donald Trump’s America – that now looks like the laggard.”

It cites recent research that China and India should easily exceed their Paris agreement targets, with China’s emissions appearing to have peaked more than 10 years sooner (than pledged) and India expected to obtain 40% of its electricity from non-fossil fuel sources by 2022, eight years ahead of schedule.   It criticises the Trump administration for destroying Obama’s initiatives based on his Paris pledge to reduce America’s greenhouse gases.

“China and India are finding that doing right by the planet need not carry a big economic cost and can actually be beneficial,” said the editorial.   “By investing heavily in solar and wind, they and other countries like Germany have helped drive down the cost of those technologies where in many places renewable energy can generate electricity more cheaply than dirtier sources like coal.

“China has reduced coal use for three years in a row and recently scrapped plans to build more than 100 coal power plants.  Indian officials have estimated that country might no longer need to build new coal plants beyond those already under construction….There are of course formidable challenges….Still, Beijing and New Delhi – not embarrassingly enough, Washington – are showing the way forward.”

By withdrawing from the Paris agreement and through his reversal of Obama’s climate change policies, President Trump has taken the US and the world many big steps backwards in the global fight against global warming.  It will take some time for the rest of the world to figure out how to carry on the race without or despite the US.  Hopefully the absence of the US will only be for a few years.