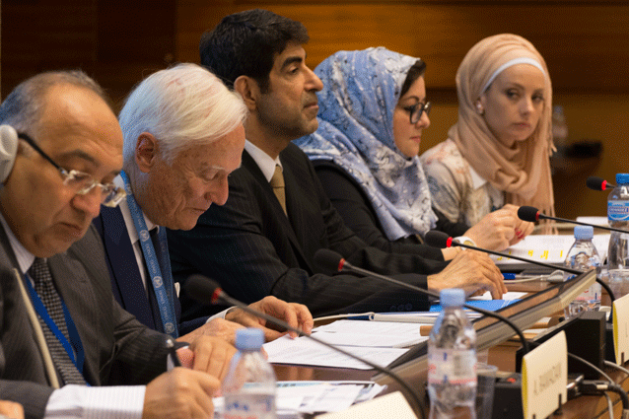 From left to right, H. E. Mr. Amr Ramadan, Ambassador of the Arab Republic of Egypt ; Ambassador Idriss Jazairy, Executive Director of the Geneva Centre, H. E. Dr. Hanif Al Qassim, Chairman of the Board of Management of the Geneva Centre, H. E. Ms. Hoda Al-Helaissi, Member of Saudi Arabia's Shura Council and Dr. Susan Carland, Director of Monash University's Bachelor of Global Studies in Australia, during the panel discussion on “Women’s rights in the Arab world: between myth and reality” organized by the Geneva Centre for Human Rights Advancement and Global Dialogue on 15 September 2017, at the UN Geneva.

GENEVA, Sep 29 2017 (IPS) - Women’s empowerment and gender equality should remain a central objective of the world community. The recently adopted Sustainable Development Goals (SDGs) includes specific provisions to member States of the United Nations – notably through SDG 5 – to commit to enhancing gender equality and to give women a stronger voice in the fight for equality. The Preamble of the 1948 Universal Declaration of Human Rights calls for “equal rights” to be enjoyed by “men and women”: 69 years later, gender equality has not only been recognised for what it is: a fundamental human right, it is also becoming a guiding principle in the efforts of States to attain the highest ideals of a just and inclusive society and the highest rate of growth.

No society in the world can claim to have a society exempt from discrimination against women and girls. All regions of the world face their specific challenges related to the promotion and advancement of women’s rights. In the Arab region as in the West, the enhancement of the social status of women is of high importance. The barriers and the challenges which stand in the way of making impeding gender equality a reality cannot be seen as attributable solely to one region; charting a more inclusive agenda to enhance gender equality requires all regions to identify a suitable framework responding to its specific needs.

Amidst growing instability and social unrest as currently witnessed in the Middle East and North Africa region, encouraging developments are taking place in the Arab region. Tunisia, Lebanon and Jordan have recently decided to repeal discriminatory laws enabling rape perpetrators to escape justice if they would opt for marrying their female victims. Tunisia has just initiated ground-breaking measures in favour of women. In the national parliaments of Algeria, Tunisia and Iraq, women occupy more than 20% of the proportion of seats for parliamentarians. The United Arab Emirates and Egypt have likewise introduced legislation enabling women to benefit from equal rights and opportunities as their male compatriots. Other countries in the Arab region have likewise taken similar initiatives to advance the status of women. These developments show that the promotion and the enhancement of women’s rights in the Arab region have gained strong social acceptance within Arab societies.

Despite these encouraging signs, misperceptions and stereotyping of Arab women have become prolific news sources for mainstream media in depicting and offering a misleading picture of Arab women. The rise of extremism, Islamophobia and right-wing populism have further contributed to exacerbate the popular stereotyping of women as weak and voiceless. Societies as a whole are held further “guilty” for the alleged failures of Arab countries in advancing women’s rights. Hence the need to correct “orientalist” misperceptions.

The relations between Islam and women’s rights have also been the subject of widespread debate among women’s rights experts. Some people lacking perceptiveness consider that Islam is incompatible with women’s rights and gender equality, and that Islamic principles are hostile and discriminatory towards women. Generating simplistic solutions to challenges deriving from societal and cultural challenges – with no root in the teachings of Islam – will not solve “the mystery of Islam as a hostile religion to women.” We need to ask Arab women themselves whether they consider Islam as an emancipating factor in their efforts to achieve gender equality. According to the findings of the book “Fighting Hislam: Women, Faith and Sexism” written by Dr. Susan Carland in 2017, Arab women do not see Islam as an obstacle to fight sexism, discrimination and marginalization of women. Indeed Islam’s egalitarian spirit guides women in their efforts and commitments to advance their own rights. The fact that Islam has played an important role in redefining women’s rights in modern societies is hardly given any recognition in mainstream media. This shows that we have an uphill task ahead of us.

The deconstruction of existing myths regarding the status of Arab women will enable decision-makers and women’s rights experts to identify a common agenda to promote gender equality at a global level. It will enable women’s rights experts from the Arab region and the West to shift from “naming and shaming” and proclamations of moral superiority to the enhancement of women’s rights through constructive dialogue and the identification of joint solutions. Advancing the status of women requires a unified attempt by the Arab region and the West to safeguard women’s rights from adverse policies impeding the realization of gender equality. This idea was explored during the “Women’s rights in the Arab region: between myth and reality” panel debate held on 15 September at the United Nations Office in Geneva. Now is the time to join forces and work together to make this a reality.