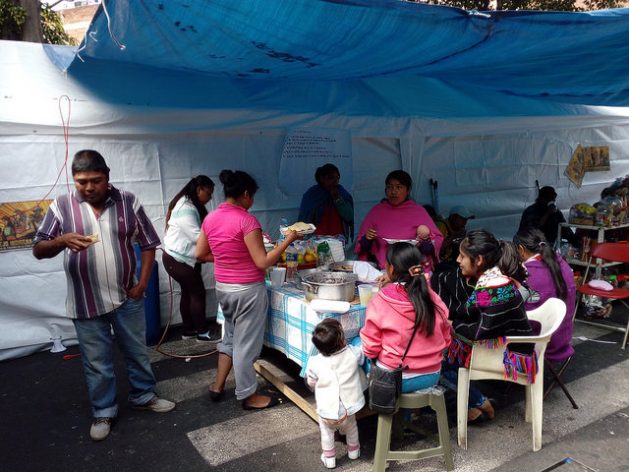 A community of 35 Nahñú indigenous families, from the central state of Querétaro, set up a camp in front of the old building that they occupied in the center of Mexico City, which was heavily damaged by the Sept. 19 earthquake. In the photo can be seen the tent that serves as their kitchen and dining room. Credit: Emilio Godoy / IPS

MEXICO CITY, Sep 27 2017 (IPS) - Maricela Fernández, an indigenous woman from the Ñañhú or Otomí people, shows the damages that the Sept. 19 earthquake inflicted on the old house where 10 families of her people were living as squatters, in a neighbourhood in the center-west of Mexico City.

The magnitude 7.1 quake, mainly felt in Mexico City and the neighboring states of Mexico, Morelos and Puebla, caused structural damage to the building, which like many other buildings in the city is in danger of collapsing.

The two-storey building, inhabited by indigenous families since 2007, had already been damaged by the 8.0 magnitude earthquake that claimed at least 10,000 lives on September 19, 1985 in the Mexican capital, exactly 32 years before the one that hit the city a week ago.

"These are families who, because of their condition, have long occupied spaces in deplorable conditions, squatting for example on properties condemned since the 1985 earthquake…The recent earthquake left the properties uninhabitable. Authorities have told them that they cannot live in those buildings anymore.” -- Alicia Vargas

Since Sept. 19 “we have been sleeping outside, because the house is badly damaged and may collapse. We do not want to go to a shelter, because they could take the building away from us,” explained Fernández, a mother of two who works as an informal vendor.

The residents of the house, including 16 children, set up a tent on the sidewalk, where they take shelter, cook and sleep while looking after their battered house and belongings inside.

Fernández, a member of the non-governmental “Hadi” (hello in the Ñahñú language) Otomí Indigenous Community, told IPS that humanitarian aid received so far came from non-governmental organisations and individual citizens.

But she criticised what she described as disregard from the authorities towards them and the discrimination exhibited by some neighbors.

“It is unfair that they discriminate against us for being indigenous and poor. Nobody deserves that treatment,” she said.

The earthquake had a death toll of at least 331 people – mostly in Mexico City – while at least 33 buildings collapsed and another 3,800 were partially or totally damaged.

Most schools resumed classes on Monday Sept. 25, as did economic activity and administrative work, but thousands of students and employees are reluctant to return to their educational institutions and workplaces until they have guarantees that the buildings are safe.

A similar situation is faced by another Ñahñú community living in a different rundown, abandoned building in a neighborhood in the centre of the capital, which has a population of nearly nine million people and which exceeds 21 million when adding the greater metropolitan area.

After the earthquake they set up a camp in the street next to the building that is damaged but still standing, where they sleep, cook and eat. Their refusal to move to a shelter is due to the fear of eviction and the loss of their home and belongings. 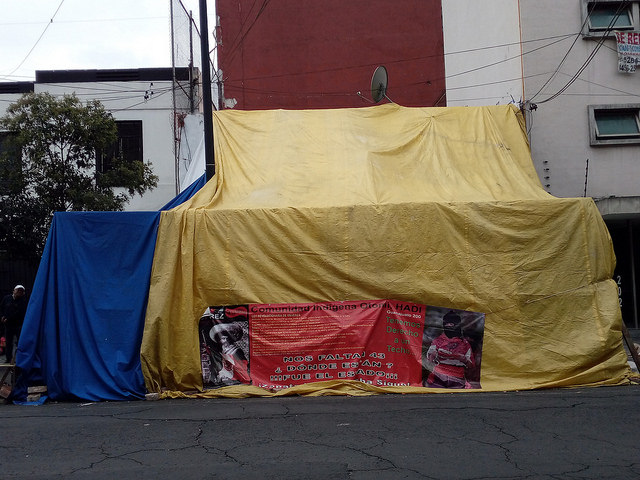 The 10 Nahñús families who were living in an old house in Mexico City since 2007 are now living outside the building due to the structural damages caused by the Sept. 19 earthquake. They are staying there in order to protect their property and belongings and to demand support for access to housing. Credit: Emilio Godoy / IPS

“We have organised ourselves to prepare food and watch over our things. The government has not taken care of us. They always ignore indigenous people,” complained Telésforo Francisco Martínez, a member of the group of 35 families who inhabit the property.

The whiteness of three large tents and a smaller one contrasts with the black canvas that protects the entrance to the building. Two camping tents complete the makeshift camp, together with two campfires and a few small tables.

These indigenous people work in the informal sector, selling traditional crafts and art, cleaning cars on the streets or cleaning houses.

“We have not been able to work, so we have no income,” said Martínez, who cleans car windshields on the streets.

Since 1986, some 2,000 Ñahñú natives have migrated to Mexico City from the municipality of Santiago Mezquititlán in the central state of Querétaro, and they now live in eight shantytowns in neighborhoods in the center-west of the capital.

Mexico City attracts thousands of people from other parts of the country who leave their towns to seek an income in the informal economy and often live in slums on the outskirts of the city.

About 1.2 million indigenous people live in the capital, according to data from the non-governmental Interdisciplinary Center for Social Development (Cides).

“These are families who, because of their condition, have long occupied spaces in deplorable conditions, squatting for example on properties condemned since the 1985 earthquake,” Cides director Alicia Vargas told IPS.

“The recent earthquake left the properties uninhabitable. Authorities have told them that they cannot live in those buildings anymore,” she said.

For Vargas, whose organisation works with these minorities, these groups have been “traditionally invisible, especially children” and their level of vulnerability is exacerbated by disasters and the exclusion and discrimination they suffer. 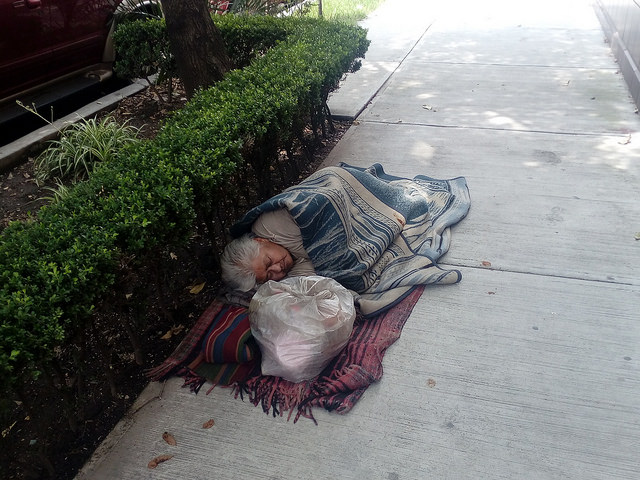 The Sept. 19 earthquake exacerbated the needs of vulnerable groups living in Mexico City, including the homeless, such as this woman sleeping on a sidewalk on the south side of the capital. Authorities have diverted assistance for the homeless to earthquake victims. Credit: Emilio Godoy / IPS

“The State’s response is to come and assess the properties and evict them, leaving them on the streets, with nothing. They have not offered them any alternative. There is no official response from any government housing body to temporarily resolve their situation,” the activist complained.

The homeless, forgotten as always

The homeless have also suffered from the earthquake, which has exacerbated their extreme poverty.

“It’s the same as with historically excluded groups: in times of disaster, they always do worse. The disaster is so severe that no one remembers these groups. On the street they are more on their own than ever,” the director of the non-governmental organisation El Caracol, Luis Hernández, told IPS.

After the earthquake, squads of 25 community workers with El Caracol, which works with street people, visited groups at risk in different Mexico City neighbourhoods.

The monitoring found that they had received food, but the services they traditionally have access to – such as preventive health care – are now unavailable to them, as these services have been reoriented to care for those affected by the deadly earthquake.

“That neglect exacerbates their vulnerability. No governmental or private institution has approached them to provide assistance. They have remained on the streets and have not been evacuated or taken to shelters,” said Hernández, who noted that many homeless people participated in the efforts to rescue people trapped in damaged buildings.

In Mexico City, 6,774 people are homeless and of these, 4,354 stay in public spaces, and 2,400 in public and private shelters, according to the Census of Homeless People in August, carried out by the Ministry of Social Development.

Of the homeless, 5,912 are men and 862 are women. The majority are between the ages of 18 and 49 and nearly 40 percent have come from other states seeking work.

IPS found at least four people on the street who had received no kind of assistance, and were wandering about without being aware of where they were or what had happened.

In recent years, organisations such as El Caracol have denounced violations of the rights of the homeless, such as eviction from bridges and avenues, without offering them alternative shelter.

Fernández and Martínez just want a decent place to live. “We want to live here…we want them to tear the house down and build housing,” said Fernandez.

Martínez, for his part, complained about the slow process of regularisation of ownership of the property. “We have already completed it and they have not given us an answer. We don’t want anything for free, we just want to be taken into account,” he said.

For Vargas, the cleaning of debris, the installation of temporary housing, the provision of basic services and a safe space for about 100 children are urgent needs.

“Perhaps given this situation they can have access to social housing. In the medium-term, what is necessary is the immediate resolution of the definition of land to build housing for these families, with accessible credits. The indigenous population are in the areas of highest risk in the city, with the worst overcrowding,” he said.

Hernández proposed developing protection policies during emergencies. “What we are worried about is that they could be evicted from their areas, unless it is due to safety issues caused by collapses or demolitions,” he said.