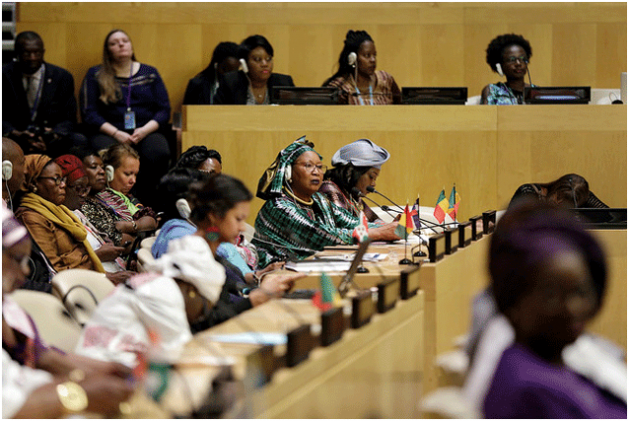 UNITED NATIONS, Oct 16 2017 (IPS) - Once in a while, Africa produces talented women politicians who, despite the odds, overcome the obstacles that impede their success in the political arena.

For most African women, however, the political terrain is too rough to navigate. Few make the journey, perceiving that their male colleagues would try to undermine them. In their effort to take up leadership positions, qualified African women can expect to confront gender-based attacks, including being labelled “prostitutes” or “concubines”. Sometimes they are sexually harassed, and they often contend with men seeking sexual favours as preconditions for support.

Propositions from senior male office holders as a precondition for entry into the field are unacceptable, says former Nigerian senator Uche Lilian Ekwunife. She adds that this is a tactic men have used for years to discourage women from entering the political fray.

Ms. Ekwunife recollects her 2011 re-election campaign for Nigeria’s House of Representatives, when her opponent superimposed her head on a naked body and sent the picture to YouTube “just to demean my person.” Luckily, that childish slur backfired, and Ms. Ekwunife easily won the election to the legislative body.

Four years later, when she sought election to the senate in 2015, her experience was less pleasant. Although she was re-elected to become one of six women out of the 109 senators in Nigeria’s upper law-making body, her political journey was short.

The courts nullified her election after she had been in the senate only six months. She believes that her election’s nullification was politically motivated, even though there was the issue of her switching political parties at the last minute.

Ms. Ekwunife’s experience is not unique among women political hopefuls in Africa. For example, just two days after activist Diane Shima Rwigara declared her intention to run for the presidency in Rwanda’s general election in August this year, social media was awash with purported nude pictures of her. Her candidacy was disqualified by election officials.

In neighbouring Uganda, a member of the opposition Zainab Fatuma Naigaga and some male colleagues were arrested on their way to a political rally in October 2015. But it was only Ms. Naigaga who was stripped naked by abusive police officers, while the men were left alone.

In Kenya, MP Millie Odhiambo Mabona was analysing the country’s Security Laws (Amendment) Bill 2014 in Parliament when a commotion on the floor degenerated into a free-for-all brawl.

Ms. Mabona says she was assaulted by two pro-government MPs. “That day I was in a dress and these men kept pulling it up while I pulled it down. They went ahead and tore my panties,” Ms. Mabona told Africa Renewal in an interview.

One of the accused male MPs was quoted in the local dailies, saying, “I slapped her because she wanted to assault the deputy speaker. That was great disrespect.” The MPs later passed the bill on security laws.

Women facing sexual harassment must call the men’s bluff, says Ms. Mabona. “If they threaten me with exposing my sexual encounters, I tell them I would also expose those that I went out with.” Ms. Ekwunife, taking a different tack, says “women need to focus and ignore these distractions.”

Besides issues relating to their bodies and their private lives, African female politicians, most of the time, begin their career in politics later in life, and start from a position of disadvantage of having to balance family and work. They also tend to have less money than their male counterparts to spend on campaign expenses.

Shauna Shames of New Jersey’s Rutgers University-Camden, writing about “Barriers and solutions to increasing women’s political power,” notes that “when money dominates politics, women lose out. With women having persistently lower incomes for many reasons, they are far less likely than men to be in the social and business networks that pour money into political campaigns.”

Major political parties rarely nominate women for elected positions during primaries because of the belief that women stand a slim chance of winning against men. In Kenya, for example, all the leading parties nominated men as presidential candidates for the August 2017 elections.

Sometimes a political party will attempt to curry favour by nominating women, yet will not fully back the female politicians to win elections, explains Ms. Ekwunife.

Women candidates are more vulnerable than their male counterparts to electoral violence, including physical attacks on the candidates themselves, their families or supporters, from the campaigns to election time, says Ms. Mabona.

The Kenyan government pledged to enhance security for women aspirants in the lead-up to the August 2017 general election. The cabinet secretary for interior security, the late Joseph Nkaissery, in June announced the government’s intention to protect women candidates, but also told them to be “tough,” without explaining what he meant, leaving pundits to infer a tacit approval for women to be violent.

Ms. Mabona herself witnessed raw violence early this year during her political party’s fiery primaries in her Mbita Constituency in western Kenya. Her bodyguard was killed and her house was burned down.

Will the ground be level anytime soon for women politicians in Africa? Dismas Mokua, a political analyst with Trintari International, a Nairobi-based public relations firm, says women in Africa have made some impact in politics but could do better. Most societies are patriarchal and don’t expect women to take up leadership positions, explains Mr. Mokua.

“Running for a public office requires resources. A lot of women candidates may not have the requisite finances,” says Mr. Mokua. Against all odds, the time is now for Africa’s visionary female politicians to join politics and change the narrative.