Dr Doaa Abdel-Motaal is the Executive Director of The Rockefeller Foundation Economic Council on Planetary Health at the Oxford Martin School. Doaa is the author of the recently published book, Antarctica: The Battle for the Seventh Continent. 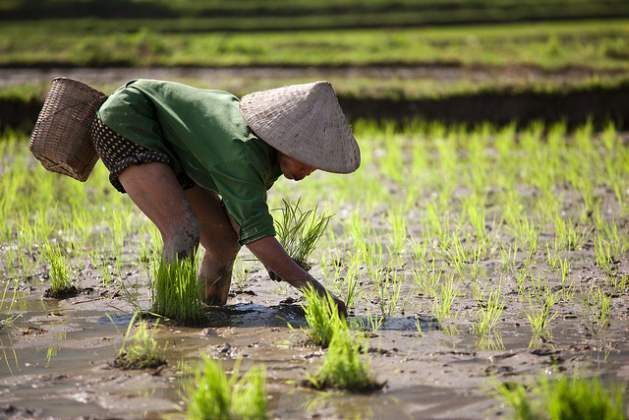 OXFORD, United Kingdom, Oct 13 2017 (IPS) - Milk and cookies, macaroni and cheese, fish and chips. Some foods seem to match perfectly together to the point where one can’t go without the other. Food and health, while maybe not as catchy, should be viewed in the same light. Without good food it is hard to maintain good health; without good food growing practices it is difficult to maintain a healthy planet.

It is hard to believe that in 2017, with all the advancements made in agriculture and the food industry, many people around the world still do not have enough to eat. This is a tragedy. There is more than enough food produced to feed everyone, yet according to the UN’s Food and Agriculture Organization, more than 800 million people suffer from hunger and more than 2 billion from micronutrient deficiencies.

This will only get worse as the world population is expected to reach over 9 billion by 2050. Conflict, and with it the displacement and migration of people, further compound the food security and nutrition equation. In 2017 alone a number of crises have made millions worldwide severely food insecure.

On the flip side, there are many people going to bed too full across the globe: an estimated 40% of adults and millions of children worldwide are overweight.

We are witnessing an overconsumption of food often coupled with a lower nutritional quality. This is having a major impact on obesity, heart disease and other issues, and is no doubt adding to the looming heath crisis. Obesity tends to affect poorer populations more, suggesting that the issue is not only the availability of food, but the type of food available.

It is becoming increasingly clear that food systems, and diets, are not sustainable. What is urgently needed is a holistic approach to address food and health as well as sustainability along the entire food chain
We are also losing many of the traditional diets found throughout the world in favour of less sustainable diets. Developing countries are moving away from traditional diets high in cereal, green vegetables and fiber to more Western style diets that are high in sugars, fat and animal-source food. This is not only bad for human health, but potentially catastrophic for the environment.

A look at livestock alone and its contribution to climate change demonstrates this point. According to the FAO, the sector emits 7 gigatons of CO2 equivalent every year, representing around 14 percent of all human-induced emissions. Planetary boundaries may well be surpassed if current trends continue. Also, it takes ten times more water and twenty times more energy to produce one kilogram of wheat as it does to produce the same weight of beef, and at present three quarters of the world’s wheat is grown to feed livestock.

And while certain agricultural practices contribute to climate change, climate change is also likely to have a serious impact on our food security. Climate models indicate that while rising temperatures may have a beneficial effect on crops in temperate areas, tropical areas may experience a significant reduction in their crop productivity in the long term.

Equally serious will be the impact of climate change on the nutritional content of key crops which could put hundreds of millions of people at risk of vitamin deficiencies. Studies show that higher CO2 levels significantly reduce the levels of the essential nutrients iron and zinc, as well as protein, in such staple crops as wheat, rice, maize and soybeans.

While these crops are relatively low in iron and zinc compared to meat, in poorer societies where meat is not consumed as much as in wealthier nations, they remain a major source of the nutrients needed for children to grow and to develop.

And then there is the waste. Roughly one-third of the food produced in the world for human consumption every year — approximately 1.3 billion tons — gets lost or wasted, with fruits and vegetables having the highest wastage rates of any food, says the FAO. This waste amounts to roughly $680 billion in industrialized countries and $310 billion in developing countries. If we are going to meeting Goal 12 of the UN Sustainable Development Goals – to reduce global food waste in half by 2030 –  much more needs to be done. Roughly one-third of the food produced in the world for human consumption every year — approximately 1.3 billion tons — gets lost or wasted, with fruits and vegetables having the highest wastage rates of any food. Credit: Catherine Wilson/IPS

This World Food Day, we have to acknowledge the multiple problems that exist within our food systems and that nutritional problems are escalating. It is becoming increasingly clear that food systems, and diets, are not sustainable. What is urgently needed is a holistic approach to address food and health as well as sustainability along the entire food chain.  Awareness raising on what a healthy diet means is also key.

Through the newly established Rockefeller Foundation Economic Council on Planetary Health at the Oxford Martin School, we will continue to find solutions to health risks posed by poor stewardship of the planet. In an era of global environmental change, the food-health connection must be made central to any such investigation.

Over the next 18 months, the Economic Council – made up of world leaders from government, international organizations, civil society, business, finance and academia – will bridge knowledge gaps on the links between economic development, natural systems and human health to compel collaboration across disciplines and coordinated action to address the complex challenges of the 21st century.  A century where the food and health connection will need to be viewed inseparably, like an order of fish and chips.