In Defense of Uganda’s Imprisoned Journalists 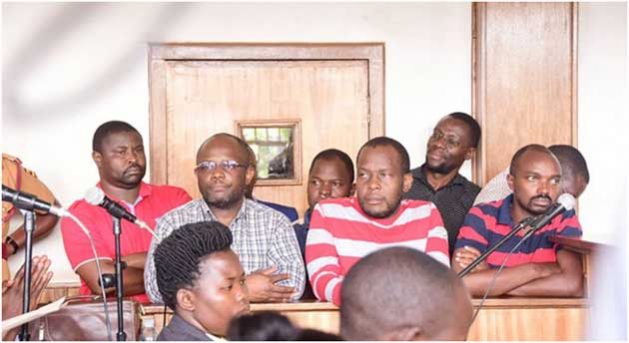 DURBAN, South Africa, Dec 14 2017 (IPS) - The Committee to Protect Journalists (CPJ) has included eight staffers of the controversial Ugandan tabloid Red Pepper in its 2017 global census of imprisoned journalists. Some may disagree with that decision.

After all, Red Pepper arguably endangered the lives of LGBTQ Ugandans by splashing the names of “200 top homos” across its pages back in 2014 when President Yoweri Museveni toughened criminal penalties for gays.

Outside of the country some accused the daily of hate speech but at home the government of course said nothing.

Now the tables are turned. Museveni’s authoritarian administration has cracked down hard on Red Pepper for republishing a story by a Rwandan outlet alleging a Ugandan plot to overthrow Rwanda’s President Paul Kagame.

Red Pepper‘s critics may view the arrests and prosecution of the eight journalists as poetic justice but that misses the bigger point. The Ugandan media is under tremendous and continuous pressure from an administration that attempts to silence critical and independent voices, and this crackdown is yet another attempt to intimidate the press.

That is why we, the World Association of Newspapers local media and press freedom organizations, as well as competitors and commentators, among others, have condemned the Red Pepper raid.

As the country’s Africa Centre for Media Excellence (ACME) has stated: “Our defense of the tabloid is not to endorse its approach to journalism, but rather to highlight what Uganda’s Supreme Court has called ‘the greater danger of smothering alternative views of fact and opinion”.

“Those who are celebrating the silencing of Red Pepper should remember that some of the offences preferred against the directors and editors, such as ‘offensive communication’, are as much a threat to ordinary Ugandans …. If these charges are allowed to stand against Red Pepper, we shall be in trouble because they can easily be preferred and allowed to stand against any of us,” said ACME executive director, Peter Mwesige.

Police accused Red Pepper of publishing information prejudicial to “national security” in its November 20 edition. It reproduced an article by a Rwandan online publication Rushyashya under the headline ” M7 plotting to overthrow Kagame“. M7 is a nickname for Museveni who has ruled Uganda for 31 years.

The original charge of treason was dropped, but the journalists face seven other counts, including offensive communication, libel and disturbing the peace of Museveni, his brother Gen. Salim Saleh and Security Minister Henry Tumukunde.

The police’s anti-terrorism unit raided the offices and some editors’ homes; arrested management and senior staff; confiscated their tools of the trade, including computers and cellphones forced staff to hand over their passwords, sealed the office premises and declared it a crime scene.

More than three weeks after the arrests, Red Pepper has not been allowed to resume publishing, its staff, including those who were not charged, cannot earn a living and the company is unable to conduct business and pay the bills. The eight also remain in jail.

The effect of the State’s sledgehammer approach is felt beyond Red Pepper and is widely regarded as a tool to intimidate other journalists into self-censorship and to toe the government line, according to editors interviewed by CPJ, as well statements by media freedom organisations, cited above.

Haruna Kanaabi, the executive secretary of the Independent Media Council of Uganda, told CPJ: “What they (the authorities) did was to take the hammer to beat the mosquito.”

The Daily Monitor’s executive editor Charles Bichachi, said the “state seems to be using the detention to intimidate them, to harass them, and send a message to the rest of the media”.

“That is why we should speak out …because if the government gets away with holding Red Pepper editors, they will come for the rest,” he told CPJ.

However, Information Minister Frank Tumwebaze does not believe that the arrests are a threat to media freedom.

“When people have been charged in courts of law then it means that the state has given them an opportunity to get justice and defend themselves. Nobody is above the law, whether a journalist or any other citizen,” Tumwebaze told CPJ.

The State’s apparent bullying tactics appears to be succeeding. The Observer reported on December 7 that the management of Top Radio & TV had banned opposition politicians & other voices critical of government from all its shows.

Police have also recently summoned editors of the Monitor publications and New Vision and interrogated them about articles they published.

It is clear that Uganda’s media, not only Red Pepper, is under siege and ordinary Ugandans are the poorer for it.