Libya: Up to One Million Enslaved Migrants, Victims of ‘Europe’s Complicity’ 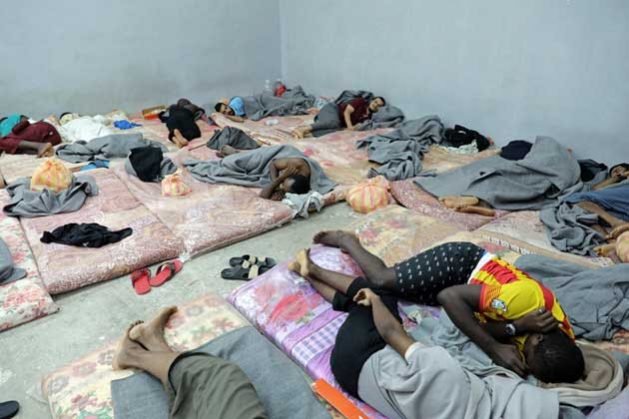 In Libya, dozens of migrants sleep alongside one another in a cramped cell in Tripoli's Tariq al-Sikka detention facility. Credit: UNHCR/Iason Foounten

ROME, Dec 13 2017 (IPS) - “European governments are knowingly complicit in the torture and abuse of tens of thousands of refugees and migrants detained by Libyan immigration authorities in appalling conditions in Libya,” Amnesty International charged in the wake of global outrage over the sale of migrants in Libya.

In its new report, ‘Libya’s dark web of collusion’, Amnesty International (AI) details how European governments are actively supporting a sophisticated system of abuse and exploitation of refugees and migrants by the Libyan Coast Guard, detention authorities and smugglers in order to prevent people from crossing the Mediterranean.

The Geneva-based UN International Organisation for Migration (IOM) estimates that the number of migrants trapped in Libya could amount to up to one million, and it is now rushing to rescue the first 15,000 victims through a massive repatriation emergency plan. A major airlift is underway as IOM starts flying 15,000 more migrants from Libya before year end.

“European governments have not just been fully aware of these abuses... they are complicit in them” -- John Dalhuisen, Amnesty International

“Hundreds of thousands of refugees and migrants trapped in Libya are at the mercy of Libyan authorities, militias, armed groups and smugglers often working seamlessly together for financial gain. Tens of thousands are kept indefinitely in overcrowded detention centres where they are subjected to systematic abuse,” said John Dalhuisen, AI’s Europe Director, on Dec 12.

“European governments have not just been fully aware of these abuses; by actively supporting the Libyan authorities in stopping sea crossings and containing people in Libya, they are complicit in these abuses,” Dalhuisen affirmed.

“By supporting Libyan authorities in trapping people in Libya, without requiring the Libyan authorities to tackle the endemic abuse of refugees and migrants or to even recognise that refugees exist, said Dalhuisen, European governments have shown where their true priorities lie: namely the closure of the central Mediterranean route, with scant regard to the suffering caused.

AI’s revelation of such collusion between the European Union and Libya comes amidst a worldwide wave of denunciations against the measure adopted in 2016 by the EU member states –particularly Italy—aiming at closing off the migratory route through Libya and across the central Mediterranean.

These measures have been implemented with little care for the consequences for those trapped within Libya’s lawless borders, AI said, adding that Europe’s cooperation with Libyan actors has taken the following three-pronged approach:

Firstly, they have committed to providing technical support and assistance to the Libyan Department for Combatting Illegal Migration, which runs the detention centres where refugees and migrants are arbitrarily and indefinitely held and routinely exposed to serious human rights violations including torture.

Secondly, they have enabled the Libyan Coast Guard to intercept people at sea, by providing them with training, equipment, including boats, and technical and other assistance.

Thirdly, they have struck deals with Libyan local authorities and the leaders of tribes and armed groups – to encourage them to stop the smuggling of people and to increase border controls in the south of the country. 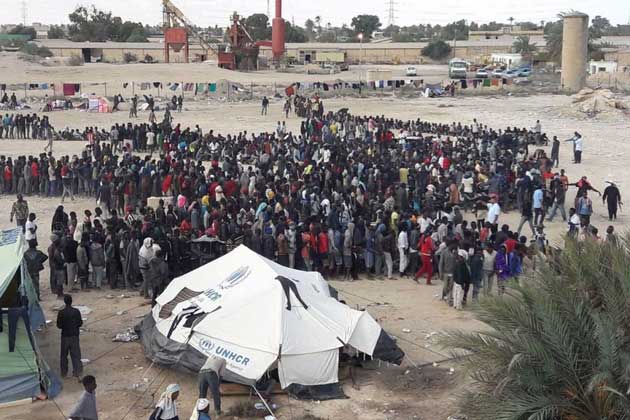 UNHCR teams in Libya have been responding to the urgent humanitarian needs in and around Sabratha, a city located some 80 kilometres west of the Libyan capital, Tripoli. Credit: UNHCR

Meanwhile, after shocking images showing an auction of people were captured on video, UN human rights experts have urged the government of Libya to take immediate action to end the country’s trade in enslaved people.

“We were extremely disturbed to see the images which show migrants being auctioned as merchandise, and the evidence of markets in enslaved Africans which has since been gathered,” the UN human rights experts said in a joint statement.

It is now clear that slavery is an “outrageous reality” in Libya, they affirmed, adding that the auctions are reminiscent of “one of the darkest chapters in human history, when millions of Africans were uprooted, enslaved, trafficked and auctioned to the highest bidder.”

The UN human rights experts also warned that migrants in Libya are “at high risk of multiple grave violations of their human rights, such as slavery, forced labour, trafficking, arbitrary and indefinite detention, exploitation and extortion, rape, torture and even being killed.”

“The enslavement of migrants derives from the situation of extreme vulnerability in which they find themselves. It is paramount that the government of Libya acts now to stop the human rights situation deteriorating further, and to bring about urgent improvements in the protection of migrants.”

The UN member states must “stop ignoring the unimaginable horrors endured by migrants in Libya, must urge countries to suspend any measures,” they urged.

AI, a global movement of more than 7 million people in over 150 countries campaigning to end human rights abuses, has also warned that the criminalisation of irregular entry under Libyan law, coupled with the absence of any legislation or practical infrastructure for the protection of asylum seekers and victims of trafficking, has resulted in “mass, arbitrary and indefinite detention becoming the primary migration management system in the country.” 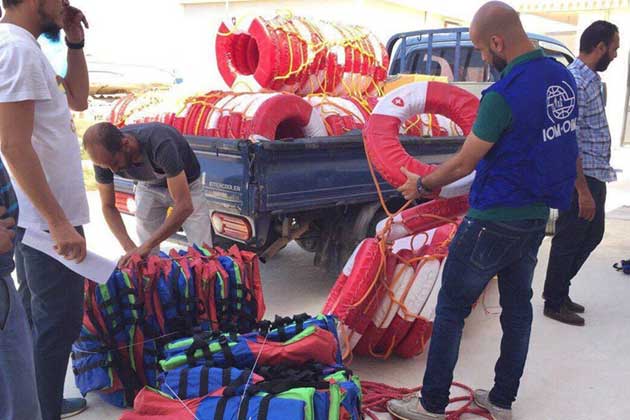 Refugees and migrants intercepted by the Libyan Coast Guard are sent to detention centres where they endure “horrific treatment,” AI warned.

Up to 20,000 people currently remain contained in these overcrowded, unsanitary detention centres. Migrants and refugees interviewed by Amnesty International described abuse they had been subjected to or they had witnessed, including arbitrary detention, torture, forced labour, extortion, and unlawful killings, at the hands of the authorities, traffickers, armed groups and militias alike.

Dozens of migrants and refugees interviewed described the “soul-destroying cycle of exploitation” to which collusion between guards, smugglers and the Libyan Coast Guard consigns them. Guards at the detention centres torture them to extort money, AI informs.

“If they are able to pay they are released. They can also be passed onto smugglers who can secure their departure from Libya in cooperation with the Libyan Coast Guard. Agreements between the Libyan Coast Guard and smugglers are signalled by markings on boats that allow the boats to pass through Libyan waters without interception, and the Coast Guard has also been known to escort boats out to international waters.”

Libyan Coast Guard officials are known to operate in collusion with smuggling networks and have used threats and violence against refugees and migrants on board boats in distress, AI has denounced.

In the wake of “shocking reports about rampant migrant abuse and squalid and overcrowded conditions across multiple detention centers” in Libya, talks at the AU-EU Summit led to a major stepping up of measures to tackle smuggling and mistreatment of migrants on the central Mediterranean migration route, which claimed 2,803 migrant lives to drowning this year alone, IOM on 1 December informed.

IOM is now rapidly scaling up its voluntary humanitarian return programme, which has brought more than 14,007 migrants back to their home countries so far in 2017.

A large-scale airlift is already underway in which IOM expects to take a further 15,000 migrants home from detention in Libya by end of the year. The establishment of a planned joint task force with all concerned parties is aimed at ensuring that the migration crisis in Libya is dealt with in a coordinated way.

“Scaling up our return programme may not serve to fully address the plight of migrants in Libya, but it is our duty to take migrants out of detention centers as a matter of absolute priority,” IOM director general Swing said.

He added that IOM intends to work with all UN partners and ensure proper coordination and prompt referral of any persons for whom return may not be suitable. These initiatives come following the IOM director general’s discussions with African Union Commission Chairperson Moussa Faki Mahamat, as well as with EU High Representative for Foreign Policy Federica Mogherini and UN Secretary General.

Addressing the UN Security Council, Secretary-General António Guterres highlights the need for global solidarity to tackle the security challenges in the Mediterranean.

Up to One Million Migrants Trapped in Libya

To date IOM has registered more than 400,000 migrants in Libya, and it estimates their number to be more than 700,000 to 1 million. The scaling up of the assistance will also include migrants wishing to go back home but who are not in detention centers.

“Large numbers of migrants are held in overcrowded detention centers, in conditions that fall far short of basic and humane standards. A large number of those migrants have expressed a wish to return to their countries of origin and IOM is now scaling up its air operations out of Libya to assist those men, women and children who may wish to return home.”

IOM’s initial effort will focus on 15,000 migrants, which it aims to help return and reintegrate in countries of origin before the end of the year. “This is a choice people make voluntarily, hoping for a new start at home,” said Othman Belbeisi, IOM’s chief of Mission in Libya.