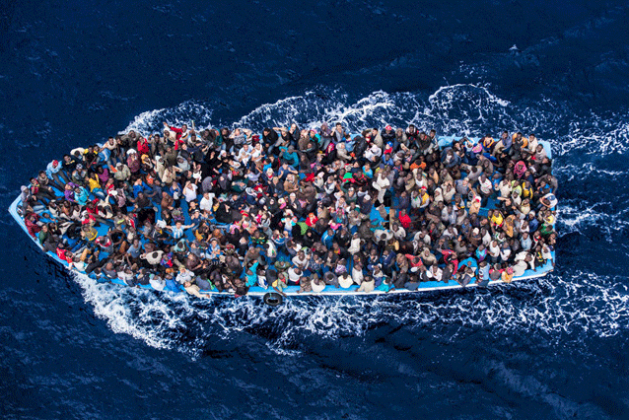 Hundreds of refugees and migrants aboard a fishing boat moments before being rescued by the Italian Navy as part of their Mare Nostrum operation in June 2014. Credit: The Italian Coastguard/Massimo Sestini

SUVA Fiji, Dec 6 2017 (IPS) - Continuing his “America First” approach, President Donald Trump has pulled the U.S. out of a proposed United Nations global compact seeking an agreement to protect the safety and rights of migrants and refugees.

CIVICUS, the alliance for citizen participation, reacted strongly against the American disengagement, while proposing a Declaration of its own: Climate Induced Displacement. (CID)

The declaration was proposed at the International Civil Society Week (ICSW) in Suva, Fiji’s capital
at a global conference, with more than 700 participants from 109 countries, discussing topics ranging from human rights to global warming. The weeklong conference is scheduled to conclude December 8.

“Whole communities and countries are already being displaced because of changing weather patterns, rising sea levels and more frequent and catastrophic events. But the response at the moment is very ad hoc,” declared Danny Sriskandarajah, CEO of CIVICUS and organiser of the event in Suva.

“Our declaration is saying that we need a principle-based response to climate induced displacement. The key principle is that we have to treat with dignity and respect people who are being displaced through no fault of their own.”

The United Nations has an ambitious plan to create a more humane global strategy on migration. But the Trump administration has pulled out, saying involvement in the process interferes with American sovereignty and runs counter to US immigration policies. President Trump viewed the proposed pact as a threat to national security.

Trump’s decision was disclosed last Saturday by Nikki Haley, the U.S. ambassador to the U.N. “Our decisions on immigration policies must always be made by Americans and Americans alone. We will decide how best to control our borders and who will be allowed to enter our country,” Haley said in a statement.

Sriskandarajah, who is baffled by Trump’s withdrawal, said: “The entire western world believes somehow that you can manage global mobility through short term restrictions. The fact that Donald Trump has pulled out the US of the global compact process is yet another sign that countries are looking for short term, regressive, insular measures on migration.”

“The fact that the US is pulling out is really worrying. Human mobility has happened throughout history. It is going to increase. So we need sensible collaborative ways of managing that mobility,” the CEO of CIVICUS said at the University of the South Pacific in Suva, where ICSW meetings are taking place.

“For those people that already have been displaced by climate change, they are going to be left to the mercy of other countries. That leads to more uncertainty.”

The ‘Global Compact on safe, orderly and regular migration’ is expected to go before the UN General Assembly for approval in September 2018. And ICSW wanted to highlight the importance of this issue. Instead, many activists at ICSW now express their concerns about its potential demise.

Asked about the US withdrawal, UN spokesman Stephane Dujarric told reporters at a news briefing on December 4: “Obviously, it’s a decision that we regret, but I think there’s still plenty of time for US engagement on this issue. But the decision should not disrupt what we see as a clear, unanimous outcome of the New York Declaration for such a Global Compact, which, I should remind you, will be non legally binding and grounded in international cooperation and respectful of national interests”.

“From where we stand, the positive story of migration is clear. It needs to be better told,” Dujarric noted. Equally, he pointed out, the challenges it faces need to be tackled with more determination and greater international cooperation.

“We obviously look forward to the outcome of the discussions of… in Mexico and the start of the more formal discussions in February,” he added.

Asked whether the UN was forewarned, Dujarric said; “ I’m not aware that it’s one we had any warning about.”

Meanwhile, in Puerto Vallarta, Mexico, the Preparatory Meeting for the Global Compact on Migration got underway.

At the opening of the Conference, the Special Representative for International Migration, Louise Arbour, stressed that migration demands a global response.

“The movement of people across borders is, by definition, an international reality,” she said. “There is nothing in that to contradict a state’s sovereign right — subject to international and domestic law — to manage who enters and stays within its borders.”

She added that the success of the global compact will rest on maximum countries’ political and moral buy in and willingness to enhance cooperation at the regional and international levels.