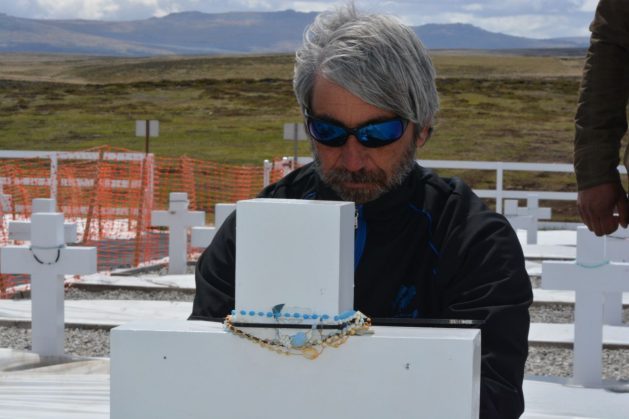 Julio Aro in the Argentine Military Cemetery (or Darwin Cemetery), in Malvinas/Falkland Islands. The former combatant worked since 2008 with the aim of identifying the Argentine soldiers buried on the islands. Credit: Courtesy of Julio Aro

BUENOS AIRES, Jan 4 2018 (IPS) - Julio Aro, a veteran of the 1982 Malvinas/Falklands war, returned to the islands in 2008. When he visited the Argentine Military Cemetery he found 121 tombs that read: “Argentine soldier only known by God”, and he resolved to return their identity to his fellow soldiers. Today he can say that, to a large extent, he has achieved his goal.

More than 35 years after the war between Argentina and Great Britain in the South Atlantic, 88 Argentine families are receiving news that those soldiers who never returned home – their sons, husbands, or brothers – were identified and are buried in the Darwin Cemetery.

“In some cases, the family members are given rings, crucifixes, gloves or other belongings that had been buried with the bodies. It’s very moving,” said Julio Aro in an interview with IPS.

“The families all react differently. Some are happy, some are sad… I met a father who still hoped his son would return from the islands. It has been 35 years of anguish because these people have been subjected to enormous cruelty,” he added.

The process of truth and reparations is expected to be concluded in March or April, when a ceremony will be held on the Malvinas/Falklands islands, with relatives of the fallen, where the names of the previously unidentified soldiers will be placed at each grave.

Increasingly weakened and up against the wall because of revelations of its human rights violations, the 1976-1983 Argentine military dictatorship invaded the Malvinas/Falkland Islands in 1982, in response to a long-standing nationalist aspiration shared even today by a large part of the population of this South American country: to recover the Islands occupied by Great Britain since 1833.

However, the British government of prime minister Margaret Thatcher reacted quickly sending troops to the South Atlantic, and in two months defeated Argentina, which suffered 649 casualties. Britain regained control of the islands, which aggravated the crisis facing the Argentine military government and paved the way for the country to return to democracy the following year.

The initiative to try to heal the wound that remained open for many families began in December 2016 with an agreement between Argentina and Great Britain, which gave rise to the so-called Humanitarian Project Plan (PPH).

The International Committee of the Red Cross (ICRC) was entrusted to identify the Argentine soldiers buried in anonymous graves in the Malvinas/Falklands.

In June 2017, after a long period of interviews and collecting DNA samples from 107 relatives who had never recovered their loved ones, a team of 14 forensic experts from Argentina, Australia, Chile, Great Britain, Mexico and Spain disembarked in the Malvinas/Falklands. Luis Fondebrider and Mercedes Doretti belong to the prestigious Argentine Forensic Anthropology Team (EAAF), who together with forensic experts from other countries managed to identify 88 Argentine soldiers buried in the Malvinas/Falklands islands, 35 years after the war. Credit: Daniel Gutman / IPS

For seven weeks, in the middle of the cold Southern hemisphere winter on the islands, the experts worked at the cemetery, exhuming 122 corpses (there were 121 graves, but one of them held two bodies), taking DNA samples at a morgue temporarily fitted out with hi-tech equipment, placing the remains in new coffins and burying them again in the same graves.

The genetic analysis of the samples and the comparison with the ones taken from the relatives were later carried out in the laboratory of the Argentine Forensic Anthropology Team (EAAF) in Córdoba, whose forensic experts participated in the whole process. In parallel, two other laboratories from Great Britain and Spain carried out a cross-comparison and confirmed the results.

The EAAF is a prestigious multidisciplinary team created in 1984 to identify the remains of victims of forced disappearance killed by Argentina’s military dictatorship.

Since then, the EAAF has been working in many countries around the world identifying remains of victims of human rights violations, supporting processes of truth, justice and reparation.

Forensic anthropologist Luis Fondebrider, director of the EAAF, explained to IPS that despite the time that had passed, the bodies in the Darwin cemetery were in relatively good condition due to the work carried out in 1982 by British colonel Geoffrey Cardozo.

“When the war ended, Cardozo spent six weeks gathering all the bodies of Argentine soldiers who were on the battlefield or in the cemetery of Puerto Argentino (Port Stanley, capital of the Malvinas/Falklands). Then he resolved to create a military cemetery, with geat dignity and respect for the fallen,” said Fondebrider.

Fondebrider said that each body, before being buried was wrapped together with its belongings in three bags by Cardozo, who also made a map with references to the cemetery and a report.

That map and report were safeguarded by Cardozo for decades. In 2008, the British officer gave it to former Argentine combatant Julio Aro, when he visited London invited by a group of local war veterans.

Aro was obsessed with the need to identify the Argentine soldiers buried in the Malvinas/Falklands, and Cardozo knew that the documents would be of great help.

“I had returned to the Malvinas more than 25 years after the war to find a bit of the person I had left there in 1982,” Aro said.

“And when I saw those tombs with that inscription, I could not stand it,” he recalled.

Aro then began knocking on doors, convinced that one day the families who had never heard again from their loved ones could obtain an answer.

In 2011, when everything seemed more difficult than ever, Gaby Cociffi, a journalist who had covered the war and got involved in the project, was given the email address of British rock star Roger Waters, who was on a world tour that attracted crowds and would be performing in Buenos Aires the following year.

Waters quickly became publicly involved in the cause and, when he was received at the Casa Rosada government house by the then Argentine President Cristina Fernandez, he raised the issue.

It was then that Fernández took the issue into her own hands, and on Apr. 2, 2012, on the 30th anniversary of the beginning of the Malvinas/Falklands war, she announced that she had sent a letter to the ICRC, asking it to intercede with Great Britain to try to identify the Argentine soldiers.” Now, finally, their families can have peace.