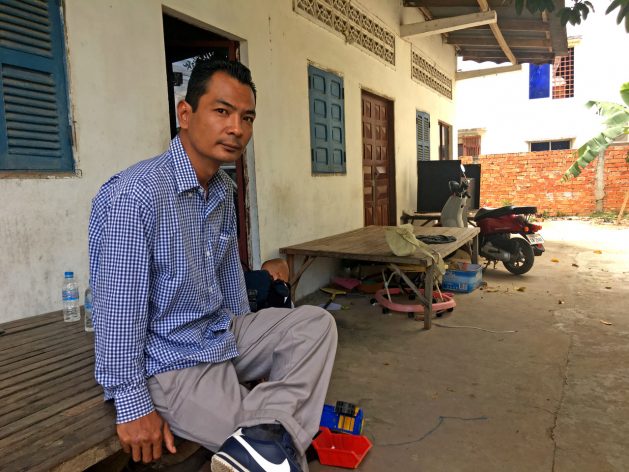 Chhean was four years old when he moved to the U.S. His impoverished and traumatised parents ended up in the margins of society. "Life was hard. We were a minority in a minority.”

PHNOM PENH, Cambodia, Jan 18 2018 (IPS) - Three friends are relaxing in a quiet courtyard. They speak English with a strong American accent and talk about their disadvantaged neighborhoods. Their tattoos depict a rough life on the street. One of them calls Massachusetts home, while the others grew up in Georgia.

But home is far away, on the other side of the world. They have been living in Cambodia for a number of years, against their will. They were deported by the U.S. Immigration and Customs Enforcement (ICE) to their country of origin, one completely unknown to them. Most have no or little knowledge of the Cambodian language, Khmer.

"Officially I'm Cambodian, but I don't feel that way. My home country is the U.S. but they don't want me there anymore." --Jock, 49

These American Cambodians belong to a group of more than 500 ‘deportees’ who have been sent back since 2002. They have lived the biggest part of their lives in the U.S. Their parents fled in the eighties, when Cambodia was torn apart by the genocidal Khmer Rouge and the following civil war. Between 1975 (start of the Khmer Rouge) and 1994 (end of the civil war) 158,000 Cambodians were allowed into the U.S.

“I was born in Thailand, in a refugee camp. Before I was deported, I had never visited Cambodia,” explains Chhean* (35). “I didn’t know nothing of this country. I didn’t speak Khmer. I grew in America, I am an American.”

Chhean was four years old when he moved to the U.S. His impoverished and traumatised parents ended up on the margins of society. “Life was hard. We were a minority in a minority. It was a tough time trying to survive, there was a lot of violence. I had to protect myself. That’s how I ended up in a gang.”

“I made bad choices. I was a threat to society. I can’t make no excuses, I can only blame myself.” After Chhean finished his time in prison, he was deported by ICE.

Five Years for a Fistfight

Legal residents in the U.S. who have no citizenship and get convicted for a crime can be sent back to their country of origin. No appeal is possible. The nature of the crime is not taken into account. “Immigration came to my home to detain me,” remembers Jock* (49). “I once got a conviction for a fistfight at school. I was 18. Twenty years later I get deported for a fistfight.”

Jock recounts what happened to him with disbelief. “I have spent five years in a cell, they thought I was an escape risk. Five years! For a fistfight 20 years ago! For years I have been begging them: ‘Please deport me’.” His friend Chhean was also incarcerated before his flight to Cambodia, but ‘only’ for two years.

Jock has been living in Cambodia for six years. He didn’t know the country at all. “I cried a long time when I arrived here. I thought my life was over. Someone who robs a bank is released after 15 years in prison and can start over again. I can’t.”

The deported Cambodians have trouble finding work. This country has a high rate of unemployment. They speak the local language badly and lack the necessary skills. Cambodia has an agrarian economy, but they are city boys. They are also met with distrust. They dress and behave differently. In Cambodian culture, their tattoos are considered signs of serious crimes.

“I worked the first six years in the rice fields. That is simple but hard work. I couldn’t find anything else,” says a deported Cambodian who wishes to stay anonymous. Last year, he acquired a certificate to teach English. He works in a classroom now.

“In the U.S. I worked in construction, but here it makes very little money. So I became a farmer,” explains Jock. “When I’m picking mangos, I can stop thinking.”

Chhean has familiar problems. “When I arrived here, I suffered from panic attacks. And even now I’m not adapted yet. Officially I’m Cambodian, but I don’t feel that way. My home country is the U.S. but they don’t want me there anymore. Now, Cambodia is my ‘land of opportunity’. I have to make the best of it. But I don’t plan big things for my life anymore.”

The U.S. government wants Cambodia to take back more of its ‘lost’ children. That is required by international law when Cambodians are deported. But the government in Phnom Penh is hesitant. These citizens have no sense of the culture and can never really integrate into society. Some have serious mental illnesses, says Jock.

“I know a mental ‘deportee’ in my neighborhood. He walks all day in the middle of the street. He doesn’t realize where he is, he thinks he is still in the U.S. They shouldn’t bring those people here.”

The families that found a new home in the U.S. in the eighties brought few belongings but many war traumas. “My parents survived famine and mass murder,” says the teacher. “They don’t talk about it much. They try to forget.”

Research by the Leitner Center in New York showed that 62 percent of Cambodian refugees in California suffered from post-traumatic stress disorder (PTSD). Fifty-two percent had severe depression. Many were in a state of shock and not able to take care of themselves or their children. They ended up in poor neighborhoods where crime was the norm.

For these specific circumstances, psychiatrists and lawyers say that refugees from Cambodia deserve special treatment. But President Donald Trump wants to increase the deportations. Some 1,900 are eligible for deportation, says ICE. In the “Kingdom of Wonder” – as Cambodians call their country – many refugees who return are confronted with alcohol and drug abuse. Many suffer from depression, and at least six deported Cambodians have committed suicide.

The teacher has a child in the U.S. as well. “I talk to her with Messenger. I can’t do much more. I can miss her as much as I like, it will not change a thing.”

Once deported, there is no way back. They can never visit the country where they grew up ever again. “Hell yeah! I would go back immediately if I could. Not tomorrow but today,” shouts Chhean jokingly.

His friend Jock has another view. “Once you have a criminal record in the U.S. they will never leave you in peace. I don’t want to go back. Period.”