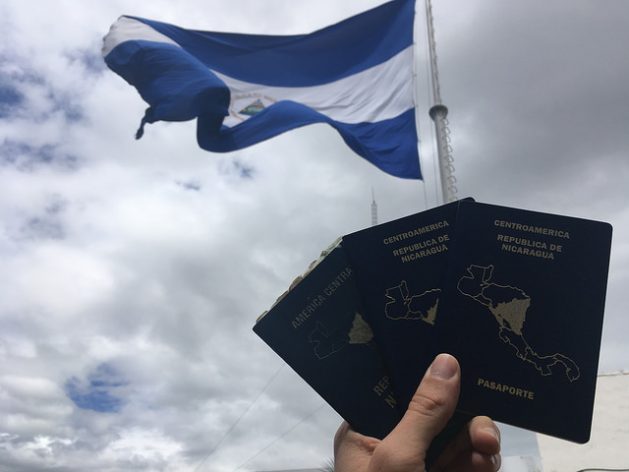 With a Nicaraguan flag in the background, passports from Nicaragua, with the silhouette of Central America on its cover, are held up. The country’s southern border with Costa Rica is closed by a "containment wall" policy that keeps out migrants travelling from South America towards the United States. Credit: José Adán Silva / IPS

MANAGUA, Feb 15 2018 (IPS) - Nicaragua’s “containment wall”, aimed at bolstering internal security, has been successful with regard to the fight against transnational crime. But its victims are migrants who are relentlessly blocked from passing through the country en route to their destination: the United States.

A situation that also represents a paradox, given that Nicaragua is the Central American country with the largest number of nationals living abroad, second only to El Salvador.

Roberto Orozco, a former social researcher at the Managua-based think tank Institute for Strategic Studies and Public Policies, and current independent consultant on security issues, reminded IPS that the origin of Nicaragua’s current migration policy lies in the crisis unleashed in the region in November 2015.

"It is an issue that often exceeds the capacity of a State more used to being a country that generates large numbers of migrants, than a country of transit or temporary stay of migrants." -- Ricardo de León Borges

At that time, a wave of migrants seeking to reach the United States before that country stiffened its immigration policy generated a crisis to which several Central American countries, as well as Colombia and Mexico, sought a solution.

But the government in Managua, headed since 2007 by the Sandinista National Liberation Front’s (FSLN) Daniel Ortega, refused to participate in joint actions to facilitate the mobility of the 3,000 Cubans who had been stranded in Costa Rica, on the border with Nicaragua.

This country deployed police and military troops, as well as border guards, to block access by the migrants, and created an unprecedented humanitarian crisis in the region, which was only solved with measures from other governments to allow migrants to continue their journey without passing through Nicaragua.

Ortega and Nicaragua’s military and police brass have explained that the containment wall consists of the coordinated use of the armed forces and the State institutions involved in the fight against organised crime: drug trafficking, terrorism, human trafficking, smuggling of undocumented migrants, and other threats to national security.

Orozco argued that the closure of Nicaragua’s southern border, blocking the passage of people – not of Cubans today, but of Africans, South Americans, and Haitians among others – has since late 2015 benefited Mexico, antechamber to the migrants’ target: the United States. It also benefited the U.S., Nicaragua’s main trade and aid partner.

But he questioned the effectiveness of the containment wall in reducing the flow of migrants through the continent, as well as the activity of the “coyotes” or human traffickers, and noted that there is a lack of official information on the matter, from government agencies, the police and the army, as IPS confirmed.

The only hard data was provided in September 2017 by the Nicaraguan army’s commander-in-chief, General Julio César Avilés, at a ceremony in Managua celebrating the anniversary of the armed forces.

“In the fight against illegal migration, 4,579 migrants were detained, the vast majority of whom came from countries in Africa and the Middle East, and were trying to reach the United States,” he said at the time. The International Organisation for Migration (IOM) states that some 800,000 citizens of Nicaragua live abroad and 40,000 migrate every year. The main reason for Nicaraguan emigration is poverty, which according to the latest World Bank figures affects 29.6 percent of the population. Credit: José Adán Silva / IPS

Ricardo de León Borge, dean of the Faculty of Legal Sciences and Humanities at the American College, told IPS that “indeed, Nicaragua’s immigration policy responds in the first place to safeguarding the interests of the Nicaraguan population, safeguarding their security and integrity within the national territory.”

In his opinion, the containment wall policy aims to “ensure that undocumented migrants move through our country in an orderly manner, so that they are not part of the sad statistics of people swindled by the ‘coyotes’ involved in a dangerous network of traffickers and organised crime.”

But De León Borge said that irregular migration is controlled not only with laws or hard-line policies. “It is an issue that often exceeds the capacity of a State more used to being a country that generates large numbers of migrants, than a country of transit or temporary stay of migrants,” he said.

But the academic stressed that the “iron fist” policy, beyond the issue of migration, has provided the desired effects in terms of security.

Nicaragua is now proud to have the highest safety rates in Central America: a homicide rate of six per 100,000 inhabitants in 2017, the lowest in the last 15 years, according to the National Police.

“Both Nicaragua, as well as its neighbours in Central America, Mexico and the United States, benefit from a containment wall that provides tangible results, based on the laws that govern the issue of migration against non-traditional threats to the security of States and people, such as drug trafficking, gangs, trafficking in persons or organs, and human smuggling,” De León Borge said.

However, behind the containment wall policy, abuses and violations of human rights are reported, according to the non-governmental Nicaraguan Centre for Human Rights.

Gonzalo Carrión, a lawyer with the NGO, told IPS that the Nicaraguan state has criminalised illegal migration and has made it more dangerous for travelers seeking to cross the country en route to the United States.

To illustrate, he mentioned three cases: the forced expulsion of thousands of Cubans and Africans at the end of 2015, the death by drowning of 12 African migrants in 2016, who sought to circumvent the controls through Lake Nicaragua, and the trial of a Cameroonian woman who was arrested in December 2017.

Marie Frinwie Atanga is originally from Cameroon and a resident of Belgium, from where she traveled to Nicaragua in 2017 to claim the body of her 20-year-old migrant son, who was shot dead in southern Nicaragua in an alleged clash between a border patrol and a group of “coyotes”, who were transporting migrants from Costa Rica to Honduras.

She was detained and accused of belonging to an international migrant smuggling ring, and could face up to 12 years in prison, which Carrión considers to be “a legal and moral barbarism of Nicaragua against migrants.”

In addition, under the containment wall policy, the authorities have prohibited local residents from helping migrants in transit and have even brought criminal charges – of collaboration with human trafficking – against people who have provided food, water or clothing to migrants who were abandoned by the coyotes and were in a risky situation.

For Carrión, the heavy-handed approach on migration runs counter to the history of Nicaragua, a country with a population of 6.3 million people, since 11 percent of its inhabitants live and work abroad, mainly in the United States, Costa Rica, Panama and Spain.

That, according to a 2017 report by the International Monetary Fund (IMF), makes it the second source of migrants from Central America, only behind El Salvador, which has 24 percent of its citizens abroad, while Honduras is third, with seven percent, followed by Guatemala (6.5 percent), Panama (four percent) and Costa Rica (3.5 percent).

Nicaragua has a poverty rate of 29.6 percent, according to the latest figures from the World Bank, which places it as one of the three poorest countries in the Americas. This year, this nation expects to receive 1.424 billion dollars in migrant remittances, 3.5 percent more than in 2017, according to data from the country’s Central Bank.