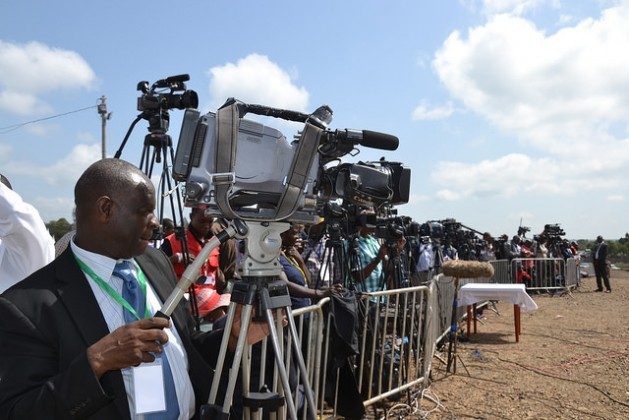 NAIROBI, Mar 13 2018 (IPS) - Freedom of the press in Kenya is facing its biggest challenge since independence, with government censorship on the rise both during and since last year’s general election.

"At the end of the day, the civic space is shrinking and democracy is suffering.” --George Nyabuga

English and Kiswahili are the preferred modes of communication, although vernacular languages feature in some of the media, especially those under the flagship of Royal Media services. Most of these outlets have an online presence.

Kenya’s hugely popular 2010 constitution has a robust Bill of Rights and a comprehensive Media Council Act (2013). The provisions seek to protect and regulate the media fraternity in the collection and dissemination of information. Just a few years ago, the UN recognized Kenya’s media vibrancy, but this scenario has gradually been eroded under the current administration.

For instance, the government orchestrated changes to the laws governing the sector by demanding the revelation of sources and forcing media houses to publish a weekly pullout containing the state’s development agenda as a precondition to earning advertising revenues from public institutions.

Gilbert Nakweya, a well-known freelance journalist based in Nairobi, noted that African election campaigns often feature bids to muzzle the media when the spotlight turns to government failures such as corruption, excessive use of force and other abuses. Kenya is not an exception.

“The recent 2017 protracted election in Kenya was filled with uncertainty, unleashing of propaganda and a characteristic media clampdown. For example, editors were summoned to the State House prior to crucial political events and ordered to skew their reporting in favor of the current government administration,” explained Nakweya.

Even if most editors ignored the command, this kind of pressure has a chilling effect on the media’ independence and integrity, he said.

George Nyabuga, associate director of the school of journalism and mass communication at the University of Nairobi, agrees that the Kenyan government is increasingly becoming intolerant of divergent views and criticism.

Earlier this year, it used the broadcasting of a mock oath of office by Raila Odinga, a former prime minister and the leader of the opposition, as an excuse to shut down four privately owned television stations for 10 days, which the government viewed as anti-Jubilee (the current ruling party).

Other journalists have expressed fears of being arrested. Kenya’s Minister of Interior confirmed at a press conference on Jan. 31 that authorities were investigating individuals and organizations, including media houses, in relation to the Nairobi event.

“Moreover, civil society organisations and individuals thought to be anti-government are also targeted,” Nyabuga told IPS. “There are also fears that the government is even targeting social media platforms. This is a serious affront to both media/press freedom and freedom of expression. And at the end of the day, the civic space is shrinking and democracy is suffering.”

Nyabuga worries about self-censorship in this climate of fear. Stories are killed because editors and journalists think they might offend the government and advertisers.

Nyabuga noted that academics can strengthen freedom of expression in Kenya through the creation of a platform for a discussion of important issues. Even the most critical voices must be given the space and opportunity to air their views.

“Media freedom is suffering and must be protected. The media is pandering to officialdom and commercialism. But commercialism and sustainability are critical to good and caring journalism. The safety and security of journalists must be guaranteed. The journalists and editors must be able to withstand government and advertisers’ pressure if it’s to remain relevant and especially as far as protecting the public interest.”

He added that even as the spaces for freedom of expression shrink, people have an opportunity to challenge commercial and established media hegemony and power.

“People can utilize social media to enhance their own freedoms. Of course, that freedom should come with responsibility. So that must be tempered with tolerance for difference and not be used for extreme views, terrorism, hate speech, etc,” he said.