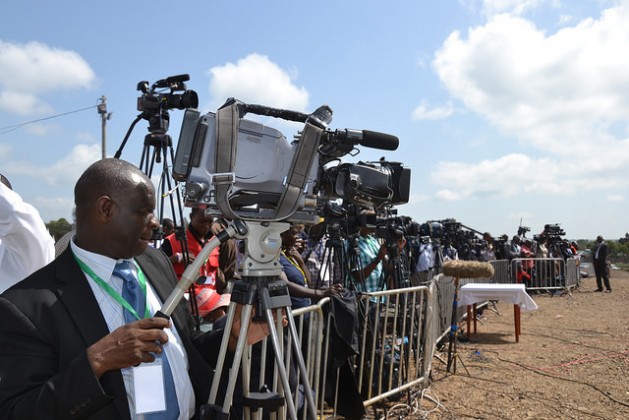 NAIROBI, May 2 2016 (IPS) - In early January, Judith Akolo, a journalist with the Kenya Broadcasting Corporation, found herself in unfamiliar territory when she was summoned and grilled by the Directorate of Criminal Investigations for retweeting a Twitter message.

The original tweet had been posted on Dec. 31, 2015, advertising jobs within the Directorate of Criminal Investigations (DCI) whose mandate is to investigate serious crimes.

Akolo says that she found it odd that the advertisement had been made public on the day of the deadline, which meant that the target group – the Kenya Police Service and the Administration Police – would most likely miss the opportunity to apply.

“Though Akolo was clearly not the original source of the tweet, that did not stop her from being grilled even though the owner of the original tweet was not questioned, perhaps because he is not a journalist,” Calvin Otieno, a media consultant, told IPS.

“The DCI wanted to know how she had landed the information even though it was very obvious that she had simply retweeted someone else’s tweet,” he added.

It was one of a series of journalist arrests this year, many related to posts on social media touching on corruption, land and security – which are Kenya’s three hottest and most controversial topics.

According to Henry Maina, the director of ARTICLE 19’s Eastern Africa office, which defends and promotes freedom of expression, explained that in the last three years there have been “more journalists sued by public officials than in the previous regime.”

“Attacks on media freedom should not be viewed in isolation of other human rights violations. When the media is silenced, this is the perfect environment for blatant attacks on all forms of human rights." -- Henry Maina of ARTICLE 19

He warned that the situation is likely to worsen as the country nears the 2017 general elections. “We are likely to see a social media shutdown similar to the Uganda situation,” Maina said, referring the Yoweri Museveni government’s social media blackout during the February 2016 elections.

In 2014 alone, journalists were threatened, intimidated, or beaten in at least 19 different incidents across Kenya, with police and government officials accounting for nearly all of the perpetrators.

Otieno says that this contributed to Kenya’s alarming drop in ranking in regard to the freedom of the press.

“The media is considered free based on the extent to which it is purely self-regulatory, which we do not have in Kenya, and also based on the kind of laws in place,” he said.

Reporters Without Borders’ 2016 World Press Freedom Index ranks Kenya 95 out of 180 countries.  It says that freedom of information in the country has “declined dramatically” since 2013, when the government appointed a press watchdog body called the Media Council with the power to withdraw press accreditation and impose huge fines on journalists and media outlets.

“In just three years since the current government ascended to power, there has been a drastic decline in freedom of information,” Otieno observed.

In 2014, the press freedom index showed that Kenya had dropped 19 places – one of the most notable falls in Africa alongside Mali, Central African Republic and Burundi. It was ranked 90 out of 190 countries surveyed in 2014.

Though the 2010 Constitution expanded freedom of expression and of the press, prohibiting the state from interfering with the editorial independence of individual journalists, state-owned and private media outlets, Maina decried the increasing onslaught on media freedom by the state.

Acting Executive Director for the Association of Media Women in Kenya (AMWIK) Marceline Nyambala told IPS that there is a lack of political good will based on laws passed since 2013.

“The Parliamentary powers and privileges Bill 2014  introduces stiffer penalties of about 5,000 dollars or a two-year jail term for journalists, as well as up to 200,000 dollars in fines for companies publishing information not favorable for the Members of Parliament,” she explained.

The contentious Security Laws (Amendment) Bill 2014 had a proposal that police must approve publication or broadcasting of information relating to investigations on terrorism.

Nyambala says that this proposed amendment was aimed at stopping investigative journalists from investigating the activities of the police when dealing with matters related to terrorism.

“The fact that the clauses were rejected has not stopped the state from harassing and intimidating journalists covering security and/or terrorism stories,” said Maina.

“We are the only country where the public is never given information when a terror attack has occurred, even when public resources are used to conduct investigations and produce a report,” he added.

He said that information is key as it helps citizens to engage better, protect their space and to coordinate with the state.

Maina said that the media is also ailing from within. “Issues of who pays for advertisements and who owns the media also affect media freedoms,” he added.

A significant number of media outlets are owned by politicians who use the media as their mouthpiece and have vested interests in what is aired or published.

Print media is largely guided by the 60/40 rule, that 60 percent of content must be advertisements and 40 percent editorial.

“The government is the single largest advertiser in this country and they are unlikely to advertise with those who do not cover them in good light,” he said.

He added that there is a growing intolerance of the media not just by the state but other institutions and that soon this intolerance will trickle down to ordinary citizens, who will begin to turn their wrath on the media.

“Attacks on media freedom should not be viewed in isolation of other human rights violations. When the media is silenced, this is the perfect environment for blatant attacks on all forms of human rights,” said Maina.