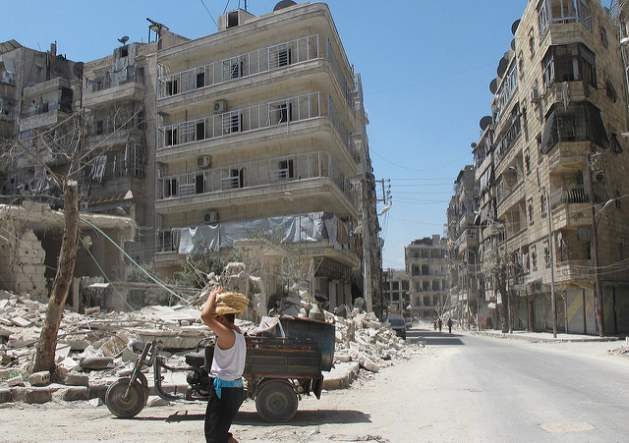 NEW YORK, Mar 22 2018 (IPS) - There is nothing controversial about saying the UN Security Council has failed Syria.

Diplomats have openly admitted it, journalists have written about it, human rights organizations have declared it – several times over in the past seven years. But what happened this week was deplorable and unacceptable, even by the very low standards we now have for the Council when it comes to Syria.

On Monday, the 15 member states of the Security Council gathered to hear a briefing on the human rights situation in Syria by UN High Commissioner for Human Rights, Zeid Ra’ad al- Hussein. But before he could start, Russia used its prerogative to call for a procedural vote on the agenda – effectively to stop the UN’s own human rights chief from telling the Council about the situation on the ground.

Russia claimed discussions on human rights are not pertinent to the Security Council’s agenda. Or in other words, the body charged with maintaining international peace and security is not a forum to discuss human rights violations taking place.

It may sound absurd, but this was not the first time Russia had made this claim. They tried the same tactic to block discussions on the human rights situations in other countries including Ukraine, and previously on Syria.

The difference is that this time, they won. They got the votes and successfully stopped High Commissioner Zeid from speaking.

Russia, China, Bolivia and Kazakhstan voted against the agenda, while the African countries on the Security Council – Ethiopia, Equatorial Guinea and Ivory Coast – abstained, leaving only seven countries in favour, one less than was needed for the briefing to happen.

This was a disgraceful moment for the Security Council. When it is blocked from simply discussing human rights in Syria, it has clearly lost all credibility to find a solution. Worse than that, it has become part of the problem.

Instead of using their power and influence to stop the war crimes taking place in Eastern Ghouta, Afrin, Idlib – Russia, and those Russia convinced of their warped logic, instead used it to suffocate discussion about those atrocities.

Members of the Council, led by France along with the USA, the UK, Sweden, Poland, Holland and Peru, quickly called for an informal meeting – known as an Arria Formula – and invited the High Commissioner to give his briefing outside the chamber in one of the UN conference rooms. All 15 members of the UNSC attended in another show of how dysfunctional the Council has become.

So what is happening in Syria that Russia and friends went to such lengths to prevent being discussed?

At the informal meeting, which will not be recorded as an official Security Council meeting, High Commissioner Zeid told it like it is. He begun by declaring definitively that “the Syrian conflict is characterized by its absolute disregard for even the most minimal standards of principle and law”.

The UN human rights chief went on to detail the gross violations taking place in different parts of Syria today, including the repeated targeting of civilians and civilian infrastructure by Syrian forces, with the backing of Russia.

The current siege on Eastern Ghouta by the Syrian government, Zeid said, involves “pervasive war crimes” including the use of chemical weaponry, enforced starvation, denial of aid and unjustifiable mass internment accompanied by torture and ill-treatment. To a lesser extent, he remarked, non-state armed groups are also committing crimes, including sexual violence.

Zeid then left member states with a reflection on what had happened earlier at the Council and Russia’s justification for blocking the briefing. He said an experienced colleague in the field had given him wise advice: “The severe human rights violations of today are the inevitable conflicts of tomorrow.” He went on to say that most conflicts begin when serious human rights violations open the way for unchecked policy decisions, including the waging of war.

Russia, China, Kazakhstan, Bolivia, Ivory Coast, Equatorial Guinea and Ethiopia – history will not forget this vote and the dangerous precedent it has set for human rights at the Security Council.

If only there were an initiative that committed member states not to vote against vital efforts to stop human rights atrocities, you might think?

Well guess what. There is.

The Accountability, Coherence and Transparency (ACT) group Code of Conduct on the Security Council politically and publicly commits its signatories not to block measures to prevent or end war crimes and other atrocities. It currently has 115 (out of 127) state signatories, including nine members of the Security Council. Kazakhstan and the Ivory Coast, either of whose vote would have been enough to allow this week’s briefing to happen, are signatories of the Code.

But the Code is not legally binding, and instead there was no place for a discussion on human rights at the Security Council this week. Most unjustly of all, the ones that pay the price for this colossal UN failure are the people in Syria being killed, maimed, starved and tortured every day.