GENEVA, Apr 30 2018 - The world is heading into troubled waters in the figurative and in the real sense of this expression, as we are witnessing an unprecedented movement of people – refugees, migrants and internally displaced persons (IDPs) alike – fleeing from insecurity, climate change, natural disasters, calamities and social instability. The migrant and refugee crisis has swept across the Middle East and across the Mediterranean Sea to Europe. It is becoming the 21st century’s most protracted crisis with no immediate solution in sight. Thousands of human beings undertake perilous and treacherous journeys in hope for a better and a safer future. Many of them perish during these hazardous journeys over the Mediterranean Sea which has become a liquid graveyard. 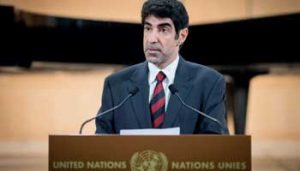 How can we forget the words the British-Somali poet Warsan Shire who said:

The traumas of the Second World War reminded the world of the importance of never ignoring the tragedies of the past. The contemporary crisis must not repeat them. It calls for concerted efforts to resolve the plight of refugees worldwide as a matter of urgency and to address the root causes of mass exodus, as a long-term strategy. It is particularly disturbing that the solidarity and unity – that were expressed to refugees who fled the horrors and calamities of the Second World War – are being withdrawn from today’s people on the move. In the MENA region, violent and extremist groups have brought bereavement to Arab countries. More than 10 million people have fled the region. Geopolitical power games and policies of “creative chaos” including unilateral coercive sanctions – fostered by outside powers and fuelled by insecurity and sectarian violence – force people to leave their home societies. Extremist groups hijack religions to confer legitimacy to their poisonous and heinous ideologies.

Although the current situation is not of their doing, other countries in the Middle East have carried the majority of the burden in hosting refugees and migrants from affected nations. The majority of the refugees in the MENA region have sought refuge in countries neighbouring their country of origin. In the case of Jordan, Amman has provided protection and assistance to refugees that add up to 20% of its own population.

This is percentage-wise the equivalent of China, the US and Russia hosting 276, 64 and 28 million people respectively. The socio-economic pressure on Jordan and other medium-to low-income countries hosting such a high proportion of refugees impacts adversely on the living standards of ordinary citizens. In the long-term, this could trigger another wave of desperate people crossing the Mediterranean Sea at their life’s peril.

A very limited degree of solidarity is being expressed by European countries. The number of refugees being granted protection in rich Western countries constitutes approximately 0.2% of Europe’s population. Despite being signatories to the 1951 Convention relating to the Status of Refugees, many countries have decided to openly defy the acceptance of refugees and migrants belonging to certain religious faiths within their societies. Walls have been built or are planned in a misconceived attempt to exclude refugees and migrants from entering certain countries. The fearmongering and scapegoating of refugees have likewise exacerbated the rise to a populist tidal wave due to a loss of confidence in Western countries towards the governing elites accused of being cut off from grassroots realities. Right-wing movements use the contemporary refugee crisis to confer legitimacy on their aspirations to political power through whipping up xenophobia and through conflating Islam with terrorism. The level of intolerance witnessed in many countries is alarming. Fearmongering about the “Other” is now becoming a successful political gambit. How can the tide be turned in favour of people on the move?

Affected societies must return to a climate in which diversity is embraced and celebrated. Societies both in the Arab region and in the West should stand united in addressing simultaneously the rise of violent extremism and of destructive forms of populism. A climate that is conducive to respecting the dignity of all communities and to the achievement of peace and stability in regions affected by conflict and violence must guide the endeavours of decision-makers. Changing people’s narratives and managing diversity is key to facilitating a successful integration process of displaced people in host societies and to overcome the worrying trend of generalization of toxic discourse against the “Other” that is gaining ground in many societies around the world. We must intensify dialogue between and within societies, civilizations and cultures. We need to learn more about one another and to break down the walls of ignorance and prejudice that have insulated societies. We need each other more than ever to overcome the 21st century’s most protracted crisis.

I would also like to call upon governments in the Middle East and in the West to work jointly to address the protracted refugee crisis. Rich countries have a moral responsibility to provide development assistance to poorer countries to achieve a more equitable burden-sharing arrangement for hosting refugees. Countries in the West and in the Middle East need likewise to step up their joint efforts to eliminate the root causes which have fuelled violent conflict and extremism. Peace and stability in the Middle East need to be restored before refugees can safely return to their home societies. This calls for a radical political change of approach in problem solving in the region. It requires that military interventions, unilateral coercive measures and “threats of destruction” are phased out as “solutions” to settle political disputes. The adverse impact of military interventions in Iraq, Syria and Libya stand as stark warnings that the unilateral use of force has brought chaos and destruction to societies.