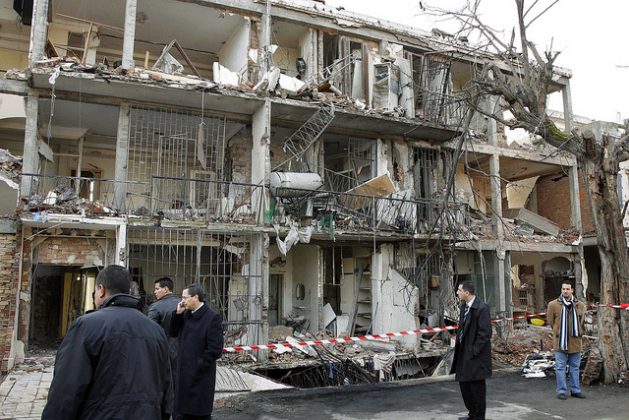 Al Qaeda in the Islamic Maghreb took credit for bombing of the United Nations headquarters in Algiers in December 2007, an act that claimed the lives of 17 U.N. personnel. The international community is increasingly recognising the importance of integrating a gender perspective into the global counter-terrorism efforts. Credit: UN Photo / Evan Schneider

UNITED NATIONS, Jul 12 2018 (IPS) - Understanding the different way that terrorists target women and how to prevent their recruitment could play a significant role in counter-terrorism efforts, and is gaining increased recognition among the international community.

“Any prevention programme should be fully mindful about its gender implications, and should be tailored toward understanding men and women’s grievances being exploited by recruiters,” Mattias Sundholm, communications adviser to the Counter-Terrorism Committee Executive Directorate, told IPS.

Hundreds of members of civil society and representatives of member states met at the United Nations Headquarters in New York at the end of June for the first High-Level Conference on Counter-Terrorism. During the two-day conference, the role of gender in counter-terrorism strategies was discussed in length.

A senior European Union official shared with IPS that “the international community is increasingly recognising the importance of integrating a gender perspective into the global counter-terrorism efforts.”

“Gender inequality and corruption, combined with the lack of information, no access to education and lack of understanding of what’s happening on the battlefield seem to play a role in the recruitment of women fighters,” the official said.

Despite the military setback of Islamic State of Iraq and the Levant (ISIL) in many Middle Eastern countries, countering its influence in the media and public opinion, along with Al-Qaeda’s power and Boko Haram’s attacks, remains a top priority for the U.N.

Last year, the General Assembly decided to implement the U.N. Global Counter-Terrorism Strategy and created the Office of Counter-Terrorism, while the establishment of a Global Network of Counter-terrorism coordinators was discussed. The theme of this year’s meeting was “Strengthening international cooperation to combat the evolving threat of terrorism,” with the goal of creating partnerships and finding practical solutions.

The way terrorists target men and women is different as they promise them particular rewards they find appealing.

“Extremist armed groups shrewdly exploit gender just as they exploit any other potential recruitment tool. For women, they may dangle the promise of adventure, travel, romance, commitment to a cause, and the possibility of being part of an extended family yet far from the yoke of immediate relatives. For men, the pitches are often more macho, complete with the promise of glory and multiple wives,” Letta Tayler, senior researcher on terrorism at Human Right’s Watch (HRW), told IPS.

Megan Manion, policy analyst with U.N. Women, explained men are often recruited as fighters with a promise that fighters get wives as a reward.  “Extremist groups also offer a salary for services of the fighters.”

But on the other hand, Manion explained, women are promised different things.

If terrorism strategies include gender-specific narratives, so should prevention plans.

“Women have a particularly influential role in families and can play an important role in preventing young people from radicalising,” the senior EU official said.

Thus, prevention strategies must raise to the level of terrorist strategies in terms of their nuances. “When extremist groups understand gender inequalities and the impact and power they hold, but we, those who are preventing violent extremism do not, there is a significant issue around identifying and responding to human rights violations, as well as serious security implications and risks,” Manion said.

When asked how prevention strategies should then be framed to be effective, Tayler firmly responded that any successful prevention strategy had to provide the same sense of belonging and thrill that groups like ISIL offered.

“That can only work if states stop marginalising communities and individuals who are vulnerable to recruitment,” Tayler said.

One of the ways to implement gender-specific strategies could be through the strengthening the role of women in law enforcement and policing both in terms of numbers but also on all hierarchical levels, the EU source said.

He argued in favour of reaching out to all communities, especially the de-radicalised ones.

“There is an important role for women religious leaders and local interfaith dialogue to build an environment which is less conducive to violent extremism,” he said.

Some civil organisations, such as the non-profit International Centre for Religion and Diplomacy, are already including religious actors in their counter-terrorism strategies.

Moreover, Sundholm, from the Counter-Terrorism Committee Executive Directorate, added that youth, and in particular girls, “should also be empowered to lead and participate in the design and implementation of prevention programmes.”

Tayler explained that at HRW gender was taken into account when the issue required it. For example, ISIL rapes or the sexual enslavement of Yezidi women require the counter-terrorism strategy to be very gender-specific. Another case would be Nigeria, where “women who managed to escape Boko Haram are reportedly being raped by Nigerian security forces who claim to be their rescuers.”

What should member states do?

Most experts and policy makers say that counter-terrorism should be the responsibility of U.N. member states, as they control borders and pass laws, which can either give privilege to or marginalise groups. Member states should also take the lead in including a gender perspective into their policies.

“Gender-mainstreaming should be integrated in the work and programmes of both Member States and the U.N.,” the EU source said.

Manion believes that member states hold the key to prevention.

“Repressive laws and lack of security, rule of law or good governance are powerful drivers for radicalisation for women and men,

“They must make sure that the laws they pass to respond to terrorist threats do not impose unreasonable burdens on women, including women civil society organisations who are often working on the front lines to identify and prevent radicalisation and re-integrate returnees,” she added.

However, Tayler warned that while gender should be a critical focus of counter-terrorism efforts, “neither the U.N. nor national governments should assume that being gender-sensitive is a panacea.”

“Ticking off the “gender” box alone is not an effective counterterrorism strategy. Authorities need to address the myriad root causes of terrorism,” she said.