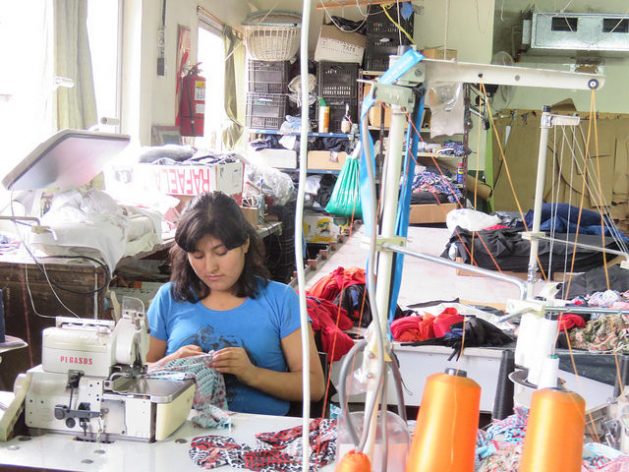 María Reina Gutiérrez was travelling from her native Bolivia to the capital of Argentina with her partner and her brother-in-law, the three of them "hired" by a textile sweatshop, when the bus overturned, the two men lost their lives and she lost a leg. She was forced to work in a wheelchair under slavery conditions and eventually was fired. Now, thanks to a solidarity-based cooperative, she sews clothes that are “free of human trafficking" and knows how to defend her labour and human rights. Credit: Fabiana Frayssinet/IPS

RIO DE JANEIRO, Jul 28 2018 (IPS) - The rescue earlier this month of 12 Venezuelan and three Colombian women from a prostitution network that recruits migrants in Peru is an example of the complex web where migration and human trafficking often involve victims of forced labour and sexual exploitation.

The sex trade ring that preys on migrants was dismantled by police in Peru on Jul. 4. Three of the women were minors.

According to the authorities of the South American country, the victims were reportedly recruited in Bogotá, where their tickets to Lima were paid, and then they were forced into prostitution to pay off a 1,000-dollar debt.

“Migration, both internal and international, is rooted in inequalities, human rights violations and other structural causes linked to socio-economic and cultural processes,” Cécile Blouin, a researcher with the Institute of Democracy and Human Rights at the Pontifical Catholic University of Peru, told IPS.

"In some cases, traffickers offer opportunities elsewhere. This is also intended to keep people away from their support networks so that they do not know where to turn for help. This uprooting effect intensifies when you go to another country and you don't know the culture and the language well." -- Rosilyne Borland

Speaking from Lima, the expert said that “in some contexts, migration can start as a trafficking situation from the outset, for example when a person is recruited for sexual exploitation from the country of origin.”

“In other cases, the migration process can take place without a prior recruitment or contract for a form of exploitation, but after they arrive in the destination country, they get into a situation of human trafficking due to a series of factors related to inequalities, violations of rights, socioeconomic conditions and so on,” she said.

According to the latest report by Peru’s Public Prosecutor’s Office, between 2014 and 2017, foreign victims of trafficking represented just over 10 per cent of the victims and came mostly from Colombia, followed by Ecuador and the Dominican Republic.

The socio-economic meltdown in Venezuela has led to a new wave of migrants from that country to Peru, some 280,000 up to May, but there are no specific figures on cases of trafficking.

July 30 is World Day Against Trafficking in Persons, a crime often linked to migration and also to the smuggling of migrants, as noted by the United Nations Office on Drugs and Crime (UNODC).

“If you look at large migratory flows, particularly those involving displaced persons or persons in irregular situations, there are likely to be a number of people who fall into the hands of trafficking networks,” said Rosilyne Borland of the International Organisation for Migration (IOM).

The regional thematic specialist on migrant assistance cited Venezuela’s massive migration flow as an example. “One can imagine that within the flow we can find a group of people who may fall into the hands of criminals. And we’ve seen that at present,” she said.

UNODC defines human trafficking as the transfer of human beings from one place to another within the borders of the same country or across borders for purposes of exploitation, mostly sexual, labour or for begging.

But trafficking in persons is not necessarily linked to migration, because people can be victims of this crime in their own country, said Borland from her office in San José, Costa Rica.

Signs of child victim of human trafficking and smuggling held by demonstrators during a protest in Mexico. The theme of this year’s World Day Against Trafficking in Persons, on Jul. 30, is to “responding to the trafficking of children and young people.”
Credit: CIMAC

“Having said that, we know that many victims of human trafficking did migrate at some point. What criminal networks are looking for is the possibility of capturing a person and subjecting them to exploitation, whether for forced labour or sexual exploitation. And sometimes migration is part of the process,” she added.

According to Borland, traffickers often deceive their victims with false promises of employment or other fake opportunities.

“In some cases, traffickers offer opportunities elsewhere. This is also intended to keep people away from their support networks so that they do not know where to turn for help. This uprooting effect intensifies when you go to another country and you don’t know the culture and the language well,” she said.

UNODC estimates that 2.5 million migrants are trafficked worldwide. But it points out that for each identified victim of trafficking, there are 20 more unregistered victims, bringing the number to 50 million.

Two-thirds of the identified victims are women, 79 per cent of whom are sexually exploited. The rest are linked to labour exploitation, forced labour or forced services.

The main countries of destination for the sexual exploitation of South American victims of trafficking are Spain, Italy, Portugal, France, the Netherlands, Germany, Austria and Switzerland, according to UNODC data.

There are no figures of how many Latin American migrants are trafficked to other parts of the world or between Latin American countries and within their own territories.

But according to Borland, the sectors where there are victims of this crime are agriculture, mining, construction and textiles, “which in some contexts are associated with flows of migrant workers, within a country or from other countries.”

María Antonia Chávez, of the Political and Social Studies Division of the University of Guadalajara, Mexico, which is part of the Latin American Observatory on Human Trafficking and Migrants Smuggling (ObservaLATrata), told IPS that there are two structural causes for the intersection between migration and trafficking.

Among them, she pointed out from Guadalajara, is the tightening of immigration requirements that encourages the hiring of coyotes or people smugglers.

“It is in this process that the possibility of people smuggling in relation to human trafficking appears as a risk for people who want to get a better chance at life or who want to reunite with their relatives in another country and do not meet the requirements for a visa,” she said.

On the other hand, sometimes traffickers use “trickery and deception” to move people from one country to another for the specific purpose of exploiting their work or services, she added.

Mexico, as a country of origin, transit and destination for legal and irregular migrants, is the second largest source of victims of trafficking to the United States and the world’s largest consumer of exploited people, according to Chávez.

But trafficking connected with migration also occurs within Latin America, the expert said.

Another case is that of Argentina, where “sexual exploitation and labor exploitation have increased” in the textile industry, with people mainly from Bolivia or Peru, Chávez said.