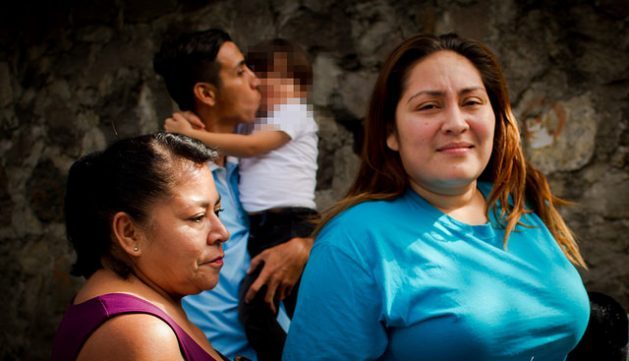 Katy Rodríguez and her son (in his father’s arms) when they were reunited after leaving the Migrant Assistance Centre in San Salvador following their deportation. Like thousands of other Central American families since April, mother and son were separated for four months after entering the United States without the proper documents. Credit: Edgardo Ayala/IPS

SAN SALVADOR, Jul 2 2018 (IPS) - After three hours of paperwork, Katy Rodriguez from El Salvador, who was deported from the United States, finally exited the government’s immigration facilities together with her young son and embraced family members who were waiting outside.

Rodríguez and her three-year-old son were reunited again on Jun. 28, just before she was sent back to her home country El Salvador. She is originally from Chalatenanango, in the central department of the same name.

The 29-year-old mother and her little boy spent more than four months apart after being detained on Feb. 19 for being intercepted without the proper documents in the U.S. state of Texas, where they entered the country from the Mexican border city of Reynosa.

“It’s been bad, very bad, everything we’ve been through, my son in one place and me in another,” Rodríguez told IPS in a brief statement before getting into a family car outside the Migrant Assistance Centre, where Salvadorans deported from both the United States and Mexico arrive.

She was informed she could apply for asylum, but that meant spending more time away from her son, and for that reason she chose to be deported. “I felt immense joy when they finally gave me my child,” she said with a faint smile..

Rodriguez was held in a detention centre on the outskirts of San Antonio, Texas, while her son was sent to a children’s shelter in far-flung New York City as a result of the “Zero Tolerance” policy on illegal immigration imposed in April by the Donald Trump administration.

The traumatic events experienced by Rodríguez and her son are similar to what has happened to thousands of families, most of them from Guatemala, Honduras and El Salvador, detained and separated on the southern U.S. border after Trump implemented the measure to, in theory, stem the flow of immigrants to the United States.

According to the Salvadoran General Migration Officete, between Jan. 1 and Jun. 27, 39 minors were deported from the US, either alone or accompanied, 1,020 from Mexico and five others from other locations. That figure of 1,064 is well below the 1,472 returned in the first half of 2017.

Of the 2,500 children separated from their parents or guardians on the southern border of the U.S. since April, just over 2,000 are still being held in detention centres and shelters in that country, according to the media and human rights organisations.

This is despite the fact that President Trump signed a decree on Jun. 20 putting an end to the separation of families.

Images of children locked up in cages created by metal fencing, crying and asking to see their parents, triggered an international outcry.

“The detention of children and the separation of families is comparable to the practice of torture under international law and U.S. law itself. There is an intention to inflict harm by the authorities for the purpose of coercion,” Erika Guevara, Amnesty International’s director for the Americas, told IPS from Mexico City.

The plane in which Rodríguez was deported carried another 132 migrants, including some 20 women, who told IPS about the abuses and human rights violations suffered in the detention centres. 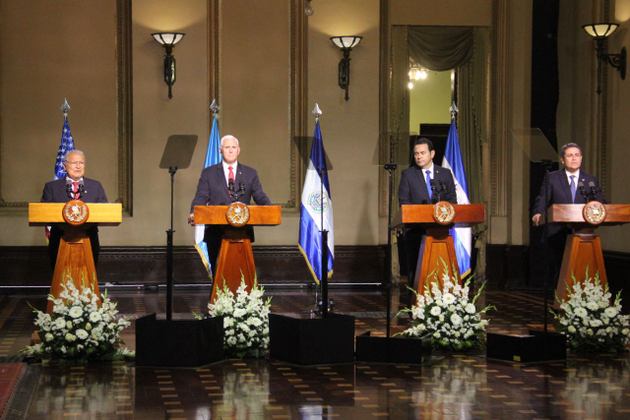 The presidents of El Salvador, Guatemala and Honduras and the vice president of the United States gave a press conference after a Jun. 28 meeting in Guatemala City on the issue of migration by undocumented Central Americans to the U.S.. Credit: Presidency of El Salvador

Carolina Díaz, 21, who worked in a maquiladora – export assembly plant – before migrating to the United States, told IPS that she was held for a day and a half in what migrants refer to as the “icebox” in McAllen,Texas.

The icebox is kept extremely cold on purpose, because the guards turn up the air conditioning as a form of punishment “for crossing the border without papers,” said Díaz, a native of Ciudad Arce, in the central department of La Libertad, El Salvador.

“You practically freeze to death there, with nothing to keep yourself warm with,” she added, saying she had decided to migrate “because of the economic situation, looking for a better future.”

To sleep, all they gave her was a thermal blanket that looked like a giant sheet of aluminum foil, she said. Another woman, who did not want to be identified, told IPS that she was held in the icebox for nine days without knowing exactly why.

Díaz also spent another day and a half in the “kennel,” as they refer to the metal cages where dozens of undocumented immigrants are held.

“When I was in the kennel, the guards made fun of us, they threw the food at us as if we were dogs, almost always stale bologna sandwiches,” she said.

Díaz said that in McAllen, as well as in a similar detention centre in Laredo, Texas, she saw many mothers who had been separated from their children, crying inconsolably.

“The mothers were traumatised by the pain of the separation,” she said.

Guevara of Amnesty International said Trump’s decree does not stop the separations, but only postpones them, and families will continue to be detained, including those seeking asylum.

“The president’s Jun. 20 decree does not say what they are going to do with the more than 2,000 children already separated, in a situation of disorder that is generating other human rights violations,” she said.

These violations include the failure to notify parents or guardians when children are transferred to other detention facilities.

She added that the United States has created the world’s largest immigrant detention system, and currently operates 115 centres with at least 300,000 people detained each year.

Meanwhile, Marleny Montenegro, a psychologist with the Migrations programme in Guatemala’s non-governmental Psychosocial Action and StudiesTeam, explained that children detained and separated from their parents suffer from depression, fear, anxiety and anguish, among other psychological issues.

“They are affected in their ability to trust, their insecurity and they have trouble reintegrating into the community and in communicating their feelings and thoughts,” Montenegro told IPS from the Guatemalan capital.

Pence’s aim at the Jun. 28 meeting was to obtain a commitment from the three governments to adopt policies to curb migration to the U.S. According the figures he cited, 150,000 Central Americans have arrived to the US. so far this year – an irregular migration flow that he said “must stop.”

In a joint statement, at the end of what they called “a frank dialogue” with Pence, the three Central American leaders expressed their willingness to work together with the United States on actions that prioritise the well-being of children and adolescents, family unity and the due process of law.

They also stressed the importance of working in a coordinated manner to inform nationals of their countries of the risks involved in irregular migration and to combat human trafficking and smuggling networks.