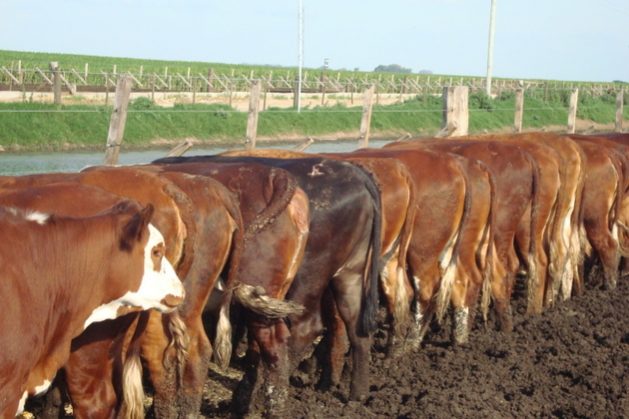 Cattle line up at a trough in a feedlot, which are now widely used in Argentina. Credit: Courtesy of Ana Garcia

BUENOS AIRES, Aug 6 2018 (IPS) - Beef is one of the symbols historically identified with Argentina. After lean years, production and exports are growing, as is the debate on the environmental impact of cattle, which is on the radar of environmentalists and actors in the agricultural value chain.

The problem of greenhouse gas (GHG) emissions – methane and nitrous oxide – from livestock farming has been raised since the 1992 Rio de Janeiro Earth Summit.

But “it was very hard to get Argentina to take it seriously,” veterinarian Guillermo Berra, who led the first research group on the subject at the governmental National Institute of Agricultural Technology (INTA), told IPS.

"The aim must be to improve the productivity of livestock systems. The weaning rate, which reflects the proportion of cows that produce the ideal of one calf per year that is ready to be fattened, is 60 percent, compared to 85 percent in the United States. Improving that rate would mean producing more meat with the same emissions." -- Sebastián Galbusera

“The intensification of production processes through feedlots has improved yields lately and has therefore contributed to reducing GHG emissions, but it has generated another problem, which is soil and groundwater pollution,” he explained.

According to the latest National GHG Inventory, which Argentina submitted last year to the United Nations Framework Convention on Climate Change (UNFCCC), agriculture and livestock raising, including deforestation, generates 39 percent of total emissions.

A significant detail emerges from the data: livestock farming is the subsector with the highest emissions, ahead of transport, emitting 76.41 million tons of carbon dioxide (CO2) equivalent per year, which represents 20.7 percent of the total.

‘Enteric fermentation’, which refers to the methane that cattle release into the atmosphere as a result of their normal digestion process, is the main source.

Sebastián Galbusera, who teaches environmental economics at the ‘Tres de Febrero’ National University, told IPS that “these results should come as no surprise in a country where farming is key. But they show us the complexity of the challenge of reducing emissions.”

“The aim must be to improve the productivity of livestock systems. The weaning rate, which reflects the proportion of cows that produce the ideal of one calf per year that is ready to be fattened, is 60 percent, compared to 85 percent in the United States. Improving that rate would mean producing more meat with the same emissions,” he added.

Argentina was the world’s largest exporter of beef at the beginning of the 20th century. However, in recent decades, livestock farming has not experienced the same technological development as agriculture, which has gained ground and relegated it to feedlots or marginal areas.

Osvaldo Barsky, a researcher on rural history in Argentina, told IPS that “with the incorporation of technologies and varieties, agriculture expanded to the best lands.”

“In livestock farming, the processes were slower and there were even times of decline, such as when President Néstor Kirchner (2003-2007) temporarily banned exports to curb the growth of domestic prices,” he said. 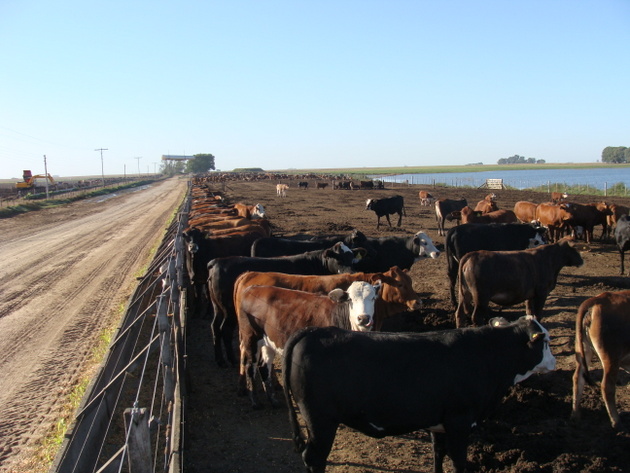 Livestock farming is responsible for the highest greenhouse gas emissions in Argentina, ahead of transport, emitting 76.41 million tons of carbon dioxide equivalent per year, which is 20.7 percent of the total. Credit: Courtesy of Ana Garcia

As a result, “there was a major drop in production, 10 million head of cattle were lost and neighbours like Uruguay and Paraguay overtook us in the international market,” said Barsky. Meanwhile, Brazil has become the world’s largest exporter of beef and poultry in the last two years.

Today, beef is one of the few sectors of economic activity where the government of Mauricio Macri, in office since December 2015, can show favourable figures.

Macri himself, in fact, led the bimonthly meeting of the National Beef Board, which brings together various state and private stakeholders, on Jul. 16.

According to official data, in the first five months of this year Argentina exported 60 percent more beef than in the same period in 2017: 121,277 tons against 75,934.

Government projections released on Jul. 19 indicate that the country will export 435,000 tons of beef this year, surpassing Uruguay and Paraguay for the first time in years, although still far behind Brazil, which will export some two million tons.

Currently, half of Argentina’s beef exports go to China, followed by Russia, Chile, Israel and Germany in that order.

Production is also growing, albeit at a slower pace.

Average domestic consumption of beef in this country of 44 million people, which at one point reached an average of 80 kg per person per year, fell due to competition from other kinds of meat, but is still high: 59 kg, according to updated figures from the Argentine Beef Promotion Institute (IPCVA).

Berra warns that “If we want to continue exporting in the long term, livestock production must not only be economically efficient but also environmentally sustainable and socially responsible.”

“Argentina, in the future, could be at a commercial disadvantage if environmental trade barriers are implemented,” he added.

In this sense, feedlots play a fundamental role. Extensive livestock farming and its pastoral image of cows grazing in open fields is becoming less and less common.

Feedlots, which began to be used in Argentina in the 1990s, allow for intensive meat production in less time and with less space.

Currently, 65 to 70 percent of the cattle that arrive at slaughterhouses in Argentina come from feedlots, Fernando Storni, general manager of the Argentine Feedlot Chamber, told IPS.

“This production method in Argentina is relatively new and regulations are still being designed. The disposal of livestock waste is only regulated in one province (Córdoba),” he added.

Storni said that “we are aware that we have to work on mitigating the impacts because the requirements are going to be increasingly strict at the international level.”

The issue is being followed with concern by researchers from the School of Agronomy of the University of Buenos Aires (UBA).

Ana García, who holds a PhD in Agricultural and Forestry Research and is a researcher at the UBA School of Agronomy, said that “it is urgent to regulate these activities because they have a negative impact on the environment and can affect human health.”

“I have been studying feedlots since 2004 and I see that there is no adequate treatment or final destination for problems that accumulate over the years. There is a lack of synchronisation of the production system with environmental criteria. You have to help producers to set criteria before you can demand it,” said Ileana Ciapparelli, a professor of Inorganic Chemistry at UBA.

She explained that “producers don’t know how to dispose of the feedlot solid waste and do what they can. Some use it to try to improve soil fertility but others leave it in piles, generating a source of methane emissions.”

Ciapparelli carried out a study that showed that hundreds of tons of manure deposited in clay soil generate concentrations of substances that can penetrate the soil up to more than a metre deep and contaminate groundwater, which in turn is connected to surface water bodies.

One of these substances is phosphorus, a nutrient that agricultural producers buy through fertilisers and that could be obtained from the waste from feedlots, which today contaminate watercourses.