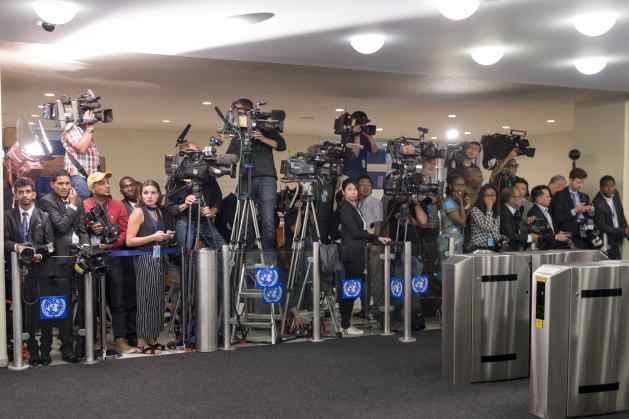 Although UN officials have argued that the reason for the withdrawal was his lack of adherence to guidelines every reporter has to follow for UN coverage, Lee’s accreditation predicament is not as straightforward as it may seem.

Throughout a running battle leading to his ban, he has argued he did not have the opportunity to be heard.  “This is a new low for the UN: no due process for journalists, no freedom of the press,” he told IPS.

Lee is perhaps only the third journalist to be banned from the UN, the other two being barred in the 1970s, one of them for harassing colleagues, and the other losing his credentials when Taiwan lost its UN membership to the People’s Republic of China in 1971, according to a veteran UN correspondent who has been covering the world body for over four decades.

Since his beginnings as a UN correspondent over 10 years ago, Lee has been known for asking thought-provoking questions during daily briefings and at press stakeouts. He has reported on global conflicts such as those in Sri Lanka, Congo, Somalia, and others, as well as news coverage within the UN.

For many people who worked within the UN framework, and even those who were simply fascinated by the unfolding events in the world body, Lee’s blog posts have been well-read and well-received, for the most part.

However, the incidents with Lee started back in 2012, when he was warned by the DPI to treat his fellow journalists with respect. At that time, nothing was done to affect his access to meetings and to his physical presence in the UN premises.

"Even if Lee was technically in violation of the UN's rules for non-resident correspondents, there was no reason for UN security guards to grab him and forcibly escort him out of the building, ripping his shirt in the process. It is never appropriate for security guards to use force against journalists."

Two years ago, things changed: he was in an interpreter’s booth recording a closed-door meeting of UN correspondents, without their consent. Then, DPI’s Media and Liaison Unit (MALU) made the decision to downgrade his accreditation from “resident correspondent” to “non-resident correspondent”, which means he was deprived of his own office space, barred from going to the UN on weekends and prevented from staying late hours and restricted from some areas in the building.

Although Lee believes this was “bogus reason” for the treatment he received, Farhan Haq, Deputy Spokesperson for the Secretary General, told IPS: “Matthew has come up with his own version on his website. But in that case I know to be true what I saw with my eyes”.

Despite the downgrading of his credentials, Lee continued reporting and asking abrasive questions during the noon press briefings.

Stéphane Dujarric, Spokesman for the Secretary General, along with the UN officer that had to deal with Lee’s questioning, has constantly repeated that they had no problem with his reporting, but with his behavior. It seemed that the change in his accreditation pass had no effect. “After that, the problems with his behavior did not subside”, said Haq.

On June 22nd, Lee had to be removed from the UN premises as he stayed long after his accreditation permitted him, and on July 3rd, he was similarly found long after 9 pm within a restricted area of the complex. UN Security removed him from the premises, but he apparently resisted.

According to Lee, that was an invalid reason, since he can cover specific meetings past 7 pm but UN representatives insist this situation was in breach of the UN press guidelines. UN Security grabbed Lee, who resisted, escorted him forcefully to the exit, ripping his shirt in the process. Lee also claims his laptop was damaged and his arm twisted by a UN security officer.

After that incident, his press accreditation was put under review and he was temporarily banned from UN headquarters. Many sympathized with him.

Peter Sterne, senior reporter at Freedom of the Press Foundation and managing editor of the US Press Freedom Tracker, told IPS: “Even if Lee was technically in violation of the UN’s rules for non-resident correspondents, there was no reason for UN security guards to grab him and forcibly escort him out of the building, ripping his shirt in the process. It is never appropriate for security guards to use force against journalists.”

Since that day, Lee has defiantly continued working outside the UN premises, with interviews being conducted in the sidewalks, with delegates and other officials on their way in or out of the building.

He also sends emails on a daily basis to the Office of the Spokesperson. His questions include policy matters, his suspension, and other issues.

On August 17, his press accreditation was permanently withdrawn, banning him from UN premises, and detailed in a four-page letter sent by Alison Smale, Under Secretary General for Global Communications.

Four mis-behaviours stood out: staying inside the complex past the hours he was allowed to, going to areas he was not supposed to be in, questionable behavior towards delegates and fellow journalists, “including videos/live broadcasts using profanities and derogatory assertions towards them without due regard to their dignity, privacy and integrity”.

In an interview with IPS, Haq said: “Of course, we respect his press rights, but we also want to respect other’s press rights. And some journalists feel their press rights have been impeded by his actions.”

At the noon press briefing on August 20, in the latest development in the ongoing saga, Dujarric was asked about Lee’s expulsion.

“Mr. Lee’s accreditation was — as a correspondent here – was revoked due to repeated incidents having to do with behaviour, with violation – violating the rules that all of you sign on to and accept when you receive your accreditation, rules that are, by far, self-policing.  We trust journalists to respect the rules.  The rules are clear, and they’re transparent.”

He added: “The removal of his accreditation had nothing to do with the content of his writing. The allegations include recording people without their consent, being found in the garage ramp late at night, using abusive and derogatory language towards people.”

On the same day, Lee shared with IPS his thoughts over Dujarric’s responses: “What he said today in the briefing makes it clear how little a case the UN has – I was in a garage? When? If so, my non resident correspondent pass worked to get there. ”

However, Haq told IPS: “The fact is that what we’ve been able to see is that he has a track record of different types of behavior that impede the activities of other journalists and members of member states, and he has created difficulties with security”.

He went on by stating: “I know for a fact that he has his own version of these events, but we have security records and cameras that do not coincide with his version of events”.

But Lee believes there is a conspiracy from the top of the United Nations to keep him silent: “They dug up everything they could, a real hit job, which I’m told comes right from the top: Guterres, who didn’t like my questions and writing that he was weak on the killings in Cameroon because he needed or wanted the support of the chair of the UN budget committee, Cameroon’s ambassador Tommo Monthe.”

Accusing the UN of conspiring against him, Lee said: “I am not going to allow Antonio Guterres, Alison Smale and Dujarric to prevent me from covering the UN. This is a shameful period for the UN, and I don’t intend to stop”, he claimed.

“I think large institutions like the UN need to be held accountable, including by journalists who daily ask them questions using information from those impacted (and sometimes injured) by the institutions.”

He added:  “This explains the approach I take with my reporting and I think it is appropriate and needed and that the UN has no right to try to hinder or prevent it.”

Meanwhile, in an interview with IPS, a veteran journalist in the UN press corps, speaking on condition of anonymity, said:  “Coverage of the United Nations is very important for the peoples of the world and the organization must facilitate journalists to do their job. After all, the UN is a tax-payer funded organization and its activities should be open and transparent.”

“But some rules have been devised, in consultations with the United Nations Correspondents’ Association (UNCA), the representative body of journalists, for orderly coverage of events.”

It is important to note, he said, that Lee is not a member of UNCA, and he has consistently criticized it. The veteran journalist went on: “There are do’s and don’ts for correspondents — for instance, journalists trying to get into closed-door or restricted meetings will be stopped. The elected president of UNCA will always put the first question at press conferences/news briefings. Journalists should not make statements, just ask questions, etc.”

Lee has not been the first journalist to be denied press accreditation, he pointed out. On the contrary, there have been more than two previous cases.

The veteran correspondent recalled that in the late 1970s, a journalist called Judy Joy sued UNCA for alleged irregularities in handling its funds. After a long and arduous process, UNCA was cleared of any mishandling but the association was left bankrupt due to lawyer fees.

Joy was not satisfied, and she said that the then UNCA president had threatened her for going to court, so the police picked up the president from his apartment early in the morning. But the case was proved bogus, as the president completely denied talking with Joy and she lacked any evidence. After that, the UN correspondents asked the UN to expel her to prevent her from further harassing her fellow journalists.

Another case he recalls was a political one: “After China’s entry to the UN in 1971, Beijing demanded the expulsion of Taiwan’s correspondent at the UN as its push for recognition of its goal of one China. Some western journalist protested, but the UN couldn’t do anything as it was also the demand of majority of member states.”

Other UN sources have mentioned another case during their time at the headquarters, in which a reporter’s accreditation was withdrawn for misbehaviors.

Nevertheless, Lee’s questions, directed to the Spokesperson’s Office, have been answered via email since he was expelled from the complex.

Haq explained: ““He sends us questions by email and we try to get them answered as best as we can. And we’ll keep doing that regardless where he is.”

However, Lee insisted: “Today’s UN is so corrupt they just look for a pretext to throw a critical journalist out. For life.”